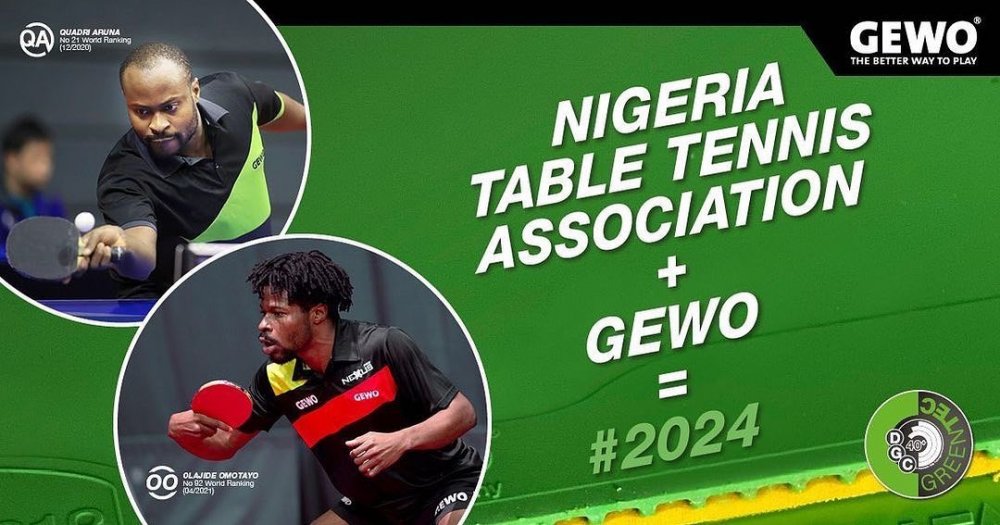 The deal was signed by the former President of NTTF, Ishaku Tikon while Florian Wehner signed on behalf of Gewo.

The three-year deal is meant to kit Nigeria national teams (junior and senior) to major competitions across the globe.

According to the new deal, Gewo is expected to provide ITTF approved equipment for the duration of the contract (2021-2024), while junior players will be supported with clothing, blades and rubbers.

Among the equipment expected to be provided by Gewo include tables, nets and balls.

For Tikon, the deal has again confirmed Nigeria’s place among the top table tennis nations as the management of Gewo were satisfied with the progress made by Nigerian players across the globe.

“We are excited about the new deal and we are also happy that the company has agreed to remain with Nigeria based on the stride made by our players across the globe. We are also satisfied with the service offered by Gewo in the last three years and they have shown commitment to the sport and we hope our players can continue to benefit from their support.

“Despite COVID-19 that affected the execution of the final year of the previous contract, all these have been incorporated in the new contract and we hope we can use this to raise the profile of the sport as well as support our players to major competitions,” Tikon added.

In a statement published on the social media of Gewo yesterday, the company expressed their willingness to continue to partner Nigeria.

“We are very pleased and proud to announce today, that the Nigeria Table Tennis Association prolonged their contract with GEWO until 2024 - at least. The GEWO stars Quadri Aruna and Olajide Omotayo will play at least the two coming Olympic Games in Tokyo and Paris in their #green GEWO shirts,” Gewo stated.