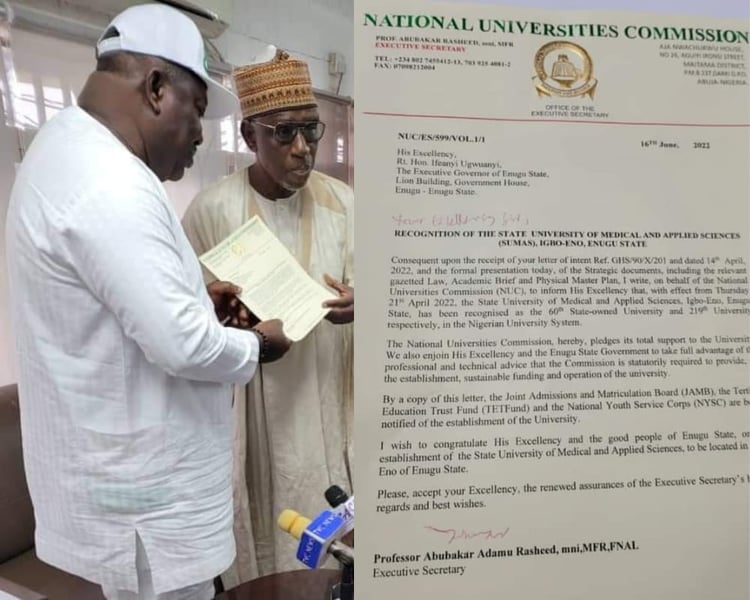 The National Universities Commission (NUC) has granted a license to Enugu State Government recognising the establishment of the State University of Medical and Applied Sciences (SUMAS), Igbo-Eno, Enugu State.

The license issued to Governor Ifeanyi Ugwuanyi of Enugu State at NUC headquarters, Abuja, was sequel to the enactment of the State University of Medical and Applied Sciences (SUMAS), Law, Igbo-Eno, Enugu State, on April 13, 2022.

Presenting the license, the Executive Secretary, NUC, Prof. Abubakar Adamu Rasheed, congratulated Gov. Ugwuanyi and the people of the state “on the establishment of the State University of Medical and Applied Sciences to be located in Igbo-Eno of Enugu State”.

The Law establishing SUMAS was presented to NUC by the Enugu State government alongside the Academic brief and Master Plan of the new University.

With the final stage of granting the license, Enugu State will now have a brand new, full-fledged, State-owned University of Medical and Applied Sciences (SUMAS) in Igbo-Eno.

SUMAS, Igbo-Eno has become the 59th State University in Nigeria. Enugu State with two State-owned Universities has now joined the league of states with more than one state University.

Reacting, the Deputy Chief of Staff, Government House, Enugu, Prof. Malachy Okwueze, who witnessed the presentation of the license to Gov. Ugwuanyi at the NUC headquarters, Abuja, said: "We can't thank the Governor Ifeanyi Ugwuanyi of Enugu State enough for achieving this goal of providing the platform for increased access to quality university education for our teeming youths who struggle year after year to gain admission into the university without fulfilling their desires and dreams for university education."

He added: "This is especially so for professional courses such as medicine. The existing Enugu State University of Science and Technology (ESUT) get over 2, 000 applications from our youths to study medicine but only a paltry 50  applicants (candidates) are offered access to study medicine at the end.

"Even the University of Nigeria Nsukka (UNN), the Federal University in Enugu State, offers only about 180 candidates admission into medicine leaving the dreams of thousands of our youths to study the course dashed year after year.

"This is despite the deficit in the number of medical doctors and nurses required to optimize medical and healthcare for our people".

Expressing the joy of the people of Enugu State over the feat recorded by Gov. Ugwuanyi’s administration, Prof. Okwueze disclosed that the state government has made provision for sustainable funding for the new University.

He added that "the stage is getting set for the handover and the official commissioning of the flyover bridge at the popular T-Junction, Nike Lake Road, Enugu, where traffic gridlock became every road user's nightmare before His Excellency intervened with a befitting flyover bridge delivered in record time to ease all worries on the road."