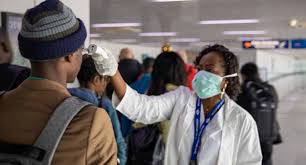 The number of coronavirus (COVID-19) infections in Africa is increasing rapidly against the backdrop of the discovery of the new Omicron variant, according to the Africa Centre for Infectious Diseases (Africa CDC).

John Nkengasong of Africa CDC said on Thursday that the new variant had been detected in Botswana, Ghana, Nigeria, and South Africa.

According to Nkengasong, however, it is still unknown how many people have been infected with the Omicron variant. He said the Africa CDC was concerned about the situation in southern Africa.

The supply of vaccines is improving but they are not being administered fast enough.

In Africa, only 7 per cent of the population has been fully vaccinated against the Coronavirus. The continent has now procured 417.5 million doses, of which only 235.8 million had been administered.

According to the CDC, a total of around 8.6 million infections had been registered in Africa so far, causing more than 223,000 deaths.

Meanwhile,experts say that the number of unreported cases in Africa, home to 1.3 billion people, is probably higher.

Nkengasong expressed concern over the holiday season and fears a sharp increase of COVID-19 numbers due to gatherings over Christmas and New Year.

The Africa CDC wants to increase the number of tests in Africa from the current 82 million to 200 million in the coming months.

Eleven African countries are fighting against the fourth wave of infection, while Mauritius is entering its fifth wave, according to the Africa CDC.

The Africa CDC is trying to pool the resources of African countries and coordinate measures in the fight against the pandemic.

They were being monitored, no further details were given.

“We need not panic, awareness is the need of the moment,’’ said Balram Bhargava, director of the Indian Council of Medical Research.

The two cases with the Omicron variant were of foreign nationals, both male, who arrived in Bengaluru in November, their contacts are being traced.

Putin Accuses US Of Prolonging Russia's War With Ukraine

Putin Accuses US Of Prolonging Russia's War With Ukraine