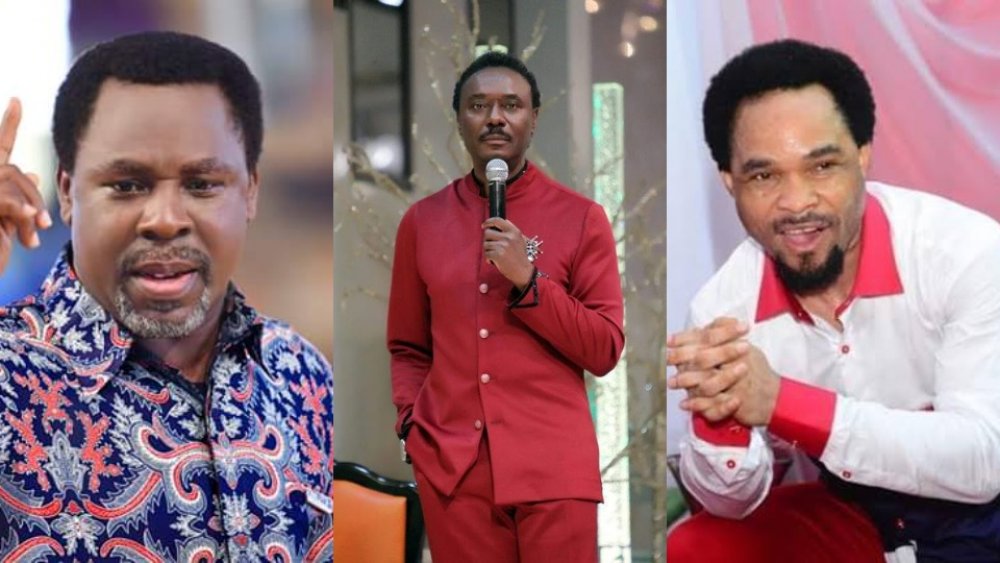 Prophet Chukwuemeka Odumeje has joined in the slamming of  Pastor Chris Okotie over comments on the life and times of deceased Prophet Temitope Joshua of the Synagogue.

Odumeje, the general overseer of Mountain of Holy Ghost Intervention Deliverance Ministry in a 12 minutes video warned Okotie to maintain his lane.

Recall Okotie, who superintends over Household of God Church in Lagos, had described Joshua as a ”magician”, ”sorcerer” and a “vicar of the devil on earth”.

He had said the late cleric likened himself to Christ by his name, conduct, and spiritual style. He also alleged that Joshua claimed he is the one the Lord's appointed to reconcile God and man.

In a Facebook church service monitored by AllNews Nigeria on Sunday, Odumeje said Okotie needs a serious slap to current his sense.

His words: “There is a man who doesn’t want the general to rest in peace and allow his family to mourn the general and the person is Chris Okotie. Young man, we have respected you enough, I have not seen you do anything in this life, save souls like TB Joshua did.

“And for you to come out to say TB Joshua was a devil and you began to analyse. Does answering Emmanuel mean I’m a devil? When I name my church synagogue because I have a right to bear the name of my father, does answering the name of Jesus mean you are Christ?

“When you can’t do what a man can do, you have no right to talk about him because you are not in the same level and you don’t have the same qualification and you are not in the same spiritual balance. Before you open your mouth to speak about a man you must have done what he did, but when you can’t do such things, then you are not qualified to talk against him because he is too far from you what you don’t understand don’t criticize it, what you need to do is to keep quiet. Talking against it makes you more childish. Chris Okotie I’m still warning you. English, is not our own language, go and deliver yourself first,” Odumeje said.

Speaking on Okotie’s presidential ambition Odumeje added, “When I hear you say you want to rule Nigeria, I see that you are suffering from insanity, and requires slap to correct the senses. I don’t reply to people with stories, I reply to them with a deadly spiritual weapons. Some men of God may call the police, but I don’t because I’m a man of power.”

"Enough is enough nobody speaks against TB Joshua. This is a warning don’t say I didn’t warn anybody. Go to any filling Station you won’t see someone roasting corn, nobody tries it because you will catch fire.”