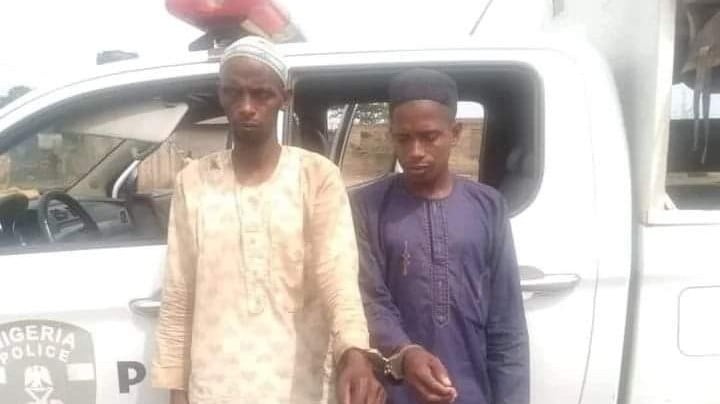 Suspected kidnappers have been smoked out of their hideouts within Iwoye and Idofa in the Imeko-Afon Local Government Area of Ogun State in a technical and intelligence-based investigation embarked upon by the police.

The suspects identified as Umar Usman and Muhammed Ibrahim, the Ogun State Police Command said, were arrested on March 19, 2022.

The suspects were said to have called one Suleiman Mohammed and threatened to kidnap him if he failed to raise N5,000,000 ransom for them within one week.

He was offered the option of selling off his cows to meet up with their demand.

Disturbed by the strange call made with a hidden number, the intended victim made for Imeko Police Division and narrated the goings-on.

"Upon the report, the DPO, CSP Ubine Eugine, moblised his detectives and embarked on technical and intelligence-based investigation which led the operatives to the criminal hideouts of the suspects at Iwoye and Idofa Forests, where they were picked up one after another", the Command's spokesman (PPRO), DSP Abimbola Oyeyemi, said in a press statement.

"Upon their arrest, it was discovered that one of the suspects is married to the intended victim's sister and volunteered information on his state of wealth to the gang.

"On interrogation, the suspects were said to have confessed to knowing the would-be victim very well, adding that they chose to act in that manner because if they sought financial assistance from him, he would not oblige them."

However the state Commissioner of Police, Lanre Bankole, has ordered the immediate transfer of the suspects to the Anti- kidnapping Unit of the State Criminal Investigation and Intelligence Department (SCIID) for discreet investigation, while directing that concerted efforts must be my to arrest other members of the gang.