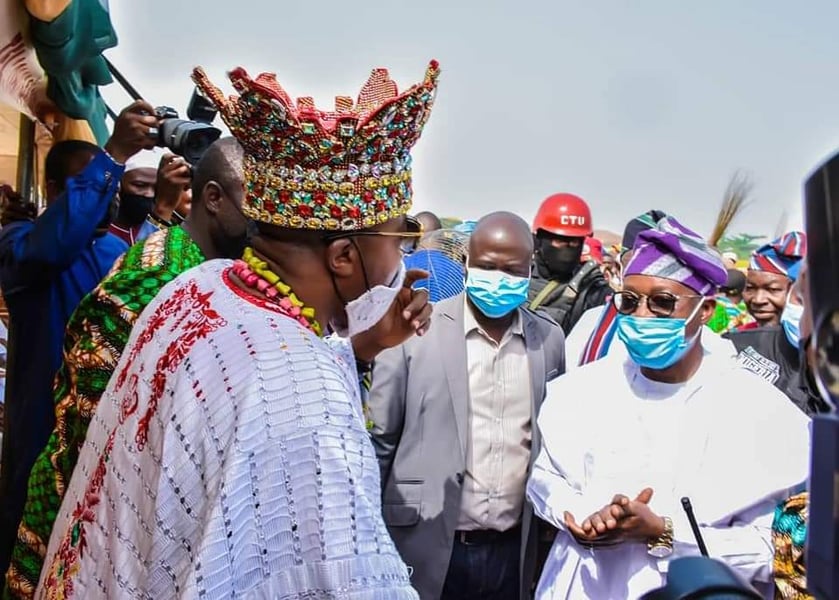 The Osun State Government had disowned a letter purportedly written by the Oluwo of Iwo land, Oba Abdulrasheed Adewale Akanbi requesting for the sum of twenty million Naira from Governor Adegboyega Oyetola for the financing of a proposed marriage to a princess from the Ado Bayero dynasty of Kano Emirate.

This is as the Osun government urged the people of the state to ignore all insinuations targeted at maligning the administration of governor Oyetola.

In a press release made available to AllNews by Funke Egbemode, the Commissioner for Information and Civic Orientation, the government which also revealed that it was aware that the monarch had denied being the author of the controversial letter stated that the letter was a fresh attempt by mischief makers to bring the governor and the citizens of the state on a collision course.

The government which stated that it was not surprising that such letter was being circulated now that the state was drawing closer to its gubernatorial primaries and election, warned individuals intent on making negative insinuations to put a stop to it.

The government maintained that the plot by the alleged mischief makers was dead on arrival adding that the community of sadists were increasing the tempo of their shameless propaganda machine.

The government also explained that it had put the welfare of citizens especially from Iwo ahead of politics and that the governor was a prudent manager of resources.

While noting that the citizens of the state were happy with the administration for addressing government neglect over the years, it held that mischief-makers resorted to blackmail due to the unprecedented welcome the governor was enjoyed as he toured the state.

The palace in a reaction also stated that the letter is a fake as it did not emanate from the palace.

In a press release signed by Oluwo's spokesperson, Alli Ibraheem, it noted that the letter lacked the basic in-house styles of Oluwo's palace correspondences.

"Oluwo always append his signature while writing the government. Equally, the font in the letter is not our official style. At the said date on the letter, Oluwo has not been in the state up till now. And his secretary has no audacity, whatsoever to sign on behalf of His Majesty while communicating with the government.

"The letter was orchestrated by mischievous people whose mission is to discredit the palace. Marriage is a personal affair. There is no marriage venture too big for Oluwo to finance on his own.

Those circulating such should exercise caution. A queen is coming but not in the haste of the public demand."

The letter from the Oluwo of Iwo, Oba Abdulrasheed Adewale Akanbi to the Osun State Governor, Adegboyega Oyetola is coming just days after the latter embarked on a strategic tour to Iwo.

The Oluwo during the tour had promised the governor that Iwo would give him massive support for his re-election.

It is worth noting that Moshood Adeoti, a frontline gubernatorial aspirant in the APC also hails from Iwo and he enjoys a massive follower base in the town.