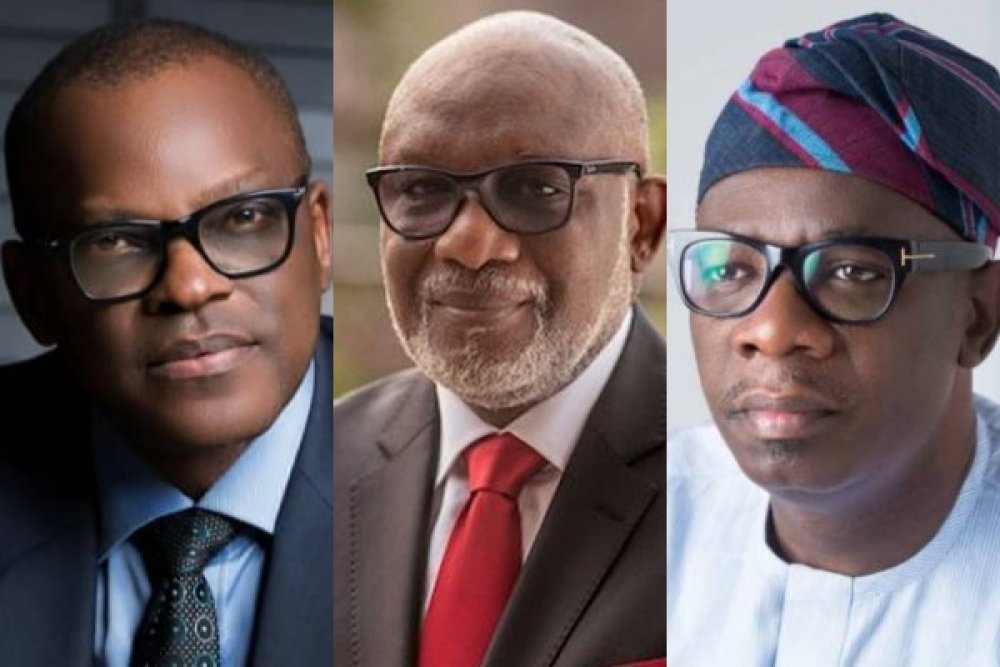 It is believed that three of the 17 candidates are favourites to win the Governorship election.

Below is a profile of the three candidates who have been tipped to be possible winners of the Governorship election.

Brief Profile: Rotimi Akeredolu the current Governor of Ondo state is a legal practitioner and a Nigerian politician who fully entered into the political terrane in 2011 after he contested as one of the aspirants to be Action Congress of Nigeria’s (CAN) governorship candidate at the Ondo Governorship election in 2013.

Emerging as the flag bearer of ACN at the election, Akeredolu who contested against the incumbent Governor Olusegun Mimiko failed to win his election bid.

However, in 2016 Akeredolu was awarded the Governorship ticket of the All Progressives Congress and defeated Eyitaayo Jegede of the Peoples Democratic Party (PDP) at the polls.

He then proceeded to the University of Ife (now Obafemi Awolowo University) to study Law, where He graduated in 1977 and was called to bar in 1978.

After graduating from law school in 1978, Akeredolu was appointed the Attorney General of Ondo State 12 years later serving as the state’s attorney between 1997 and 1999.

Advancing his legal career, Akeredolu became a Senior Advocate of Nigeria in 1998. Akeredolu who served as the Chairman of the Legal Aid Council between 2005 and 2006 became the President of Nigerian Bar Association in 2008.

Akeredolu will be seeking to defeat Eyitayo Jegede of PDP and his Ajayi Agboola, his deputy who left his camp to join Zenith Labour Party (ZLP) the party of former Governor Olusegun Mimiko.

Brief Profile: Eyitayo Jegede is another Legal practitioner in the Ondo Governorship election race. Being the flag bearer of the Peoples Democratic Party for the Second Time, Jegede will be looking to unseat Rotimi Akeredolu whom he lost to Back in 2016.

Eyitayo Jegede is a renowned legal practitioner and Nigerian politician who has been actively Involved in Ondo state politics.

Born to the family of Late Chief Johnson Bosede, the Odupetu of Isinkan, Jegede who started his academic pursuit at St Stephen's Primary school Modakeke in Ile Ife proceeded to Aquinas College in Akure where he had his secondary education between 1973 and 1978.

Jegede who was known to be a very active sport-man was a senior prefect at Aquinas college. He went ahead to Christ School in Ado Ekiti where he had his Higher school certificate Education.

He captained the school’s volleyball team both at Aquinas College and Christ School.

Moving on to the University of Lagos for his University education between 1980 and 1983, Jegede’s emergence as the institution’s volleyball captain was not a thing of surprise as he had been an active volleyball player from Aquinas College.

Jegede became a recognized lawyer after being called to bar at the Nigerian Law school Lagos in 1984.

He was in 1992 appointed a notary public by the then chief justice of Nigeria and became a Senior Advocate of Nigeria (SAN) 10 years after.

Jegede went ahead to establish his law firm in 1996 before taking his previous appointment as Chief Law officer in Ondo state.

He was in 2009 appointed as the Ondo state Attorney General and Commissioner for Justice.

Jegede who is also a one time chancellor of the Anglican communion will be looking to unseat the Incumbent Governor Rotimi Akeredolu who is a fellow legal practitioner and the candidate of the All Progressives Congress whom he lost to in 2016 at the forthcoming election.

Brief Profile: Agboola Ajayi the current Deputy Governor of the state is another major contender of the Governorship seat.

Ajayi who is another Legal practitioner in the Governorship race initially left the camp of his principal Rotimi Akeredolu to Peoples Democratic Party where he was hoping to get the Party’s governorship ticket. On losing the party’s primary election to Jegede, Ajayi further decamped to ZLP where he got the party’s ticket on a platter.

Ajayi who became more popular politically following his incessant fallout with Rotimi Akeredolu will be looking to bank on the influence of former Governor, Olusegun Mimiko to unseat his principal at the governorship poll. The Deputy Governor who is a Law graduate of Igbinedion University, started his elementary education at Kiribo in Ese Odo LGA, We went further to acquire his secondary education at Community High school Kiribo, before moving to Okitipupa local government where he completed his secondary education at Methodist high school.

After graduating from Igbinedion University, Ajayi went proceeded to the Nigerian law school and got called to bar after his graduation from law school in 2010.

Agboola's political career became recognized after he was appointed by the Social Democratic Party (SDP) as the party’s chairman in Old Apoi ward one between 1988 and 1992.

He was later made the secretary of Peoples Democratic Party in Ilaje/ Ese Odo Local government between 1998 when the party was formed and 1999.

In 2007, Agboola was elected to the Federal House of Representatives to represent Ilaje/Ese- Odo federal constituency.

Ajayi chaired the House Committee on NDDC while at the House of reps.

Ajayi who was elected alongside Akeredolu in 2016, will be looking to emerge as the state governor when the result of the Governorship election is announced.