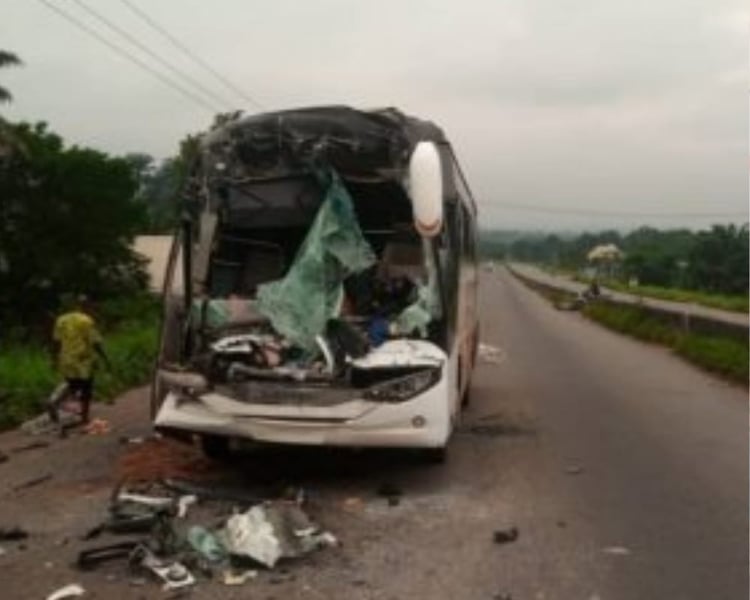 A road mishap on Ihiala-Owerri Road in Anambra State on Tuesday claimed the life of a bus conductor and injured four passengers.

Adeoye Irelewuyi, the Sector Commander of the Federal Road Safety Corps (FRSC) in Anambra, confirmed the incident in Awka.

Irelewuyi said the accident which occurred at about 5. a.m. was caused by fatigue and loss of control by the driver.

“The crash involved an unidentified driver of a white luxury bus with registration number NNE423XB and another vehicle which we were not able to get the details.

“According to an eyewitness, who is a passenger on the bus, the driver was tired and slept off while driving. He lost control of the vehicle and rammed into another vehicle in his front and crashed.

“The injured victims were taken to Our Lady of Lourdes Hospital in Ihiala, while the deceased was deposited at the hospital’s mortuary by the FRSC rescue team from Ihiala Unit Command, ” he said.

While condoling with the family of the deceased, Irelewuyi urged drivers to ensure observing rules and regulations guiding the use of road.

“Drivers need to take a minimum of 15 minutes after every four hours of driving to relax and energise themselves, it prevents fatigue,” he said.