One Year After #ENDSARS Protest, What Lies Ahead? 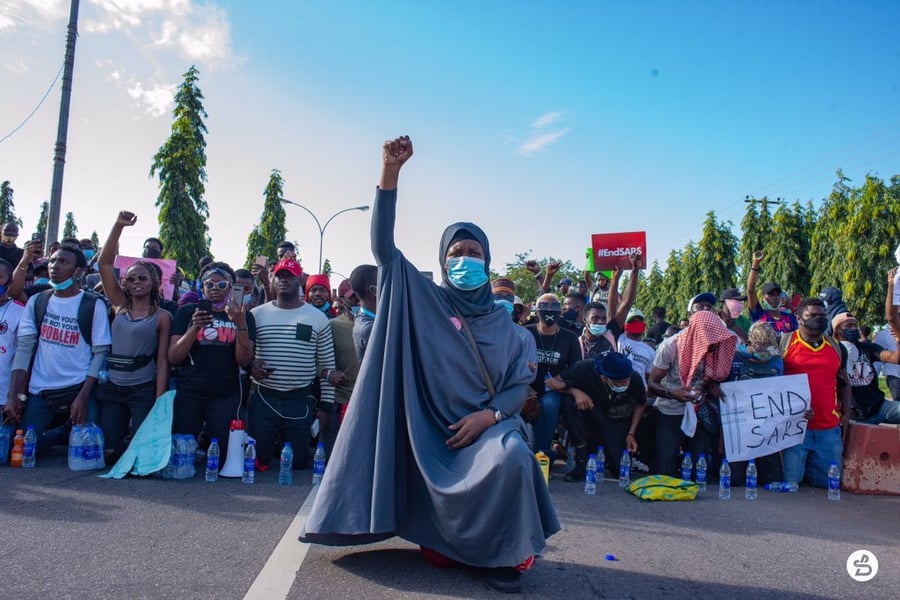 A year ago, #EndSARS protests erupted across Nigeria, with Abuja the Federal Capital not left out. The protests was sparked by many reported cases of police brutality and the illegal ways the Special Anti-Robbery Squad (SARS) a unit in the Nigerian Police Force, handles supposed criminal cases.

Police brutality is not unique to Nigeria. The menace is almost universal. It is the level of accountability and transparency in policing that makes the difference in some countries and this is apparently missing in the Nigeria Police Force.

The #ENDSARS protest was one way persons in the capital city tried to communicate with the government which in sane climes is okay, but not in Nigeria, as the powers that be do not want the judgment it deserves.

In Abuja, though the protest did not turn ugly, the protesters blocked the major road leading to the airport, causing heavy traffic on this axis, with persons spending a whole day on the road on their way from their respective workplaces.

The protests did not eliminate police brutality – and they could not have. But they undoubtedly brought to the fore the crudeness of some police officers and the rot which has pervaded the Nigerian police for years.

The major demands of the protesters in Abuja included the disbandment of the robbery squad, justice for victims of police brutality, and improved welfare of police officers. Incidents of brutality have been reported in the year since then. This has included a report by Amnesty International citing police brutality and human rights violations in southeast Nigeria from January to June 2021.

President Muhammadu Buhari took two weeks to respond to the protests, making a series of promises which included banning the Special Anti-Robbery Squad, bringing erring officers to book, and setting up committees of inquiry in all the states, including the Federal capital city, Abuja.

But many felt his response did not adequately address the issues raised by the protesters. Others also described the president’s address as grossly unapologetic.

The first decision taken in the wake of the protests was the disbanding of the tactical squad. However, nothing has been heard about erring officers being punished.

A Panel committee was set to investigate allegations of violation of human rights up to see to the situations which resulted in the protest. One can dare to say it did not work judiciously to carry out the task assigned.

The Abuja panel, despite being situated in the National Human Rights Commission (NHRC), did not have any substantial progress recorded over a long period.

The Suleiman Galadima-led panel sat in Abuja until March 24, 2021, when it declared a two-week Easter break but never resumed.

The hiatus was due to 'some logistics challenges' NHRC’s spokesperson, Fatima Mohammed, said in the commission’s statement, dismissing insinuations that the panel had fizzled out.

The panel was expected to take final written and oral addresses in eight petitions on Monday, the 18th October 2021, signalling the conclusion of the cases and adjournment for the panel’s report following the usual trend of last-minute hasty activities that most times overlook essentials.

The Inspector-General of Police, Usman Baba, in the aftermath of the protests, took up some acclaimed actions. This included recruiting more police officers to boost the understaffed force attempting to improve police legitimacy by dismantling roadblocks across the country. He also went on a nationwide tour of major police formations to boost the morale of officers.

The efficacy or otherwise of these attempts remains debatable.

The National Economic Council (NEC) headed by Vice President Yemi Osinbajo was said to have received updates on the reports from the Federal capital and others from Judicial Panels of Inquiry into the allegations of human rights violations against members of the Nigeria Police Force and other security agencies as long relating to the ENDSARS protests.

Following deliberations on the recommendations of the panels, NEC resolved that each State, in collaboration with the Federal Government, should establish modalities for the settlement of all monetary compensations awarded by the panels.

The council directed governors to immediately forward copies of final reports of the panels to their Attorneys-General for prompt arraignment and prosecution of all indicted persons.

Where incidents in the reports relate to matters of discipline in addition to prosecution, NEC urged the Nigeria Police Force to take disciplinary action on the affected officers in line with the provisions of the Police Act 2020. As we all know, the problem in Nigeria is not the making of rules or recommendations; it is the actual implementation of these rules, coupled with the bureaucracy.,This recommendation may take longer to achieve or possibly be abandoned.

On the efficiency of the NPF, NEC called on the leadership of the security agencies to ensure that persons recruited into arms-bearing security agencies undergo psychiatric evaluations and drug tests before enlistment and periodically after enlistment to ensure that they are psychologically fit to carry live weapons and to identify behavioural tendencies that may require psycho-social interventions.

The body further reiterated the need for Personnel of the agencies to dutifully observe the rules of engagement in the discharge of their functions/duties around and within the civilian populace while acknowledging the various initiatives introduced by the Federal Government to strengthen police accountability through the Police Service Commission, sustain improved funding and budgetary allocation to the Nigeria Police Force and other securities agencies, and the lifting of the ban on recruitment of police officers.

The council urged the Federal Government to give priority to the general welfare of police officers and personnel of other security agencies.

In particular, it advocated the review of pension and gratuity of retired police officers and attainment of parity of remuneration by police officers with sister security agencies.

The Council also seeks to undertake a comprehensive assessment of all police stations across the country with a view to ensuring that they are fit for purpose, adding that the Nigeria Police Force and other security agencies should deploy cutting-edge technology in the fight against crimes.

Also, all those detained by the police as a result of the EndSars protests are to be expeditiously processed with due regard to the principles of fair hearing.

While appreciating the role of lawful peaceful protests in the advancement of public discourse under democratic governance, the NEC has issued an advisory to the public, strongly advising those planning public protests across the country to mark the anniversary of the #EndSARS, to consider other lawful alternative means of engagement.

This the council claims is because of the current security situation across the country and the possibility of such protests being hijacked by armed hoodlums and other opportunistic criminals to cause mayhem at such protest events and venues.

It, therefore, urged the organizers to reconsider their plan, stating that the organizers of the planned protests should explore the various channels of communication with governments at various levels to advance their positions and avert the breakdown of law and order that may result from such public protests.

This advice may likely be adhered to as news of the planned protest in the Federal Capital has not been heard.