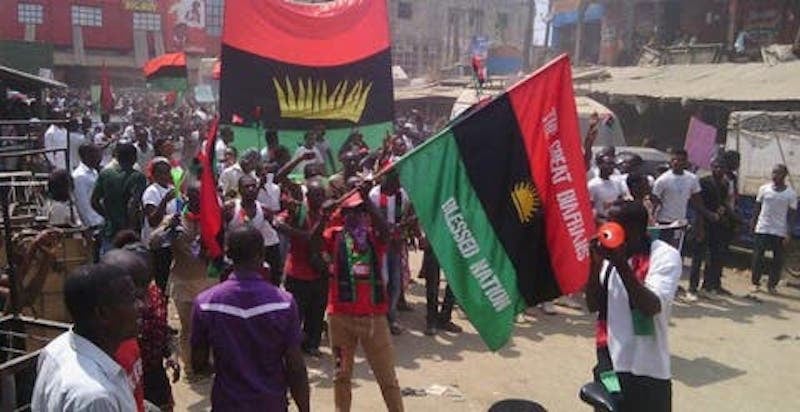 Suspected members of the Indigenous People of Biafra (IPOB) who hoisted the Biafran flag at Bakassi Local Government Area of Cross River State, have been arrested by a combined team of security personnels.

According to residents, the suspected IPOB members stormed the entrance gate to Bakassi Local Government Area, chased away security men, and hoisted their flag.

“By hoisting the Biafran flag, the boys may not know the consequences of their action. Some of these boys are ignorant, some are used by external forces.

“We have made them know that we are not taking their matter lightly. Security men have been deployed to the area. In fact, we have placed a temporary curfew in the local government area from 7 pm.”

He further complained of the deteriorating security situation in Bakassi, saying it is compounded by the failure of the government to fulfil its promise to ex-Niger Delta militants who downed their tools and embraced amnesty.

According to him, the Nigerian government asked the agitators to down their weapons and embrace amnesty, disclosing that more than 500 surrendered.

He added that the Economic Community of West African States (ECOWAS) in collaboration with the state government had picked nearly 160 and trained them to support themselves.

“The remaining ones don’t know when would be their turn and something is not also done to sustain them. So it’s difficult to stop them from harassing people to collect their valuables. Something should be given to them.

“We have done everything to curtail the activities of these boys. We used operatives to arrest them but the problem will never be stopped by that approach,” he said.

“The situation is so bad that I have not gone to work for the past one year because the council headquarters was completely raised down last year by people who are very disgruntled with the government. They burnt down the police station, brought down every government institution in the local government.

”As I speak, for more than one year I’ve not gone to work. I only work skeletally. Government should please come to my aid. We will not be able to remove these people from the local government without deliberate effort. The governor of Cross River State is trying his best but other people may join.

“Bakassi problem is a big one. Till today, there is no resettlement for the people. This is no compensation for the ceding of Bakassi Peninsula to Cameroon.”