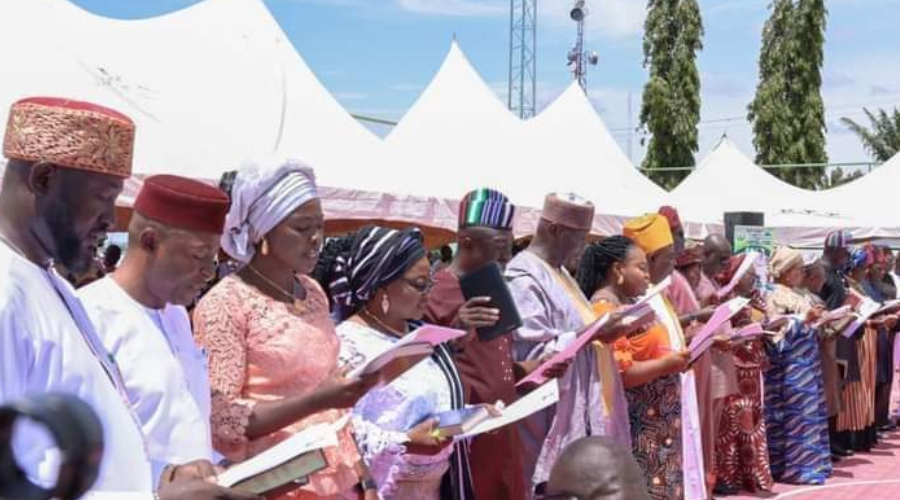 Cross section of the newly sworn in LG chairmen

Benue State Governor, Samuel Ortom has charged the 23 newly sworn-in Council Chairmen in the State to carry everyone along in running the administration of their respective local governments.

The Governor gave the charge on Wednesday, June 29, 2022, while inaugurating the elected local government Chairmen at the Benue Peoples House, Makurdi.

He urged the Chairmen to imbibe the culture of operating an inclusive administration, pointing out that they must always involve all Council members, stakeholders as well as the local government legislative members in decision-making in order to succeed.

The Governor tasked the Chairmen to give priority to payment of primary school teachers, local government area traditional councils.

"These and other statutory obligations should be put on first line charge to ensure the seamless operations of the local government councils.

"With your swearing-in today, you should bear in mind that the days of playing politics are over.

"Now is the time to concentrate on giving the electorate quality service because that is the reason for giving you their mandate.

"It is important for all of you to note at all times that we are in office because of the electorate and not for ourselves.

"We must therefore serve them faithfully, diligently and conscientiously because there is always the day to give account of our stewardship."

He further enjoined the Chairmen to keep abreast with all financial and other regulations guiding the conduct of their administrations and strictly adhere to them and also avoid unnecessary financial commitments which will lead to litigations.

He  cautioned them on embarking on any form of new projects and award of contracts but rather try to complete ongoing ones.

While lamenting the rising crime wave, insecurity and crises in some parts of the state, the governor charged the chairmen as chief security officers in their respective local governments to work in harmony with the police and other security agencies, traditional rulers, and community leaders towards nipping in the bud any form of crisis to guarantee peace.

Governor Ortom reminded the chairmen that the Open Grazing Prohibition Law is very much in force in the state and called on them to work hand-in-hand with security agencies as well as the Livestock Guards to enforce it.

The Governor also swore in Abulu Friday Abulu as Special Adviser to the Governor and Terna Demenongo Ayu as Permanent Secretary for the State Civil Service.

In separate remarks on behalf of their colleagues, Chairman Guma local government, Mike Uba and Special Adviser to Governor, Friday Abulu all pledged their readiness to work for the development of the state.