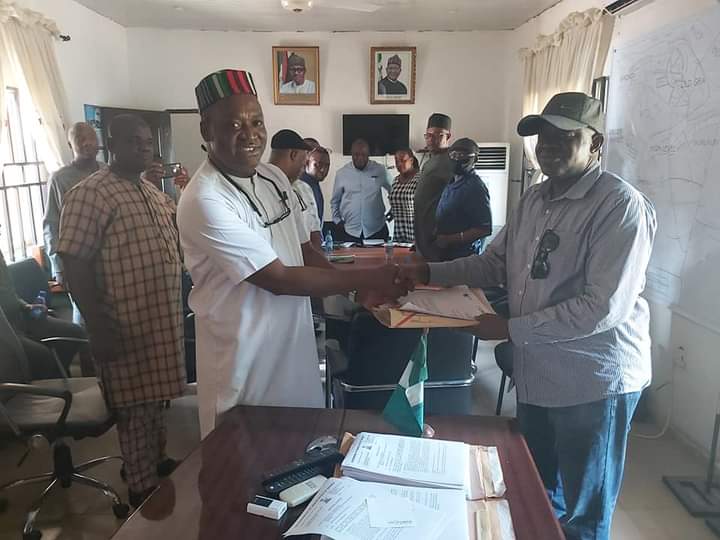 Dr. Godwin Emmanuel Oyiwona resumes office on Monday as the new Commissioner, Ministry of Water Resources and Environment, after a minor reshuffle by the Benue State Governor Samuel Ortom.

While the newly inaugurated commissioner, Honourable Engr. Jude Shachia Uungwa assumed office at the Ministry of Works and Transport at the Ministry's Headquarters in Makurdi.

Dr Oyiwona in his speech shortly after taking over from the Supervising Commissioner for the Ministry and Commissioner for Rural Development, Engr Victor Ukaha, thanked the State governor, Samuel Ortom for availing him the rare privilege to head four ministries under his administration namely, Ministries of Health and Human Services, Education, Energy, Science and Technology and now Water Resources and Environment, promising to justify the confidence reposed in him.

He assured the staff that he would carry everybody along as he always operates an open door administration that is based on transparency and accountability, urging them to be diligent and committed in the discharge of their responsibilities.

Earlier in his handover speech, immediate past supervising commissioner in charge of the ministry, Engr Ukaha congratulated Dr Oyiwona on his retention and redeployment to the new ministry, adding that the staff were very hardworking throughout the duration of his reign.

He said the Ministry is made up of three agencies headed by General managers and eight directorates headed by Director Generals, wishing him a successful administration.

At the ministry of Energy, Science and Technology where he handed over to his successor, Dr. Mrs Jane Ogoma Aja, the out-gone pioneer Commissioner of the ministry said, with the cooperation of the staff, he was able to record a lot of successes such as making Benue state to emerge Best in Science innovation at the recently held Science Innovation Expo in Abuja, produced students that will represent Nigeria in Ethiopia this year etc, urging his successor to continue from there.

He congratulated Mrs Aja on her appointment, wishing her a better performance as he was leaving the ministry better than he met it on assumption of office.

Dr. Mrs Aja in her response, appreciated her predecessor for the great achievements recorded under his leadership, promising to consolidate and by God's grace do more.

The permanent secretary of the ministry in her vote of thanks, promised the new Commissioner of maximum cooperation by members of staff, wishing both the out-gone and new Commissioners successful administrations.

Earlier in the day, Dr Oyiwona who was also the Supervising Commissioner, State Ministry of Education, was at the ministry where he handed over to the new head, Dr Sarwuan Tarnongo and charged him to continue with the good work he was known for while serving as an Adviser.

Dr Tarnongo in his taking over speech, thanked Dr Oyiwona for his positive impacts despite his short spell with the ministry, wishing him all the best in his new office.