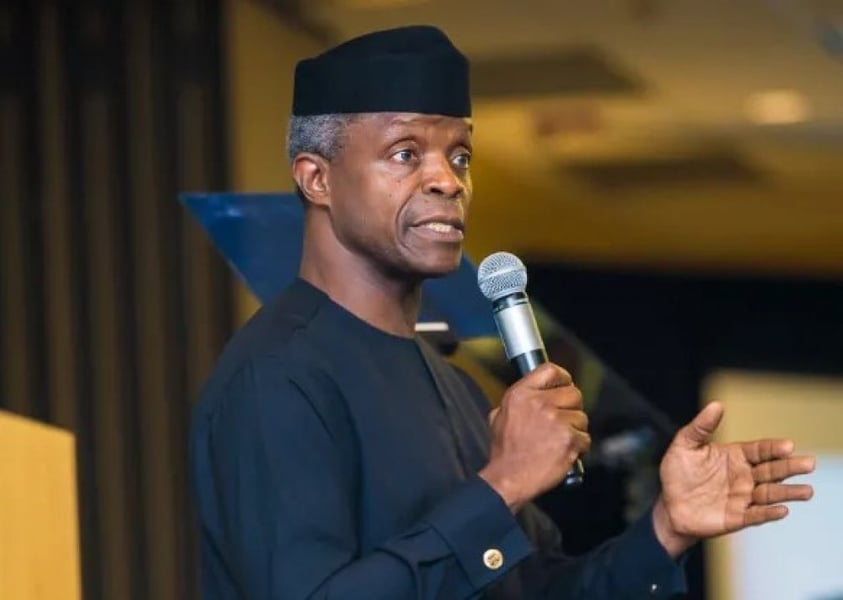 The Vice-President, Prof. Yemi Osinbajo, has commended Airtel on the launch of its SmartCash Payment Service Bank (PSB) targeted at closing the financial inclusion gap in the rural areas.

Osinbajo commended the telco on Thursday during the launch of Airtel SmartCash PSB at Victoria Island, Lagos.

Osinbajo, who was represented by Maryam Uwais, the Special Adviser to President Muhammadu Buhari on Social Investments, said that the launch of the SmartCash PSB, a subsidiary of Airtel Africa could not have come at a better time.

He said that Nigeria’s fintech industry had continued to visibly demonstrate progress, innovation and creativity of outstanding minds, rapidly becoming a model for other nations.

“I am delighted to join the telco in the celebration of a collective aim to take advantage of the fast evolving developments in financial technology space towards catalysing empowerment and economic growth.”

Osinbajo said that the innovation would ensure that no Nigerian was left behind, particularly those in underserved areas.

“I am here to applaud a commendable leap, which is aimed at exploring vast opportunities and possibilities in the digital age for the benefit of the majority of our fellow citizens.

“The Federal Government of Nigeria has also remained committed to ensuring that all citizens have access to the financial services and credit facilities, across every nook and crannies of the country,” he said.

Similarly, Gov. Babajide Sanwo-Olu of Lagos State, who also commended the telco, said that the SmartCash PSB would further deepen efforts in the area of financial inclusion.

Sanwo-Olu, who was represented by Rabiu Olowo, the Commissioner for Finance, said that the PSB license which was approved by the Central Bank of Nigeria (CBN) was targeted solely for those in remote areas, the underbanked and many Nigerians who reside in Lagos.

”I am sure that we would not be surprised that countless Nigerians do not have a bank account because they believe that banks are too far or for the rich and educated.

“Some others believe that the little they make is not sufficient enough to save in the bank.

“I, therefore, commend the CBN for coming up with this initiative that is providing a platform that caters to the financial needs of the underserved and underbanked population in Nigeria,” Sanwo-Olu said.

He said that the structure that had been put in place by Airtel was one that was simple, cost effective and would absolutely be impactful in bridging financial divide.

The governor said he had no doubt that Airtel would live up to the expectations of regulators and ordinary Nigerians who would see the innovation as a life changing one.

The Managing Director of Airtel Africa, Segun Ogunsanya, said the innovation of the Airtel SmartCash was their contribution to reduce the financial gap in the country.

“The aim of the innovation is also to bring millions of people in the rural and urban area into the financial community by transforming their lives.

“The SmartCash is cost effective and your money is safe with us, there would be no issue of hackers.

“The launch of the innovation is a confirmation of our commitment to touching lives,” he said.

Ogunsanya said that the telco also planned to bring out 55 per cent of underbanked people into the financial system.

He said that the telco would work with the CBN to ensure that no Nigerian was left out of the financial system.

Also, the Managing Director of Airtel SmartCash PSB, Muyiwa Ebitanmi, said that their goal was to deepen financial inclusion by removing barriers and improving accessibility in the rural areas in Nigeria.

“Today is indeed a special day that will mark the transformation of financial services,” he said.