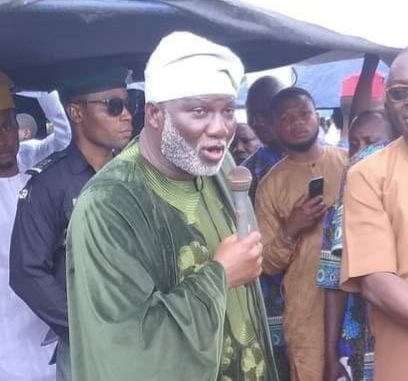 The All Progressives Congress (APC) in the state of Osun has described as spineless, bunkum and wishy-washy, the statement credited to the former Deputy Speaker, House of Representatives, Lasun Yusuf, that "the APC didn't win the 2018 governorship election which brought Governor Gboyega Oyetola into office".

The party dismissed the statement in totality, saying such claims could only come from a very desperate, dishonourable and selfish politician, seeking public attention by misleading the citizenry.

Oyatomi noted that Yusuf is seriously in need of medical examination as there is no iota of truth in his incoherent allegation, and the onus of proof is his responsibility.

This reaction was contained in a statement issued from the party's Directorate of Publicity, Research and Strategy and signed by its Director, Kunle Oyatomi and made available to newsmen on Thursday in Osogbo the state capital.

Oyatomi explained that 'it is absurd and unthinkable that Yusuf, as the former Deputy Speaker of the National Assembly could stoop so low to the extent of alleging that his party (if he's loyal member at all) of rigged the 2018 governorship election just because he contested the party primary election and lost woefully to Gboyega Oyetola.

Hon Lasun only contested with Gboyega Oyetola and 25 others in the Osun APC primary election in all the 332 wards in the state and he, Lasun, lost the election.

"In Osun APC, we don't follow the throng and ignore the law. So, what can be more 'popular' as claimed by Yusuff, than where lawful members in all the wards in the state-endorsed Adegboyega Oyetola as their gubernatorial candidate. Is direct primary against the party's rules? Yusuff should stop hallucinating because we followed the rules and the directives given by the party at the National Headquarters, Abuja which is in tandem with the constitution of our party as contained in Article 20".

According to Oyatomi, "In the primary, which is the direct, transparent and credible primary which was conducted and supervised by Senator Ovie Omo Agege, on 21st of July 2018, 27 aspirants contested, Gboyega Oyetola polled the highest votes of 127,017 and came first as against the House of Representatives Deputy Speaker, Yusuf, who had miserable 21,000 votes and came a distant second, he was even defeated by Gboyega Oyetola in his home, Irepodun local government council area of the state".

Also, in the Osun Governorship election which brought Governor Oyetola into office, the All Progressives Congress (APC) candidate won free, fair and square to defeat his main opponent, Ademola Adeleke of the PDP. Not only that, but the Supreme Court also confirmed Oyetola's victory.

The APC challenged Yusuff to come straight with the facts and figures to contradict what's known to all Nigerians and the law of the land.