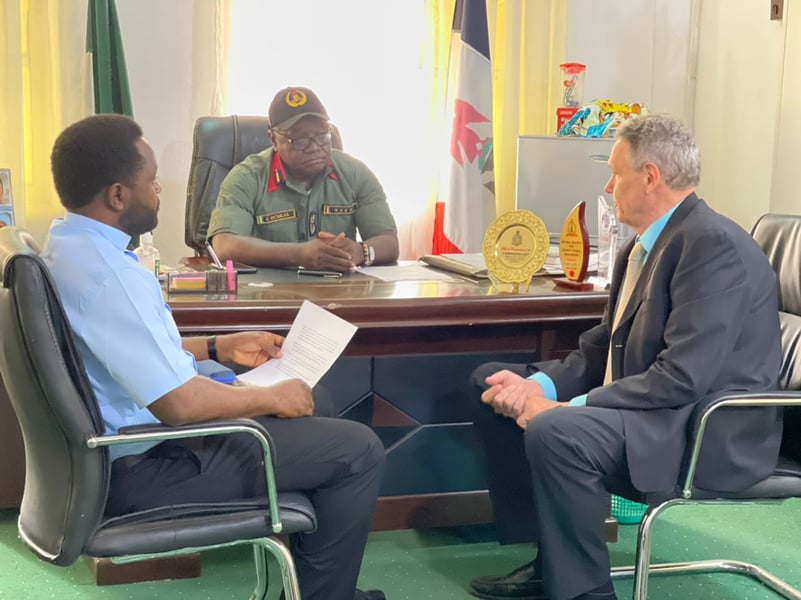 The National Democratic Institute (NDI) has advocated for the increase of women participation in the political process during the July 16, Osun gubernatorial election.

This call was made by Stephen Snook, the Chief of Party of the institute during an advocacy visit to Emmanuel Ocheja, the Commandant, Nigerian Security and Civil Defence Corps (NSCDC), Osun State Command.

The NDI is in collaboration with Justice Development and Peace Makers Centre (JDPMC).

While making the purpose of their visit known, Snook said women and youth play a substantive and crucial role in sustaining and building peace, hence the need to understand the challenges facing women during elections.

According to the delegation, NDI is planning to collaborate with NSCDC during the July 16 Osun gubernatorial elections for effective monitoring of security and a situation room will be a proactive measure to swiftly respond to emergencies and to rescue electoral violence victims.

According to the delegation, NDI is supporting JDPMC to collaborate with NSCDC during the July 16 Osun gubernatorial elections  to set up the Election Security Monitoring Rapid Response Centre, effective monitoring of security during the polls and to track and respond to incidents of violence, especially cases of violence targeted at women during the electioneering activities in Osun State.

Snook also stated that the visit was to have a robust understanding on the emerging issues that may have direct or indirect consequences on women during the forthcoming election.

He stressed that it is imperative women would develop mechanisms to counter any form of violence during the electoral process.

Also speaking, the General Coordinator of Justice Development and Peace Makers Centre (JDPMC), Reverend Father Peter Akinkunmi made it known that the roles of NSCDC during elections in the country can never be underestimated.

He praised personnel of the Corps for their humility and integrity while discharging their duties.

Programme Officer of the Stop-Violence Against Women in Politics (Stop-VAWIP) stated that the campaign is deploying a toll free hotline to record, track and refer incidents to the NSCDC centre, through its Stop-VAWIP Case Tracking and Response Centre (CTRC), provide media channels for NSCDC to disseminate deterrence message to potential perpetrators of violence leveraging on weekly live radio town hall, billboards, posters and community watchers.

In his response, the Commandant of Corps, Emmanuel Ocheja appreciated the delegation for deeming it fit to partner with NSCDC before, during and after the elections.

Ocheja assured the delegation of his readiness to build alliances with relevant stakeholders in electoral process to ensure that rights of citizens are not violated.

"The Command has been working assiduously.

"We are still ready to work closely with NDI and other credible partners for more effective service delivery."

Ocheja assured the citizens of the security of lives and property during and after the elections in the state.