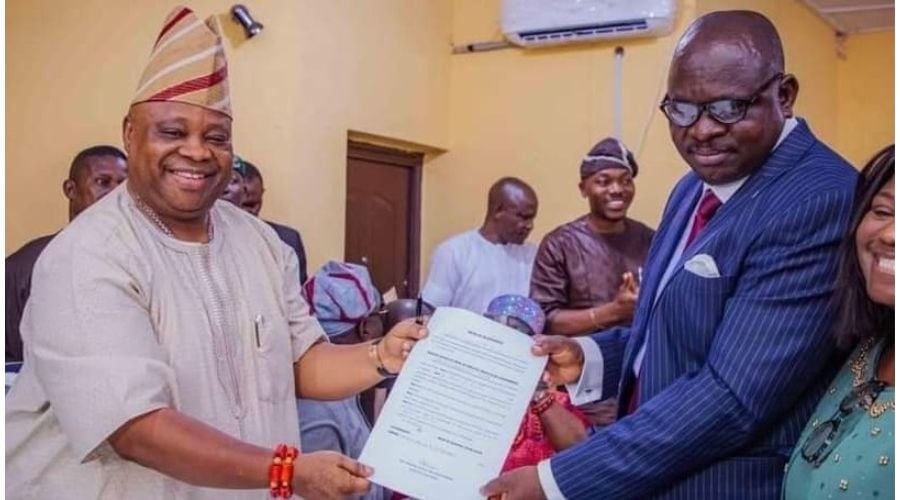 The Osun State Governor, Ademola Adeleke, has promised a new lease of life for workers in the state.

This is as he reiterated his administration's commitment to ensure an improved welfare for civil servants in the state.

Governor Adeleke made this on Tuesday at the swearing-in ceremony of the newly appointed Head of Service, Samuel Ayanleye Aina.

Adeleke who assured the workers of better days under him promised to govern Osun with the fear of God and ensure that no one is denied of their entitled benefits.

He called on workers in the state to be his administration's partner in taking the state to a greater height.

"You are going to have it good under me. You have to be a bit patient with this administration to get things in order."

The Governor who expressed optimism in the workers giving the new Head of Service the necessary support admonished civil servants to compliment the administration in its goal to transform Osun state.

"You will all agree that I made a fantastic choice. From what I can see, from how enthusiastic you are, I am sure you will all cooperate with him," he noted.

"There is time for everything, and when it is time for work, you should all face your work.

Governor Adeleke noted that payment of salary for workers in the state had already commenced, adding that he will not disappoint the workers and people of the state.

"All MDAs have complied with my directive to submit their salary schedules and I have just signed the instruction for the immediate payment of salaries.

"Workers are to start receiving their salaries. I know you love me and I love you too."

In his brief speech, the new Head of Service, Samuel Ayanleye Aina, said the service under him will ensure professionalism and ethics that defines their work, assuring workers to promote their interests.

He pledged the cooperation of the state's workforce to the Adeleke administration, saying the civil service as an important institution will work with the government to deliver benefits for Osun people.