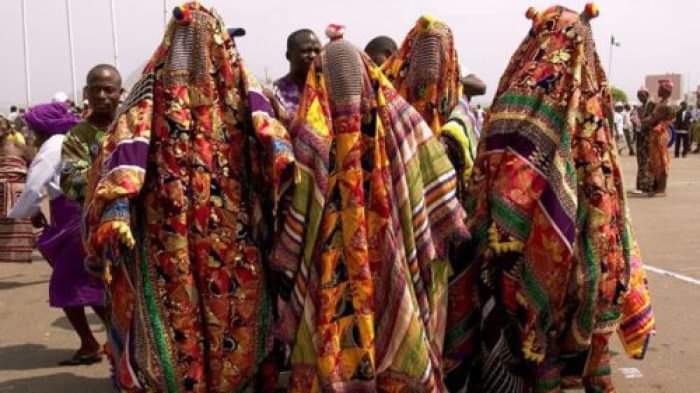 Residents of Ikirun in Ifelodun Local Government Area of Osun State, have raised an alarm over the planned outing of a fearful warrior masquerade, Labikolo, to promote a particular candidate in the ongoing Akinrun of Ikirun selection process.

It was, however, gathered that one of the contestants from the Obara Ruling House allegedly conspired with the traditional chiefs (Iwaramefa) to sponsor one of the most dreaded Masquerades “Labikolo Masquerade” to stage a show of parade across the nooks and crannies of Ikirun on Tuesday.

The motives behind the planned outing of the masquerade, according to sources was to promote the said candidate and preach the gospel of the candidate to residents of the town and the state government.

The kingmakers (Iwaramefa) is headed by the Eesa of the town. Labikolo Masquerade (warrior masquerade) is described by the residents, as the most powerful/dreaded Masquerade in the ancient town of Ikirun.

Expressing his fear in an interview with CityMirrorNews, a resident of the town, who is very close to one of the kingmakers, called on the state government and security agents to prevail on the people alleged to be behind the planned outing of the fearful masquerade saying there was no way the masquerade would be out without leading to the breakdown of the law and order.

“As I am talking to you, there is palpable tension in our town following the planned outing of the Labikolo masquerade tomorrow.

“The dreadful masquerade is being sponsored by a candidate from Obaara ruling house. We have it on good authority that he is conspiring with Iwaramefa led by the Eesa.

“We are calling on the governor, who is known for peace to urgently prevail on the matter, and ensure they avert anything that can ignite tension in the state and Ikirun in particular.

“Any attempt to fuel security tension under any guise that would threaten the peaceful coexistence among our people should be urgently averted especially now that the issue of Akirun Kingship tussle is still in the fore.

“There is no way the labikolo masquerade will be out that there won’t be a crisis because the people of the town especially the royal houses are aware of the motive behind the parade of the masquerade.

“They knew the person who is allegedly sponsoring the show of parade and this might trigger violence.”

The ancient town of Ikirun has been in the spotlight due to the intrigues and litigations over who becomes the next Akinrun after the demise of the last Akinrun, Oba Abdul-Rauf Olawale Olayiwola, Adedeji II.

The demise of the last Akirun on February 3, 2021, made the Akinrun stool vacant and moves to fill the vacant stool had been characterised by divisions and litigations.