Oyo Jailbreak: You Have No Power To Install CCTV At Abolongo Prison, Aregbesola Tells Makinde 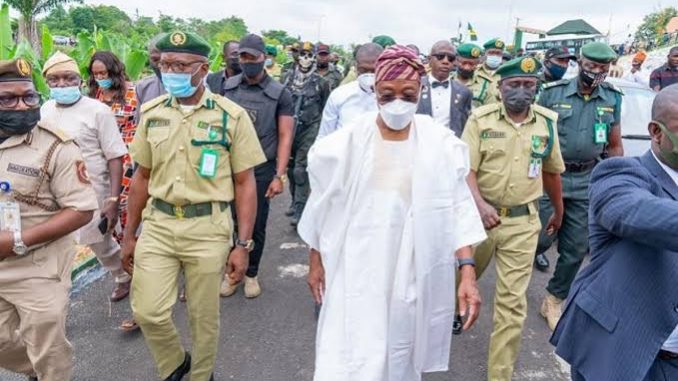 The Minister of Interior, Ogbeni Rauf Aregbesola, on Wednesday advised Governor ‘Seyi Makinde of Oyo State to jettison the idea of installing security cameras in Abolongo prison, just as the governor disclosed the aftermath of the attack on the custodial centre.

Aregbesola’s reaction, came on the heels of the visit of the governor to the custodial centre, to assess its level of damage, following the attack by gunmen on the prison located in Oyo town that led to the escape of not lesser than five hundred inmates.

Makinde had promised that his government would take immediate steps to protect the facility.

The governor, while speaking after an inspection of the attacked centre during the weekend, said that he has ordered that the main road leading to the facility be immediately graded.

He had also promised to install security cameras in the facility and link same with the security situation room in the state.

Reacting in an interview by an Ibadan-based private radio station monitored by Vanguard on Wednesday, Aregbesola’s media adviser, Sola Fasure, said that: “With due regard to Governor Makinde, I am not sure if the governor has such power that something of such nature should be done in a correctional facility.”

“It would be taken as an advisory opinion. In the spirit of the moment, everybody is so concerned as some statement would be made but not necessarily because they are the right one to be made.”

“There is an ongoing upgrade programme of all correctional facilities in the country.

“It is unfortunate it has not got to Abolongo before the incident happened. As you are aware, more per cent of all inmates in correctional facility are awaiting trial. That really creates problem for accommodation.”

“So the federal government is building a 3000-capacity facility in the 6 geo-political zones.

Two are almost ready-the ones in Abuja and Kano. Each facility will have its own court. So the problem of taking suspects to court will be sorted.”

“But what we need more than anything else is for state government, because 99 per cent of most offenders are state offenders. They are the one awaiting trials and occupying most of the spaces.”

“The federal government had proposed at a time that they should build holding centres that the NCS will help them staff and manage.

“And then to accelerate the wheel of justice so that justice will be quickly dispensed. So that we don’t have awaiting inmates facing trial in custody for long.”

“The state government can help tremendously along this line, building holding centres and accelerating the wheel of justice.

“The lawyers use adjournment to frustrate justices. The state government can actually do a review and eliminate adjournment so that justice will be quickly delivered.”

“The upgrade of the facility is ongoing and it will get to every facility in the country where modern facility will be installed.

“So what we need, more than anything, is decongestion, especially of the awaiting trial inmates which fall within jurisdiction of state government.”

“If the state government wants to help, no problem. At least, every assistance would be appreciated. I am just making clarification. You can’t give what you don’t have. You can’t direct another agency on what to do. That is what I am trying to say.”

“The issue of the upgrade of facility is squarely within the jurisdiction of the ministry of interior and the NCS. State government do not have holding centres of correctional facility.”

“But like I said the other time, if the state governments want to assist, they will make their intention known to the appropriate authorities. And the help will be greatly appreciated,” he said.