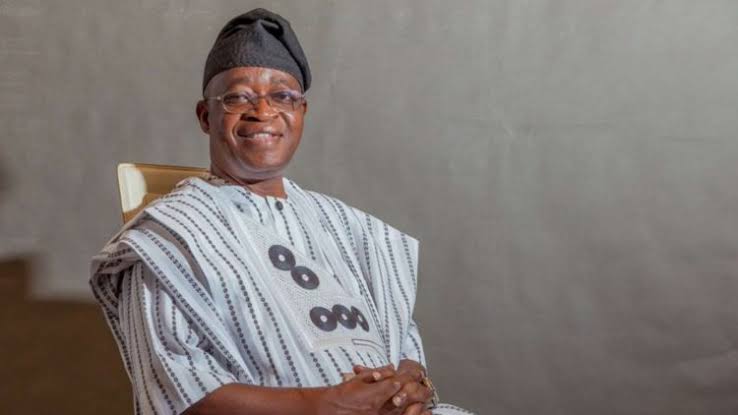 An Osun businessman and member of the Peoples Democratic Party (PDP), Tiamiyu Olamide, has stated that the defence of the Osun State Governor, Adegboyega Oyetola with regard to the Pandora papers linking him to the purchase of a mansion in London is watery.

Olamide also said that he based his argument on the fact that the statement which was released by Oyetola's Chief Press Secretary, Ismail Omipidan can not be taken serious because it can be denied since it was not signed.

A report has risen from a popular online newspaper which revealed that the Osun State Governor had purchased a property in London, United Kingdom through Aranda Overseas Corporation, a company which belonged to him and one other man called Eludoyin.

The PDP member stated that when the news broke, he initially deliberated because he was of the opinion that the defence of the governor will go a long way to expose his involvement in the transaction.

He added that the revelation contained in Omipidan's that the governor had resigned from the company in 2011 and does not have any link with Mr Aluko does not correlate.

In his words, ”The fact remains that Mr. Gboyega does not necessarily need to know Mr. Aluko before he can purchase the property. His lawyer and the lawyer of the owner can sort out the transaction. What about the involvement of his children as mentioned in the report? Ismail didn't also mention that, is that a mistake or a subtle way of not hanging once boss.

"However, the claim that he has resigned is not tenable because he can resign today and backdate it been a private company. The issue is why didn’t he file in or register the change of ownership and director then?

"The Premium Times reporter would obviously have checked the Company Registry in the UK before he can emphasise that there is no report that suggests that he resigned.

"Why didn't Omipidan mention a thing about the Code of Conduct Bureau (CCB). Why didn’t he talk about his boss asset declaration or breach? Of course, Ismail is being careful not to worsen his boss case before CCB.

"It won't be a fallacy to say that Oyetola's uncle who stayed in the house for weeks will do so not for free but in a rent agreement with which the payment will definitely be by Lagos State government."

He observed that from the statement put forward by the governor's media aide, it could be deduced that the property belonged to Oyetola because there was nowhere the allegation was denied.

Olamide added that it was only mentioned that Governor Oyetola had resigned from the company long ago and also there are other questions begging for response which Oyetola will have to answer before the CCB and Economic and Financial Crimes Commission (EFCC).

"Gboyega Oyetola has a date with CCB and EFCC at the expiration of his tenure next year", he concluded.

The investigation noted that the Osun State Governor; Adegboyega Oyetola, a relative of Bola Ahmed Tinubu, national leader of the All Progressives Congress (APC) may have sabotaged his own country by buying the exotic property as Nigeria made to seize it.

The medium had gone ahead to explain that the mansion in question was used by Bola Ahmed Tinubu, the national leader of the All Progressives Congress (APC) and it was there that President Muhammadu Buhari was hosted when he paid the former a visit in the United Kingdom.

During the visit, several pictures were taken and these scenario was repeated when other notable Nigerian political went in similar visitation.

According to PREMIUM TIMES, “But what most Nigerians did not know was that the property at which the duo met was linked to one of the biggest corruption scandals in the country since Mr Buhari became president in 2015.

“A PREMIUM TIMES investigation has now revealed that the mansion where Mr Tinubu welcomed President Buhari is not only embroiled in a multi-billion fraud scandal, the Buhari government had actually secured a freezing order on the property from a Federal High Court before the previous owner, who is now an international fugitive, sold it at a huge discount to an offshore company owned by the governor of Osun State, Gboyega Oyetola, a known proxy and a relative of Mr Tinubu.

“This revelation emerged as part of the ongoing global Pandora Papers reporting project, led by the International Consortium of Investigative Journalists (ICIJ) and in which PREMIUM TIMES is a key participant.

“The project involved 600 journalists from 150 news organisations around the world sorting and analysing a trove of almost 12 million confidential files, tracking down and interviewing sources, and adding context using public records and documents.

“The leaked files were retrieved from some offshore services firms around the world that set up shell companies and other offshore entities for clients, many of them influential politicians, businesspersons, and criminals seeking to conceal their financial dealings.”