PDP, APC: Battle For 2023 And The Crisis Within 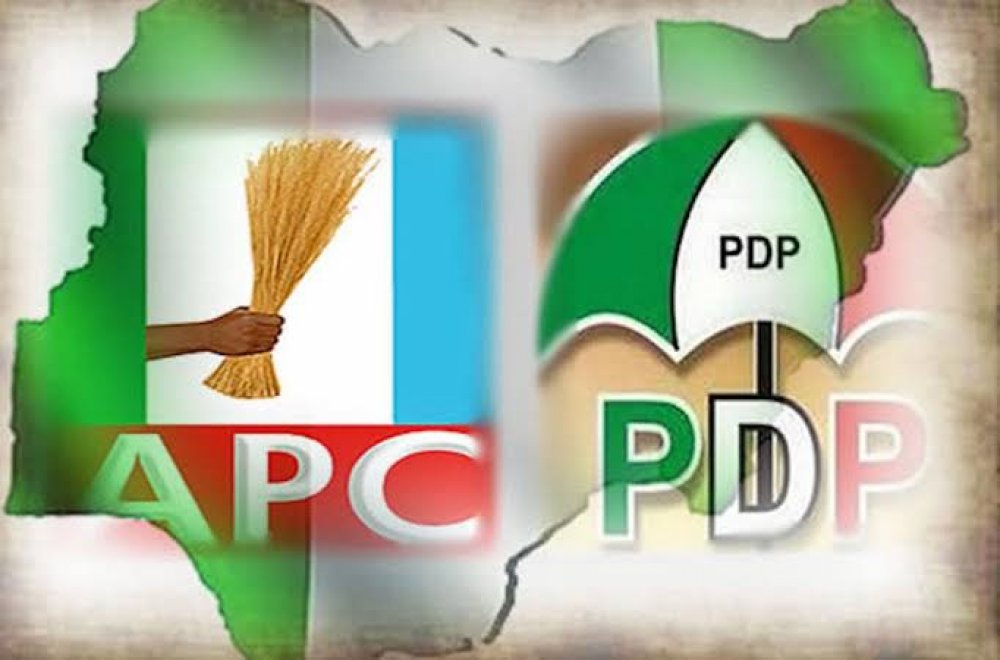 The Nigeria political system is one that is characterized by common traits in its political parties. It has become a normal trait for political parties to have internal crises. These crises usually take effect when elections are due.

The crises are anticipated considering the manner in which the parties were formed. The formation of political parties in Nigeria has always been characterized by defections from different camps.

In view of the recent crisis in the opposition Peoples Democratic Party (PDP) and the ruling All Progressives Congress (APC), let us take a look at the formation of the parties and the looming crisis.

How the People's Democratic Party (PDP) Was Formed

Transitioning from the military regime of the former president of Nigeria, the late Gen. Sani Abacha in 1998, the People's Democratic Party (PDP) came into existence. The party came into being with the coming together of several members of different groups and organisations. Following the death of Abacha in June 1998, the government announced that democratic elections will be held to end 16 years of military rule in the country.

In this light, the PDP was formed with a former Vice President, Alex Ekueme being its first chairman; and Jerry Gana - the first party's secretary. The party gained so much popularity in the country with its members cutting across all facets of the country.

In 1999, the party won the general elections with majority legislative seats, while Chief Olusegun Obasanjo became the first democratically elected president in the country after a long time. The party maintained its powers from 2003 through 2007 and 2011 respectively.

With all the monopoly of the political playing ground of the country and boasting of practising democracy, the PDP failed to internally conform with the etiquettes of democracy. Considering the party's leadership stating when, who and how everything should happen in the party, a sense of authoritarianism through coercion was perceived.

The hegemonic control gave rise to the crisis within the party. Some aggrieved members felt that others were favoured more and factions began to be formed. Party leadership became connected to the leadership of the country. Hence, if the president and the party leadership are at loggerheads, the party leadership suffers as it has always been answerable to the Commander-In-Chief.

Following the creation of the All Progressives Congress (APC), the PDP had suffered a lot from defections and lost seats at the chambers. Recall that in 2013, some governors formed a new party - 'New PDP' owing to expressing displeasure over the leadership of the party. On August 31, 2013, a former Acting National Chairman of the PDP, Abubakar Baraje announced the creation of the 'New PDP' at a press conference in Abuja. Baraje said their purpose was to salvage the party from collapse by the then Chairman, Bamanga Tukur.

In his statement, he said, "We address you today as leaders of the PDP, who are worried by the increasing repression, restrictions of freedom of association, arbitrary suspension of members and other such violations of democratic principles by a faction of our party led by Tukur."

In 2014, 11 senators of the PDP defected to APC, citing the same reason of factionalisation as the previous year. During the defection, Bukola Saraki of Kwara State, Danjuma Goje of Gombe State, Mohammed Ali Ndume of Borno State, Magnus Abe and Wilson Ake of Rivers State, and Abdullahi Adamu of Nasarawa state were among the decampees. In the same year, Aminu Waziri Tambuwal also defected with 37 members to APC. In the turn of events, PDP lost its re-election bid to the All Progressives Congress (APC) in 2015.

How The All Progressives Congress (APC) was Formed

"Where there is unity, there is always victory." - Publilius Syrus

Following intimidations by the then ruling political party - PDP, three biggest opposition parties united to form the APC. On 6th February 2013, the Action Congress of Nigeria (ACN), Congress for Progressive Change (CPC), and the All Nigeria People's Party (ANPP) united, giving birth to the All Progressives Congress (APC). The merger brought President Muhammadu Buhari to power for the second time with his military regime being the first.

On 31st July 2013, the Independent National Electoral Commission (INEC) issued approval for the APC to become a political party. Following the merger, defection hit the then ruling People's Democratic Party (PDP) with its members decamping to APC. Sequel to the defections from other parties to the APC, the party gained the majority causing the relative collapse of the PDP, especially in the North.

Internal Crisis of the All Progressives Congress (APC)

Late American Professional Golfer - Tommy Bolt once said that "There is no better game in the world when you are in good company and no worse game when you are in bad company."

You can't bring your friends and enemies together and expect flawless growth. The APC began to witness internal crises ahead of the 2019 general elections. Members of the 'New PDP' that defected to the APC separated again to form another faction - the 'Reformed APC' (R-APC). The faction made the opposition PDP gain its majority position in the Senate.

The R-APC in a Press Conference on the 4th of July, 2018 in Abuja briefed journalists. One of the leaders of the faction, Buba Galadima said, "We are sad to report that after more than three years of governance, our hopes have been destroyed, our expectations completely dashed.

"The APC has run a rudderless, inept and incompetent government that has failed to deliver good governance to the Nigerian people. It has rather imposed dictatorship, impunity, abuse of power, complete abdication of constitutional and statutory responsibilities, infidelity to the rule of law and constitutionalism."

The statement further read that, "The APC government has been a monumental disaster, even worse than the government it replaced. The political party that was a vehicle for enthroning the government was rendered powerless by manipulations and complete lack of due process in its operations." However, crises have always been present right from the inception of the APC.

The Present: Uche Secondus, Mai Mala Buni And The Crisis Within

In preparation for the 2023 General elections, crises within the two major political parties are developing high momentum. All crises are centred on the leadership of both parties perhaps to bring an end to the internal problems. But then, problems never cease to come.

The main opposition party - the Peoples Democratic Party (PDP), is facing a major blow to its national leadership. Some senior members of the party have mounted pressure on its leader, Uche Secondus to step down or be removed for lack of satisfaction in his leadership. The party governors held a meeting last week Monday concerning the crisis, but no comment was made. However, the governor of Sokoto State, Aminu Waziri Tambuwal, who is also the chairman of the party's board of governors, told BBC that they had not yet reached a stage where they would announce their conclusion from the meeting.

Following the loss of governors of Ebonyi, Cross River, and Zamfara states to APC, the PDP caucus accused Secondus of having "No clear roadmap, blueprint or policy programme for the PDP." Adding that, he was more "Preoccupied with holding onto his position rather than preparing for next elections."

Some see this as a major signal that there is still a long way to go in the party. The PDP is also seen as embroiled in a leadership crisis over the 2023 presidential election, especially in the region where its candidate is due to appear. Recall that,The party ruled Nigeria for 16 years before being defeated by the APC in 2015.

The ruling All Progressives Congress (APC) is also going through its rough days. The APC governors had voted in favor of the party's interim national leadership, led by Yobe State Governor, Mai Mala Buni. However, the legitimacy of his presidency has been the subject of much controversy, with some factions demanding his resignation, saying his presidency is illegal, which could hurt the party in the next general election.

The governors on the other end, however, said they did not see a problem coming because the law did not bar Buni from leading the party at the national level. Supporting that, the governor of Kebbi state, Abubakar Atiku Bagudu said that they had heard more from legal experts on a Supreme Court ruling that the state governor was party leader.

It was for this reason that they agreed to endorse Mai Mala Buni's interim presidency. However, analysts say it is unclear whether the move by APC governors will end the party's leadership crisis. Some people think the action can provoke some party members who are dissatisfied with Mai Mala Buni's leadership. It was such an internal dispute that led former party leaders Adams Oshiomole and John Oyegun to lose their seats.

With the ongoing crises in both parties and the 2023 elections by the corner, it is only a matter of time to ascertain whether it will affect how the APC and PDP engage themselves in the elections.