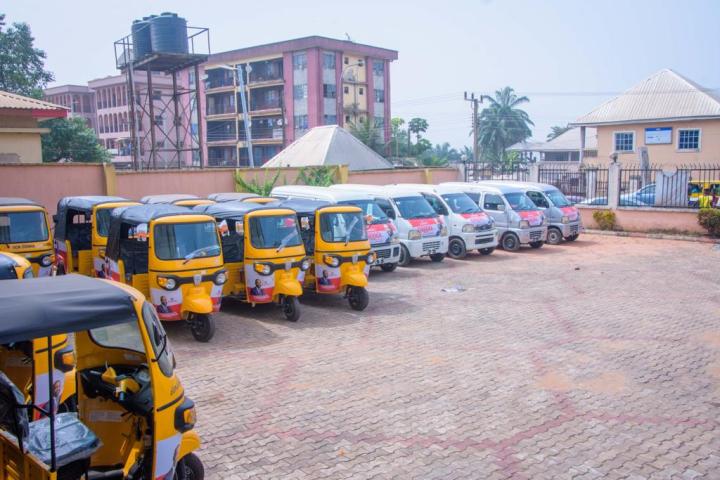 Some members of the People’s Democratic Party (PDP) in Idemili North and Idemili South Federal Constituency of Anambra State have been rewarded for their loyalty to the party following its success in the 2019 National Assembly Election.

Obinna Chidoka, Member Representing Idemili North and Idemili South Federal Constituency on December 11, 2021 distributed several items including vehicles, tricycles, other empowerment items and bags of rice worth millions of Naira to the PDP faithful including those in his campaign team and Polling Agents during the 2019 election.

Handing over the items to beneficiaries in Obosi, Idemili North Local Government Area on Saturday, December 11, 2021, Honourable Chidoka said that no fewer than 400 beneficiaries had demonstrated strong faith in the party and that he was keeping his word to them.

The lawmaker who recalled with pain the memories of the two men who were shot to death during the election, and another faithful supporter who was shot dead shortly after he was declared winner at the Court of Appeal on 30th of October, 2019. Hon. Chidoka gave brand new tricycle to each of their widows Mrs. Kosiso Akujimma and Mrs. Chinyere Mozie respectively.

Honourable Chidoka, who was visibly somber, commended the tenacity of PDP faithful whom he said stood their grounds in defense of his mandate which he later reclaimed in Court.

He condemned the politics of violence and called for the prosecution of culprits and blacklisting of such people from taking part in future election, adding that those responsible for the death of anybody during election should be made to live with the consequences of their actions.

According to him, the February 23 National Assembly election that should have been peaceful became violent when a candidate left his polling unit and ward and came to Obosi to cause chaos which resulted to the loss of the two men which one of the widows is here with us today. In his words – “In spite of this heinous crime, you stood your ground and ensured that we won. I had promised that I will not abandon you. That is why I have called you today. You will go home with items that will make your household economies better.”

Honourable Chidoka had facilitated loans and grants from the Central Bank of Nigeria almost to the tune of N500 million, and has secured employment in various establishments to Ndi Idemili. He noted that his Constituency was populated largely with business people, because there was no land for them to farm, hence the need to empower them with skill and finance.

According to Honourable Chidoka, my mission is that before the end of his tenure, every community will have one development project or more. Already we are working on some roads that have been abandoned.

He has also attracted other projects including roads, borehole, electricity transformers, street lights and classrooms across the 17 communities that he represents promising that more would come in the near future.