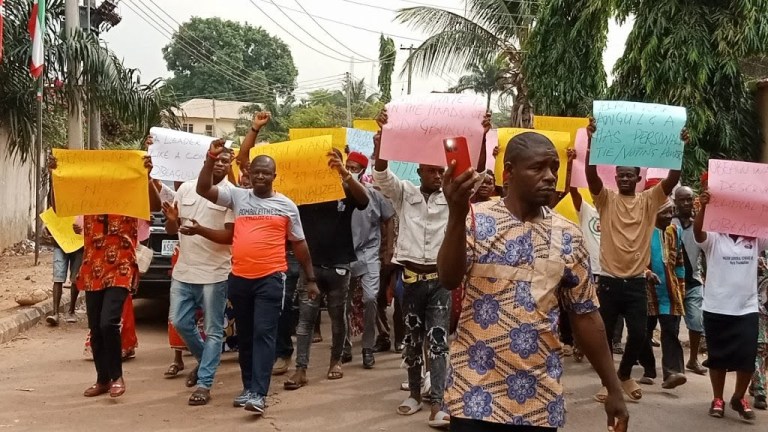 The people of Umualum Enugu-Agu Achi community in Oji-River Local Government Area of Enugu State, on Monday, staged a peaceful protest against indiscriminate police arrests and extortion of villagers for committing no offence.

They also pleaded with Governor Ifeanyi Ugwuanyi to prevail on the former Commissioner in the state, Dr Eric Oluedo, a title-holder who represents the village in Igwe-in-council, to stop using police to harass and intimidate villagers because his wife was a serving judge in the state High Court.

The people carried placards with inscriptions, “Oji-River Police Area Command should stop arresting villagers and extorting N35,000 as bail for committing no crime”; “We Say No to the tyranny of Dr Eric Oluedo”; “Please Gov. Ugwuanyi Rescue Us”; “We are tired of police intimidation and molestation of our people”; among others.

The protesters also marched around the community and Oji-River town.

One of the leaders of the protesting villagers, Sunday Umeh, who was among people arrested and extorted of N35,000 by the police, told journalists that the only crime he committed was that he supported a prayer crusade in the village.

The 65-year-old Umeh said that the prayer crusade was meant to seek the face of God over what he described as the backwardness of the community youths in their businesses and anything they ventured into.

He alleged that police personnel within the area were being used to terrorise them because they wanted to worship God and seek divine solutions to their widely known problems.

Corroborating Umeh’s story, the youth leader of the village, Kingsley Oluedo, confirmed that seven persons had been arrested, while five others had been invited by the police.

Oluedo urged the governor to reign in on Dr Oluedo to stop using the police to harass them for seeking solutions to their village problems. He also urged the State Police Commissioner to prevail on his men from harassing and intimidating the villagers further.

He said, “Our crime is that one man, who feels that he has become a god, doesn’t want prayers in the village except and until he approves it. Again, he has mortgaged the village to the extent that to have a village meeting, permission must be sought and obtained from him. He had threatened a Catholic priest from our village that he would remove him as a priest if he dared to make a call for prayer in the village. This is an aberration.”

Another youth in the village, Chiagoziem Udegbunnam, alleged that youths were being locked up almost on a daily basis on the alleged order of Dr Oluedo.

“We now take refuge in neighbouring communities, as no one is sure of who would be the next to be locked up in the police cell,” Udegbunnam said.

A Catechist at the Assumption Catholic Parish in Enugu-Agu Achi, Victoria Nwankwo, alleged that the only communal palm plantation in the village, which was the only source of revenue generation for the village, had been converted to personal property by Dr Oluedo.

The 70-year-old Nwankwo queried when it had become a crime in Nigeria to pray to God or for villagers to hold a meeting in their town hall they built with their sweat.

“I can authoritatively tell you that this development has further worsened the hardship of the people especially those of us living in the village,” she said.

When contacted, Dr Eric Oluedo, absolved himself of all the allegations; adding that he was a known peacemaker as well as an international chartered mediator and arbitrator of peace.

Oluedo said he had nothing to do with the arrest or using police to harass anybody as that was done by the duly elected executives of the village.

He said that the town hall complex which he was accused of locking, was in agreement with the government, village and security agents to check activities of those who use the building to commit crimes and take hard drugs.

“Also, I have for long hands-off the palm plantation I was being accused of taking and at no time did I personally benefit a kobo from it. You can make inquiries from the present village executives,” he said.

He said that he had before now contributed greatly to the development of his village and impacted greatly on the lives of most of his village members; adding, “These falsehood and unfounded allegations are done to dint my image.”