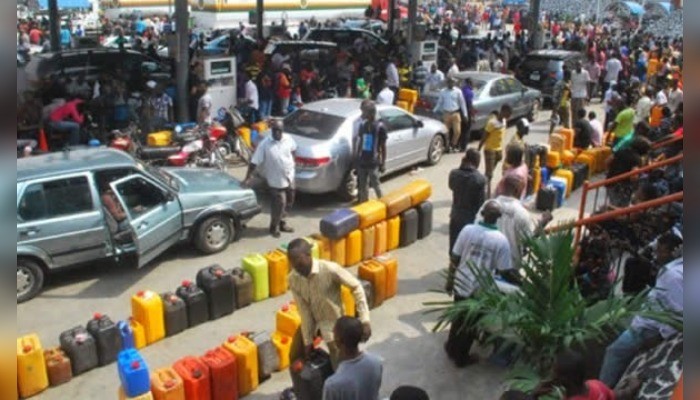 Long queues resurfaced in most of the petrol stations in Abuja yesterday as motorists tried to adapt to the new reality that such scarcity brings.

This happened despite the reassuring guarantees the Nigerian National Petroleum Company Limited had given that it had enough supply to last through the festive period.

Unfortunately, there is still no official statement from the NNPC or any other regulatory agency about what could be responsible for the sudden scarcity.

According to our Abuja correspondent who visited some of the affected filling stations this morning, some stations were under lock and key as motorists weren’t allowed within a meter of the dispenser.

When contacted, it was either that our correspondent was not allowed access to the manager or those willing to talk complained of the absence of the product.

As a result of this supply shortage, black marketers were seen doing everything possible to cash in on the situation.

Our correspondent notified us that one of the few stations that sold fuel at the existing price had a very long queue that scared off any motorists hoping to get fuel there.

Consequently, Azman Oil and Gas Nig Ltd at Wuse was opened, but the petrol attendant said the station had no stock either.

Added to our correspondent's investigation is that of PREMIUM TIMES, whose correspondent complained of a similarly long queue at Emadeb and Mobil filling stations in Jahi, Saddi Kamal, and A.A.Rano in Lugbe. AFDIN.

Similarly, the PREMIUM correspondent complained about the chaotic scene at the NNPC outlets in the Central Business District along Wuse Road, where a huge crowd of motorists struggled to buy petrol.

"As you can see, we still sell at N162 per liter, but all I can tell you is that Monday is usually like this. This is because most fuel stations sell off their product during the weekend and are trying to restock. That’s why you see queues in most filling stations, " the petrol attendant, Mohammed Labaran, said.

Our correspondent noticed that because of the rowdy scene at the Austoma filling station, some motorists decided to patronize black marketeers loitering around the station.

It was gathered that a 5-liter jerry can of PMS sells for as much as NGN1,500.

A car owner, Faruok Ismaila, told our reporter that filling station owners were trying desperately to take advantage of the masses by selling only to black markets.

"These people are just completely wicked. They have this product, but they refuse to sell it to us. I can say that they are in business with the black markets to rip innocent motorists off, "he said.

"NNPC had over 1.7 billion liters of petrol in stock and more of the product is expected to arrive in the country daily over the coming weeks and months.

"It was, therefore, unnecessary to entertain any fear of scarcity of petrol throughout the festive season and beyond.

In a statement in November, the NNPC said it was not aware of any plan by the government to cause an increase in the pump price of petroleum.

It went further to say that the federal government will inform the general public if there's going to be any adjustment to the pump price.