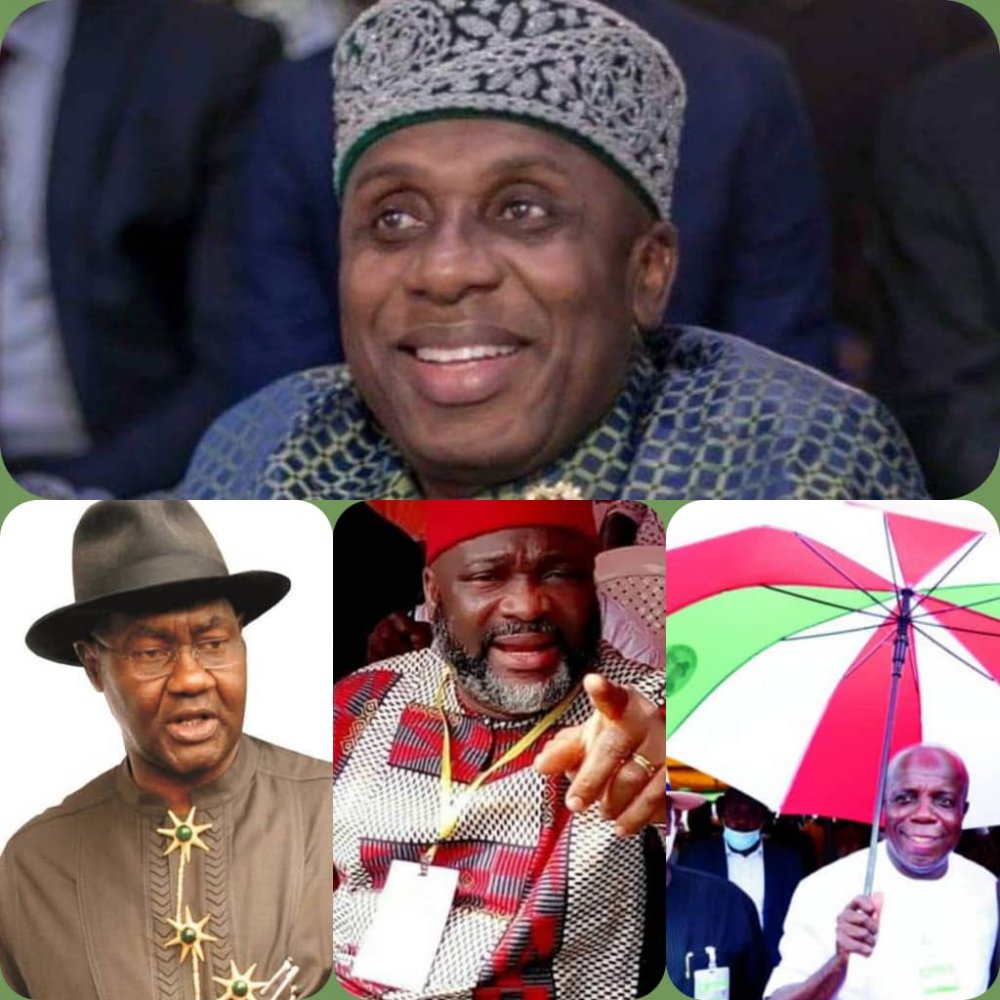 The most injured persons in the defection of Dr. Chidi Lloyd from APC to PDP last weekend seem to be Senator Magnus Abe, Hon Igo Aguma, and their misguided cohorts instead of Rt Hon Chibuike Rotimi Amaechi and his Team. This is because Lloyd’s declarative statement to the entire Rivers people on radio that it was brave and better for him to join the PDP than to stay in the APC and be working with the PDP is a strong bullet to two known major political saboteurs of our dispensation and their confused supporters.

Most persons laugh at others not knowing they are actually laughing at themselves.

It was therefore sordid and embarrassing how Senator Abe and his misguided data boys danced naked in celebration of the sudden defection of Hon. Chidi Julius Lloyd, one of the pillars of democracy in Rivers State, from the All Progressives Congress to the People's Democratic Party.

The unnecessary ceremonial grandeur was so immodest that it raised suspicion and provoked many to ask whether Senator Abe has been returned elected as Rivers Governor even when the 2019 election has long been concluded and consigned to history and 2023 still in the offing.

Reacting to the 'stuff and nonsense,' chieftain of the All Progressives Congress and erstwhile National Publicity Secretary of the defunct New People's Democratic Party, (nPDP), Chief Eze Chukwuemeka Eze, said the pomp and circumstance further exposes the level of hatred Senator Abe and cohorts harbour against the Rivers APC and the South-South leader of the party, Rt. Hon. Chibuike Rotimi Amaechi.

In a statement made available to AllNews on Thursday, the party stalwart deeply regretted the circumstances and contributory factors that informed Dr. Lloyd's decision to exit a political family that raised him to stardom and for which he had made series of sacrifices. According to Dr. Lloyd, "God used Chibuike Amaechi to help my life,"

Eze recalled the role Dr. Lloyd played in saving democracy in 2013 which he described as historical and will remain fresh in the memories of lovers of democracy. His role is etched in the minds of all those who know the depth of damage our nascent democracy and governance would have suffered if he and others had not taken the risky path which turned out to be a defining action.

The party Chief said Rt. Hon. Chibuike Amaechi has invested so much in Dr. Llyoyd especially, his election and subsequent re-elections as member of the Rivers State House Assembly for three consecutive times, as well as his emergence as leader of the state legislature coupled with other interventions Amaechi made to improve him politically and for him to leave at a time when his services are most needed is just unfortunate.

The afore-stated notwithstanding, Eze appealed to critiques not to condemn Dr. Lloyd over his defection because according to him, the former lawmaker only acted to save his head from a governor who shows no mercy when he grabs you under his armpit.

Although Chief Eze threw to the waste bin some of the reasons advanced by Chief Ambrose Nwuzi, Chief Allwell Oneyosh and Dr. Chidi Lloyd who even stated thus, "God used Chibuike Amaechi to help my life," for their defections after benefitting from Amaechi and his political family, he commended them for their boldness in leaving the APC without any insult on either on Amaechi or APC as a political party rather than stay behind to wreck the kind of havoc Senator Magnus Abe and his boys caused and is still causing the party.

The devious acts of Abe prompted Dr. Lloyd, during a Radio Programme monitored in Port Harcourt, to retort thus; "Between myself who took a bold step to return to PDP and those in APC but working with PDP, who should be celebrated?” This declarative statement seems to nail Abe’s political coffin and Amen closing him as a confused politician. It robs him of the last traces of credibility because he has been denying working with Wike to destroy the APC.

Now that one of those who should know has declared it, it is now obvious that Abe cannot be trusted. He is in PDP, he is being rewarded, but he still goes to Lagos and Abuja to pretend to be a factional leader of the APC in Rivers State. Those who believe him there think that if they treat him well, he would close ranks with the other leaders of the APC at home and close the matter.

Sadly enough, they do not know that the agenda is long-running and that all that Abe is doing is to grab from both sides as much as possible knowing that his ambition to be next governor of Rivers State would never come from any of the two parties.

Although Abe had severally admitted being the highest political investment of Rt. Hon. Chibuike Amaechi,  but considering the damage he has done the party, it becomes imperative to appeal to him to follow the bold steps of the trio of Chief Onyesoh, Chief Nwuzi and Dr. Lloyd. It is better for him to formally embrace the PDP, a party he secretly assisted in both 2015 and 2019 general elections and which he has benefitted so much from. He installed some of his men in the State Executive Council and other organs of the PDP.

"Now that Dr. Lloyd and Chief Nwuzi have boldly left APC, I plead with Senator Magnus Abe and his cohorts to adhere to the advice of Dr. Lloyd to join him instead of claiming to be a member of APC and working with the PDP in the decimation of the former".

Similarly, Eze called on the National Working Committee of APC under the leadership of Gov. Mai Mala Buni of Yobe State to do whatever that is necessary to save the Rivers Chapter of the party from Senator Abe and his likes whose current mission in politics is to ensure that the party doesn't exist in the State. The problem is that this seems to be a specific assignment given to Abe and his company by their paymaster. It seems no amount of peace moves or pacification can deter Abe from his assignment because his paymaster may never tolerate such. Many observers know that it is only Amaechi you can freely sabotage the way Abe has acted and get away with it.

Highlighting why it seems that most of the characters that have benefitted so much from Amaechi are deserting him in droves, Eze quoted Dr. Ugo Egbujo who captured the happenings in Rivers State aptly, "In Rivers politics, you can marry a wife for a man, buy him a mat, and put stockfish in his mouth, yet the next day, he will abandon you and join your opponents. In Rivers politics, once the stockfish put in your mouth is finished, you don't wait, you bite the finger that has been feeding you; and make it bleed!" Sadly that is the type of politics being practised by most of these defecting politicians and those claiming to be APC members while working against the party exposing their lack of integrity, principle, and ideological stand.

Eze maintained that with the exit of most of these leaders who feel that Amaechi can no longer sustain their stomach infrastructure which is the type of politics known to them, it is time for their remnants to follow them so that those of remaining can rebuild the party to salvage the sad situation that the state has been thrown into, now regarded as the poverty capital and unemployment hub of Nigeria, going by the recent NBS economic index rating.

Eze maintained that Amaechi will not steal or embezzle Government funds in order to satisfy the unsatisfiable greed of these so-called leaders. Together with other great and principled leaders still remaining in the APC, the members will rebuild the party to what it should be, Eze stated.

Eze reassured the general public that the defections of these spent leaders would not in any way affect the prospects of APC in Rivers State as they will soon see a reinvigorated, virile, and vibrant APC that will usher in a government that will change the fortunes of the people of the state from its present pitiable condition to the State we all crave for.

The best asset the APC and the Amaechi political legacy has at the moment is the nostalgia in the state and the open testimonies by the people who often say if Amaechi was here, this would not happen. Now, the people have opened their eyes and they are seeing. The deceit seems to have fallen off their eyes.