Reuters Accused Of Blackmail By DHQ 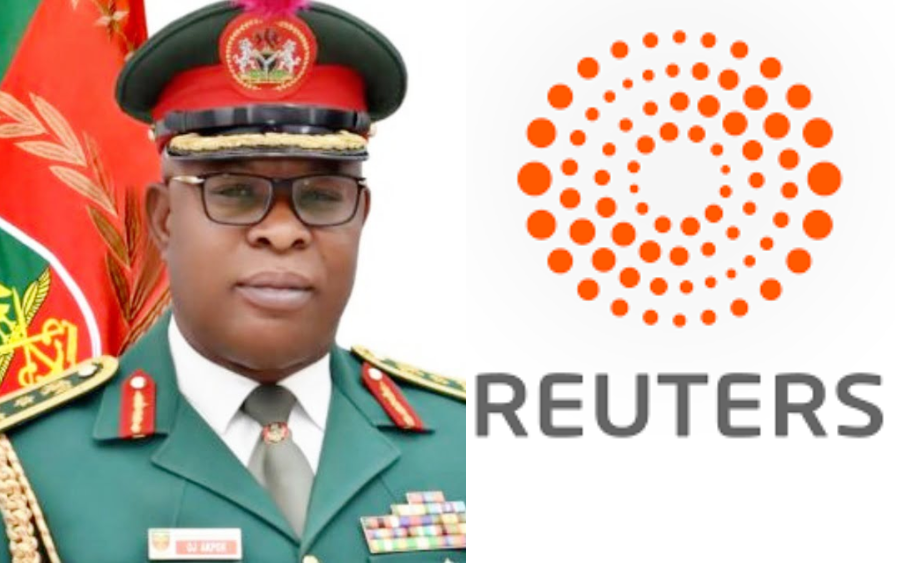 The Defence Headquarters (DHQ), Abuja has accused British news organisation Reuters of trying to blackmail the Nigerian military through what it called "mercenary journalism."

The information was released in a statement on Saturday in Abuja by Maj.-Gen. Jimmy Akpor, Director of Defence Information.

Akpor said the news organisation claimed to be working on a number of articles about alleged military operations in Nigeria during the 13-year conflict between the government and Islamist rebels in the country's North-East.

He noted that Reuters had given the go-ahead to work on fabricated reports that purported to centre on an alleged military programme that involved forcing abortions on women and girls who had been kidnapped and impregnated by Islamist terrorists.

The second, in his opinion, is the military allegedly killing kids as part of counterinsurgency efforts.

The defence official stated that the Reuters story would also claim that the Nigerian military has been conducting a covert, routine, and illegal abortion operation in the nation's North-East since 2013, which has resulted in the termination of at least 12,000 pregnancies among women and girls.

According to him, Reuters had claimed that numerous children had allegedly been shot, poisoned, smothered, or driven over by vehicles during army-led operations.

He continued, saying that among other grave fabrications, the report would claim that soldiers picked out infants and toddlers for execution after saving their mothers and the children from Islamist militants.

Akpor stated that the news source also claimed that the main reason for allegedly performing the abortions was allegedly the fear that because of the blood in their veins, children of Islamist militants would eventually follow in their father's footsteps and take up arms against the Nigerian government and society.

The two-star general responded to these accusations by saying that "wickedness definitely runs in the veins of some people and it certainly runs deep in the veins of the Reuters team that fabricated such evil for interrogation."

“Irrespective of the security challenges we face as a nation, Nigerian peoples and cultures still cherish life.

“Hence, Nigerian military personnel have been raised, bred and further trained to protect lives, even at their own risk especially, when it concerns the lives of children, women and the elderly.

“This much is reflected in Standing Operating Procedures (SOPs), Concepts of Operations, Rules of Engagements (ROEs) and other documents that guide military operations.

“Hence, nowhere has the Nigerian military operated – Congo, Liberia, Sierra Leone, Somalia, Rwanda, Yugoslavia, [Darfur] Sudan, Gambia and Guinea Bissau, amongst others —  that there was any trace or allegation of infanticide.

“The Nigerian military will not, therefore, contemplate such evil of running a systematic and illegal abortion programme anywhere and anytime and surely not on our own soil.

“The Nigerian military will not also deliberately plan to target children during its counterinsurgency operations or other operations, both within and outside Nigeria,” he said.

According to the defence spokesman, the Reuters crew must have been taught and has since adopted the scorched-earth and inhumane practices that colonialists used throughout the colonial era and during the wars for independence in Indo-China, Malaysia, Algeria, and other locations.

The scorched-earth policies of the colonialists, according to Akpor, resulted in the burning of villages and crops as well as the systematic and inhumane killing of children, women, the old, and innocent people.

“It took Reuters 13 solid years to craft an allegation of infanticide against the Nigerian military and the Nigerian nation.

“This shows that a news agency as ‘renowned’ as Reuters is itself complicit for failing in its mandate to draw attention, to inform the public about supposed occurrences that offend not only the laws of armed conflict but also international humanitarian law,” he said.

A total of 82,064 Boko Haram militants and members of their families have surrendered to Operation Hadin Kai troops since July 2021, according to the defence spokesman.

He said the Borno Government created camps for them family by family without having to separate the children from their parents.

“In the same camp are thousands of pregnant women and nursing mothers.

"The children were neither aborted nor yanked from their mothers and killed, as may have been the joy of Reuters.

“Let us now spotlight the rescued Chibok girls who were kidnapped from their school by Boko Haram terrorists in 2014. A total of 11 of the Chibok girls were rescued this year 2022.

"Troops also rescued Kauna Luka with her child and Hanatu Musa with her two children in July 2022.

“The rescued girls were handed over to the Borno State government after their rescue.

"A visit to the Rehabilitation Centre accommodating the Chibok girls on Nov. 29, 2022, revealed that there were two other Chibok girls (with their children) rescued earlier, making the number of Chibok girls in the centre to be 13.

“Other residents in the facility were children who were rescued by troops unaccompanied (by any adult) or who separated from their parents and relatives due to the fog of war.

"The welfare of the Chibok girls with their children and the unaccompanied children is a major priority of the Borno Government.

"UNICEF is assisting the centre in tracing the relatives of the Chibok girls, as well as those of the unaccompanied/separated children to facilitate reintegration with their communities.

“If there was any evil, illegal programme to systematically kill the children of Boko Haram terrorists, then the children that the terrorists begat through the Chibok girls would have been prime targets,” he said.

Akpor said the crucial point to note was the fact that more than 245 UN agencies, International NGOs and local NGOs operating in the Northeast, were active in the IDP camps and in other concentrations of vulnerable people.

According to him, they provide food, medical care and other services in collaboration with the Federal and Borno State Governments but the wickedness of the Reuters team members must have blinded them, shutting them off from the humanitarian realities in the North-East of Nigeria.

“The Reuters condemnable series of stories can only have arisen from a mentality of “media or press-bullying”.

"Reuters is a media company with worldwide reach that sells news to print, electronic and online media outlets.

“The so-called News Editor for Sub-Saharan Africa, Alexandra Zavis, remains in South Africa and concocts evil lies to insult Nigerian peoples and cultures with allegations of infanticide purportedly being sponsored and carried out by the military and civilian leaderships in North-East of Nigeria.

“The Reuters’ series of stories are akin to telling the world that Nigerians still live on top of trees.

“It now seems that the new stock in trade for Reuters is, ‘mining’ and selling lies to demonise Nigerian military, Nigerian institutions and Nigerian leaderships.

“This new vocation of Reuters is worse than illegal arms trade, worse than hard drug trafficking and actually worse than terrorism.

“The so-called Reuters’ News Editor for Sub-Saharan Africa, Alexandra Zavis, should better retrace her steps, before the founder, Paul Julius Reuter, starts to regret the demonic journalism being practised by the journalists that he left behind,” he added.