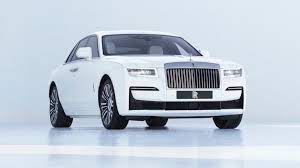 German carmaker Rolls-Royce has revealed that sales of its luxurious brand hit record numbers last year. This was achieved despite the COVID-19 pandemic that continues to affect business strength all over the world.

According to the company’s chief executive, Torsten Muller-Otvo, wealthy individuals were encouraged to buy more Rolls-Royces  cars than ever before because it made them realize how valuable life is and how best to get the best out of life.

Despite COVID-19 cases escalating in 2021 with the delta and omicron variants, the Rolls-Royce car plant situated at Goodwood, West Sussex, booked the highest annual sales in its 117-year history, selling 5,586 vehicles.

Senior executives at the company believe that the growth is connected with a change in the mindset of younger, wealthy individuals who believe that it is in their best interest to splash out as much money as possible to buy the luxury car brand.

Many people witnessed people in their community dying from COVID, and that made them think life can be short and you’d better live now rather than postpone until a later date, said Müller-tvös.

"That has helped Rolls-Royce", he said.

He also attributed the growth in sales to a legislative restriction created as a response to the pandemic to restrict wealthy consumers from spending their money elsewhere.

"It is very much due to COVID that the entire luxury business is booming worldwide," he said.

"People couldn’t travel a lot, they couldn’t invest a lot in luxury services... and there is quite a lot of money accumulated that is spent on luxury goods.

He was shocked because the usual trend is to have demand drop and sales decline, but the reverse was the case as China and the Americas, which are the two biggest markets, each contributed the lion's share of global sales.

He also informed us that the company’s first fully electric car, the Spectre, will be delivered in 2023, ahead of a move to stop producing combustion engines and go fully electric by 2030.

An opportunity for extremely rich individuals to design their own cars will be available soon. This will give them a chance to decide the colour and so many intricate features of how they want their car to be built.

This opportunity will be captured in the "coach-built" service that will allow devotees of the marque to design their own car over four years.

This will allow them to purchase "something money normally can’t buy, but you can get it with us," Müller-tvös said.

Despite the record sales, records could have been even better if not for the administrative bottlenecks created by the Brexit move, as this made it difficult to export their cars.

"Brexit definitely didn’t make our life any easier," he said.

Any impact on the company’s costs will not show up until it reports full accounts later this year.

Some wealthy Nigerians were not left behind, as Afrobeat music star Davido got himself a Rolls-Royce Cullican. Others include DJ Cuppy, Obi Cubana, just to mention a few.