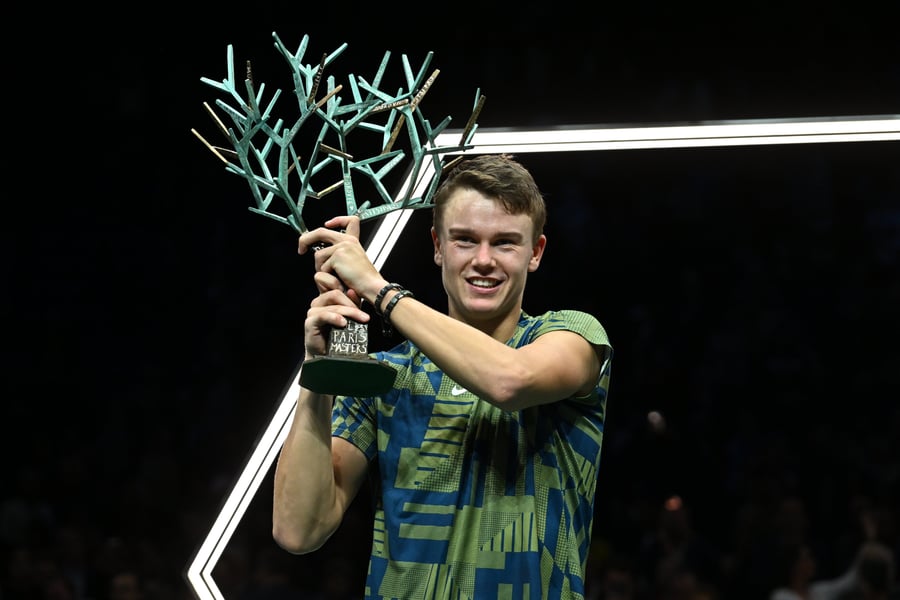 Danish teenager Holger Rune stunned six-time champion Novak Djokovic to clinch his first Masters' title in Paris on Sunday after coming from a set down to win 3-6, 6-3, 7-5.

Rune, 19, became the youngest winner of the Paris tournament since an 18-year-old Boris Becker in 1986 after beating five top-10 players in as many days – the first to do so in the same tournament.

He is the fifth first-time Masters' winner this season and will be the first Danish man to break into the top 10 on Monday.

"It's probably the best feeling of my life, of my whole career," said Rune.

"It's kind of a small dream come true, even though I have bigger dreams."

After winning the title in Stockholm either side of runner-up finishes in Sofia and Basle, Rune began his run to a fourth straight final by saving three match points in the opening round to beat Stan Wawrinka.

He then took down Hubert Hurkacz followed by Andrey Rublev before seeing off Carlos Alcaraz as the world No 1 retired with an injury while trailing by a set in the quarterfinals.

Rune snapped Felix Auger-Aliassime's 16-match winning streak to set up the clash with Djokovic, who had not lost at Bercy since his defeat to Karen Khachanov in 2018 final.

"It was also very important for me to beat Felix and Alcaraz and these guys," said Rune.

Serbia's Djokovic came into Sunday's final having won 21 of 22 matches since the start of Wimbledon, which he won for the seventh time in July to match Pete Sampras.

"For somebody who is so young to show this composure and maturity in a big match like this is very impressive. He's had a week of his life," said Djokovic.

He broke for a 3-1 lead as Rune served back-to-back double faults in the biggest final of his career to date.

Djokovic comfortably held out to pocket the opening set and looked to have Rune on the ropes when he surged 40-0 ahead on his opponent's serve in the first game of the second set.