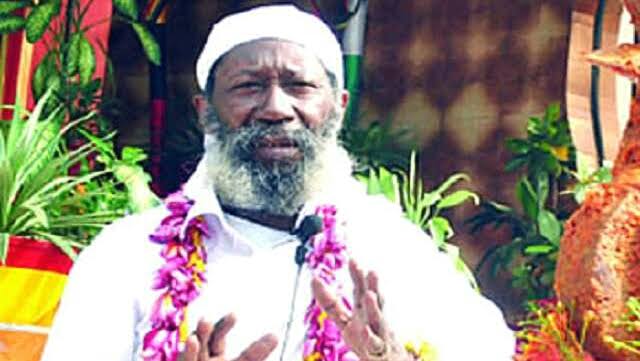 Founder of One Love Family, Satguru Maharaj Ji has dissociated himself from a faceless group, Gurumaragy Brotherhood Occult.

This is as he emphasized that his activism as the living perfect master has no affiliation with the association.

Satguru Maharaj Ji, in a press release through Ojo Mogbadewa, the spokesperson of the One Love Family called on the public to disregard any publication or advertisement regarding money rituals being associated with him adding that it is baseless and intended to tarnish his good image.

"The so-called Gurumaragy Brotherhood Occult used the photograph of the living Perfect Master, Satguru Maharaj Ji to attract cheap popularity and credibility to themselves. The general public is hereby warned to disregard any publication/advertisement by this illegal organization as this is a fight and the last fight by the enemies of Africa.

"The general public is hereby informed that The Living Perfect Master, Satguru Maharaj Ji is the Genius of Divinity, The Avatar, The Mahdi, The Godman and Godfather of our time. The Supreme Primordial Kinetic vibration sustains the universe and the repository of life - the source of all good things in life and therefore cannot be involved in money rituals.

"This is an opportunity for all those fraudsters and mischief-makers who wish to use the Holy Name Maharaj Ji to defraud the innocent ones to refrain from such activities, otherwise they will pay for it because of disrespect to the Holy Spirit is unpardonable.

"Recall that Satguru Maharaj Ji started his mission to save the world from Nigeria on July 17, 1980, and ever since then, Maharaj Ji has been able to establish Asrams (Alajobi homes) all over the world in a mission to salvage the human race.

"On May 29, 1993, Satguru Maharaj Ji declared Nigeria the New Holy Land of the Universe to dislodge the powers of darkness that have used Nigeria as their power base to fight the light, maim and kill children of light who are about to establish the new Golden Age of Life. This is because Nigeria is the new home of the Creator, host country housing the Living Perfect Master.

"On August 16, 1993, The Father of Creation declared Nigeria "A No War Zone" at the heat of embers of war being drum by former Minister of Information, Uche Chukwumerije, the spokesman of the then military president, Ibrahim Badamosi Babangida after annulling the most credible presidential election in Nigeria political history believed to have been won by Chief M.K.O Abiola.

"Satguru Maharaj Ji said he would turn all the arms and ammunition they bought for war into bread and be sharing it to all Nigerians and He has been doing so till date. The "No War in Nigeria Declaration" standstill today despite all skirmishes recorded here and there.

"The highly acclaimed publisher of Ovation Magazine, Chief Dele Momodu, as the Editor of the defunct Classique Magazine, in an interview with Satguru Maharaj Ji 31 years ago, came out with a front-page bold headline "The Christ of Our Time" - This bold and sincere proclamation eventually shot him to limelight ever since.

"Unlike Dele Momodu, the publisher of Classique Magazine, May Ellen Ezekiel used her position as a publisher to write an article against The Light, Satguru Maharaj Ji, which led to members of The One Love Family staging a protest to the Classique Magazine complex in Ikeja, but the woman rebuffed every entreaty to make her see reasons and she eventually paid for it.

"May Ellen Ezekiel further used her position as publisher to lure one of her husband's to act a movie depicting Satguru Maharaj Ji as a bishop/pastor/babalawo. These are all enemies of the Black Race, the Black liberation and Renaissance," the statement said.

The release recalled that Satguru Maharaj Ji has a hand in the political elections of almost all if not all the world leaders, like Bill Clinton, Barrack Obama, Chief Olusegun Obasanjo, Goodluck Ebele Jonathan, Donald Trump, and Emmanuel Macron.

On the home front, it stated that Satguru Maharaj Ji's grace touched the following to become governors in their respective states, Alao Akala, Nyesom Wike, Chimaroke Nnamani, Lam Adesina, Orji Uzor Kalu, and a host of others.

"Satguru Maharaj Ji was detained by the Nigerian Army for entering the Military Cantonment against the order of IBB but the World Teacher being law-abiding, obedient, and honest to the laws of the land was able to produce a paid receipt for the use of the hall and was released promptly," it concluded.