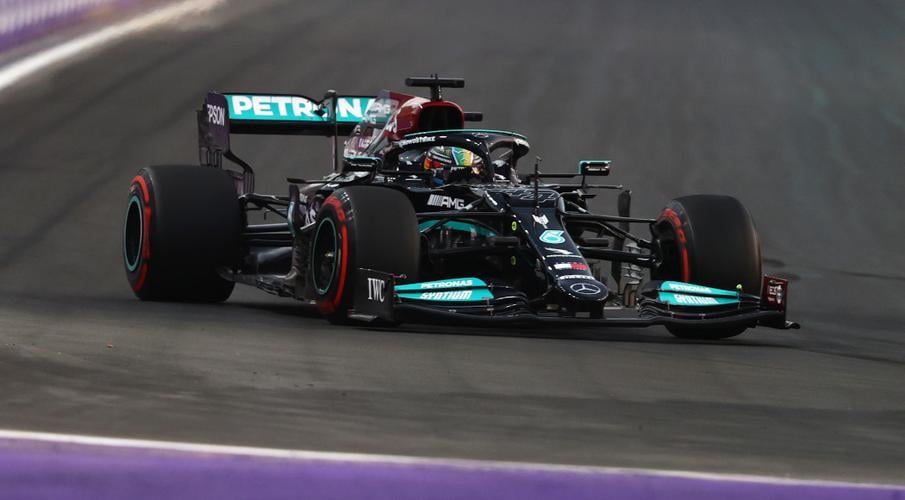 Lewis Hamilton set the pace ahead of teammate Valtteri Bottas as they completed a one-two for Mercedes on the opening day of practice for the inaugural Saudi Arabian Grand Prix on Friday, while Ferrari's Charles Leclerc walked away from a heavy crash.

The 36-year-old Briton, who pipped 24-year-old championship-leading Red Bull rival Max Verstappen in the opening hour of running, went even quicker at night under the floodlights, lowering his benchmark to one minute 29.018 seconds.

Bottas was 0.061 seconds behind while Dutchman Verstappen dropped behind AlphaTauri's Pierre Gasly to fourth, 0.195 seconds slower than his Mercedes rival.

The top three were separated by less than 0.1 seconds.

The opening hour went off without incident but the pitfalls of the Jeddah street track, its flat-out blasts hemmed in by walls with no margin for error, were highlighted during the second session.

Leclerc lost control of his Ferrari at high speed on the approach to the fast Turn 22-23 chicane crashing backwards into the barriers.

"Sorry guys," said the Monegasque to his team, clearly winded, over the radio before uttering an expletive and confirming he was okay.

The incident brought a halt to the session five minutes before it was officially scheduled to end.

Several drivers, including seven-times world champion Hamilton, also got away with near misses as they were nearly caught out by slower moving cars while on their flying laps.

Spaniard Fernando Alonso, on the podium at the last race in Qatar, was fifth for Alpine ahead of team mate Esteban Ocon.

Carlos Sainz was seventh for Ferrari ahead of AlphaTauri's Japanese rookie Yuki Tsunoda.

Verstappen's team mate Sergio Perez was ninth, while Leclerc rounded out the top 10 despite his crash.

The Saudi Arabian Grand Prix is the first of only two races left on this year's Formula One calendar, with the hard-fought battle of the generations between Hamilton and Verstappen racing towards its conclusion.

Verstappen leads Hamilton by eight points in the overall standings and has his first shot at wrapping up a maiden title with a race to spare this weekend.

Hamilton, who needs to finish at least fifth to keep the battle alive into next week's Abu Dhabi finale, is gunning for a third win in a row to force a last-race showdown in his quest for an unprecedented eighth world title.

Mercedes could also wrap up a record eighth constructors' title on Sunday if they score 40 points more than Red Bull.

Teams carried a tribute on their cars to Frank Williams, co-founder of the Williams team, who died aged 79 on Sunday.

The team, among the sport's most successful outfits which was sold to new owners last year but continues to race under the Williams name, carried the words: "I feel the need, the need for speed," on the halo cockpit protection device.