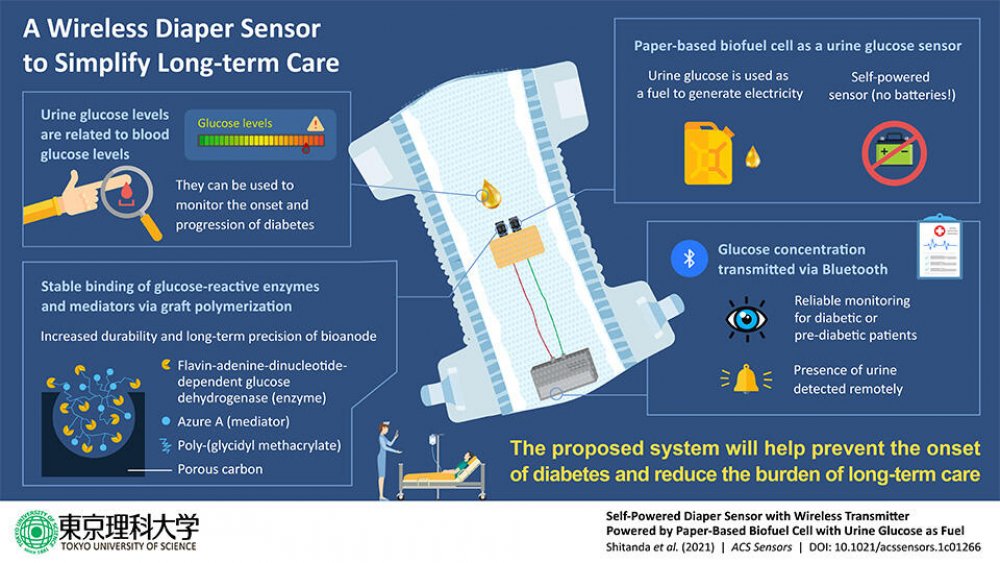 Scientists from the Tokyo University of science have announced that it has created a new sensor designed to be fitted into diapers to generate the electricity it needs to operate directly from urine using a biofuel cell.

The University disclosed that the sensor is completely self-powered and needs no battery to get the electricity to operate because it uses urine as fuel. Usually, monitoring blood glucose levels involves needles and drawing drops of blood to test directly using expensive test strips and glucometers.

The advent of a self-power biosensor that can be placed into a diaper is seen as a significant advance for medical care because they are usable by both skilled medical staff and people without medical training to remotely monitor diabetes, which is a common disease.

A sensor of this type is considered extremely important in monitoring blood sugar and avoid blood draw for the purpose of diabetic care.

Scientists say the sensor could be used to monitor both diabetics or those with pre-diabetic conditions. While diapers are most commonly associated with babies, some adult diabetics cannot get out of bed due to injury or age and wear diapers.

According to the university, the sensor uses electrochemistry to generate electricity from urine. Researchers developed a paper-based biofuel cell that leverages a reduction-oxidation reaction to reduce electrical power based on glucose in the patient’s urine. A special electrode was created to serves as the base conductive material for the wearable sensor using graft polymerisation using carbon to embed glucose-reactive enzymes and mediator molecules.

As of the time of this report, there is no indication at this time when the sensor might be available for commercial use. The electricity generated by the biosensor powers a Bluetooth Low Energy transmitter sending the measured concentration of glucose wirelessly to a smartphone. Researchers note it is very fast able to gather data for reading in about a second.