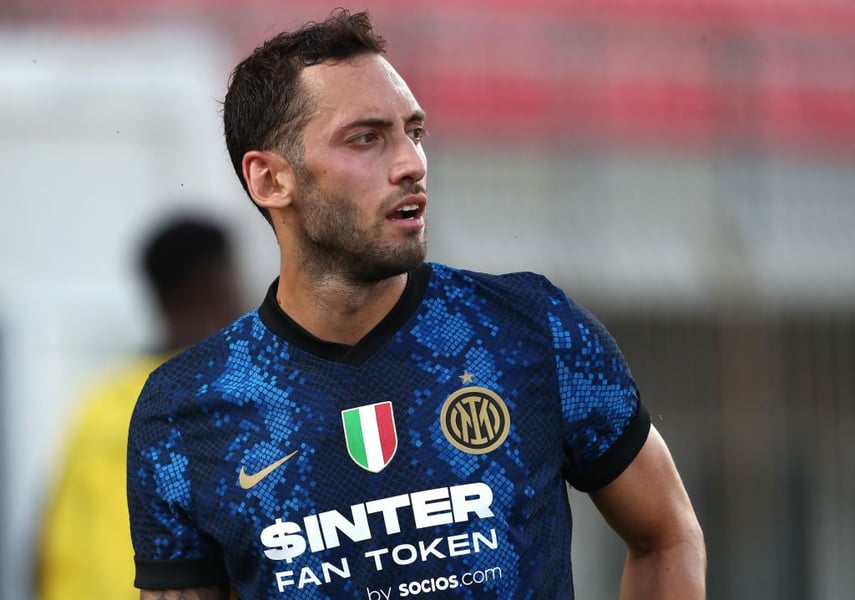 AC Milan continued their unbeaten start to the Serie A season with a 1-1 draw against Inter Milan in an enthralling Milan Derby on Sunday, maintaining the Rossoneri's seven-point lead over the reigning Italian champions.

Hakan Calhanoglu, who crossed the divide by joining Inter on a free transfer from Milan in the summer, quickly made his mark against his former employers by winning and scoring a penalty 11 minutes in.

But Stefan de Vrij headed into his own net to draw the Rossoneri level six minutes later before Milan keeper Ciprian Tatarusanu superbly saved a Lautaro Martinez penalty in a frantic first half.

Milan substitute Alexis Saelemaekers was inches away from a stunning 90th-minute winner when his powerful strike cannoned off the foot of the post, as Stefano Pioli's side dropped points for just the second time this season in the league.

"The glass is half full, it was a complicated match. In the end, the performance was positive against a strong team, but we showed that we are also strong," Pioli told DAZN.

"We were brave, especially in the defensive phase. We attacked with a lot of players in the first half and showed great desire to bring home a big result. Only us and Napoli are still unbeaten in the top European leagues."

Milan remain second with 32 points, behind leaders Napoli on goal difference, while champions Inter are third with 25 points.

It is the first time the Rossoneri have registered as many as 32 points after 12 games of a Serie A season in the three points for a win era.

The stakes were high for both teams, with Milan having the chance to go ten points clear of one of their major title rivals and Inter desperately needing a result to keep hopes of a successful Scudetto defence alive.

"For us the glass is half empty because, with the chances we created and the penalty we missed, we deserved more," Inzaghi told DAZN.

"But we were up against a great team that is deservedly on top of the table. We are lagging behind, but there is still time and games like this make us more self-aware."

The game started with a bang when Calhanoglu was tripped by Franck Kessie to win a penalty, which he converted before celebrating in front of supporters of Milan, the club he represented for four years.

Inter’s lead lasted only six minutes before De Vrij headed a dangerous cross into his own net, but the Nerazzurri had a golden chance to regain the advantage when Fode Ballo-Toure brought down Matteo Darmian to concede a second spot-kick.

This time Martinez stepped up, but the Argentina international’s effort was saved by Tatarusanu, who sprung to his right to get a hand to the shot.

Inter cranked up the pressure as Nicolo Barella had a shot cleared off the line and Martinez shot wide from a promising position, and after the break, nobody could get a touch on Calhanoglu’s dangerous drilled volley across the six-yard box.

Milan finished the stronger as a Zlatan Ibrahimovic free-kick required a smart save from Samir Handanovic, but Saelemaekers came closest when his shot thumped the post and Kessie sent the rebound wide.