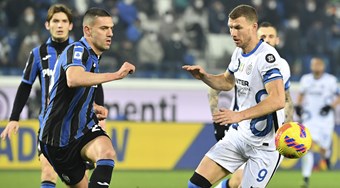 Atalanta gave Inter Milan's Serie A title rivals a boost on Sunday with a goalless draw which ends the champions' eight-match winning run.

A keenly-fought contest in Bergamo finished with a blank scoresheet despite each side creating a handful of golden scoring opportunities, with goalkeepers Juan Musso and Samir Handanovic excelling between their respective sticks.

Simone Inzaghi's Inter stay top but Milan, who are two points behind their local rivals in second, can take the summit with a win over Spezia at the San Siro on Monday night.

Atalanta stay eight points back in fourth but can take huge credit from their display with a host of key players unavailable injured or with Covid-19 infections.

They are a point behind third-placed Napoli ahead of their match at Bologna on Monday hoping to gain some ground on Inter, who like Atalanta will have played a game fewer come the end of this round of fixtures.

Edin Dzeko nodded wide the first clear chance of the night with a quarter of an hour gone, and 10 minutes later Musso kept the scores level with an outstanding save from Alexis Sanchez's close-range effort.

It was Samir Handanovic's turn to save his team four minutes after the break when he charged out to stop Matteo Pessina giving the hosts the lead from point-blank range.

From that scare, Inter then tried to push on for the win, but Inzaghi could hardly believe his eyes when first Giuseppe Pezzella stopped Matteo Darmian from scoring with a clearance at full stretch, and then Dzeko somehow headed over when Denzel Dumfries served him with a golden opportunity to open the scoring.

Handanovic again kept the scores level with 10 minutes remaining when he got down superbly to save from Luis Muriel, who had turned on the turbo to burst away from Alessandro Bastoni and Milan Skriniar.

And once Mario Pasalic and Danilo D'Ambrosio both wasted great chances to snatch the win for each side, an eventful match petered out into a draw.