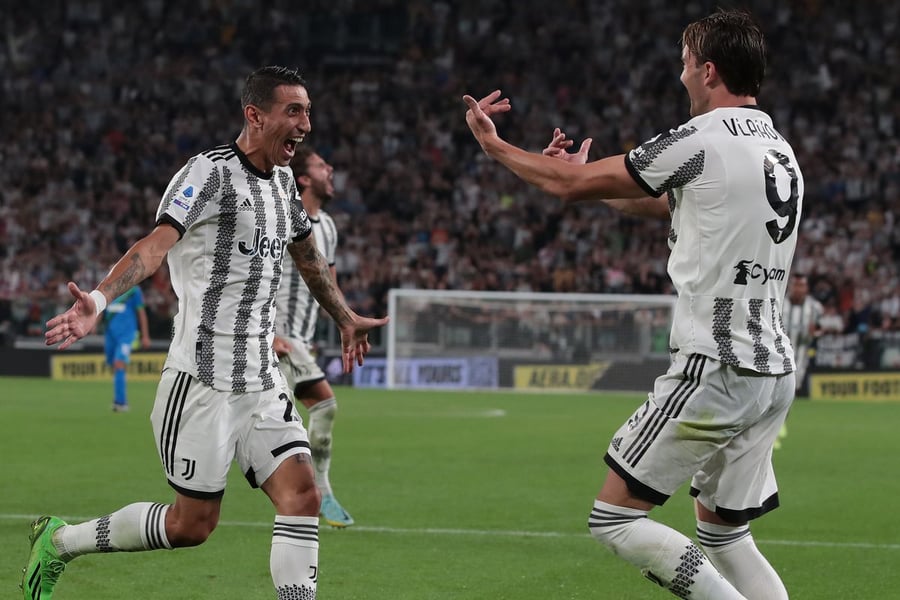 Angel Di Maria stamps his presence for Juventus with a volley debut goal while Dusan Vlahovic double, including a penalty, led the Turin club to a 3-0 home win at the start of their Serie A campaign on Monday.

Juve opened the scoring in the 26th minute through Angel Di Maria, who volleyed Alex Sandro's cross into the ground with the bounce taking it over stranded goalkeeper Andrea Consigli.

Vlahovic doubled Juve's lead with a penalty in the 43rd minute, awarded after Gian Marco Ferrari prevented the Serbia international from scoring by holding him back with both arms.

It was his 10th goal for Juve since joining the club in January from Fiorentina, having earlier fired wide of the post.

Vlahovic got his second in the 51st when he pounced to score from an assist by Di Maria, who had to come off in the 66th minute with a groin problem and was replaced by Fabio Miretti.

The 34-year-old Argentine forward joined Juventus as a free agent in July on a one-year deal after leaving Paris St Germain at the end of last season. Read full story

"How do I feel playing with Di Maria? It is an incredible feeling, it is a great pleasure to play with such champions, I thank him for the assist," Vlahovic told reporters.

"What matters is being available for the team and win. He played an extraordinary match."

Vlahovic almost capped his performance with a hat-trick in the 86th but his attempt was deflected wide of the post.

Juventus travel to Sampdoria next Monday after Sassuolo host newly-promoted Lecce on Saturday.

Napoli also got off to a flying start with a 5-2 win at Verona in their Serie A opener earlier on Monday.

Second-half goals by Piotr Zielinski and Stanislav Lobotka helped Maurizio Sarri's side move 4-2 ahead before Matteo Politano hammered in a fifth to deal the final blow.