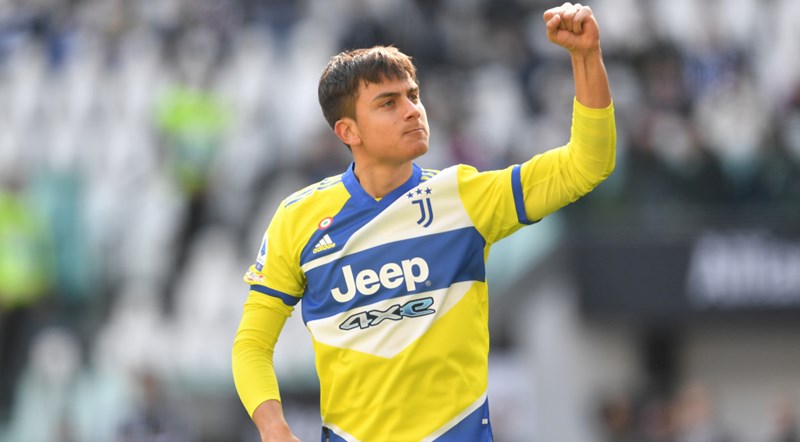 Paulo Dybala and Dusan Vlahovic earned Juventus a comfortable 2-0 win over bottom side Salernitana on Sunday, as Massimiliano Allegri's side remained in the  Serie A title race after Champions League humiliation.

Starting his first game in more than a month after an injury layoff, Argentine Dybala wasted no time in getting back among the goals, sweeping his side in front inside five minutes.

Serbian striker Vlahovic then missed a glorious chance to make it 2-0, before making one count, rising highest to head home and effectively put the game to bed in the 29th minute.

In the second half the visitors rallied and created some openings of their own, with Federico Bonazzoli's volley brilliantly kept out by Juve goalkeeper Wojciech Szczesny, but they could not force their way back into the contest.

The hosts held on to stretch their unbeaten league run to 16 matches, closing the gap to leaders Milan to seven points, while also now sitting one point behind champions Inter Milan in third.

"My job is to do well in these final weeks of the season," Allegri said after the match. "Once we raised the intensity level this season and played more as a team, the results have been marvellous.

"It's an important stage of the season, we can still have our say in Serie A and the Coppa Italia."

Before Sunday's encounter, Allegri had urged his side to forget their third successive Champions League exit at the last-16 stage in midweek by putting Salernitana to the sword, with the Juve coach going for it by naming both Dybala and Vlahovic from the start.

It did not take long for the pair to combine as Vlahovic superbly played in Dybala, who cut on to his left before firing in off the post.

January signing Vlahovic then channelled his inner Cristiano Ronaldo, leaping high into the air to head home his fourth Serie A goal for Juve to continue his impressive start to life in Turin.

The rest of the match was just about seeing out the result that keeps Serie A's most successful side in with a shout of winning the Scudetto when they had looked well out of the race after a disappointing start to the season.