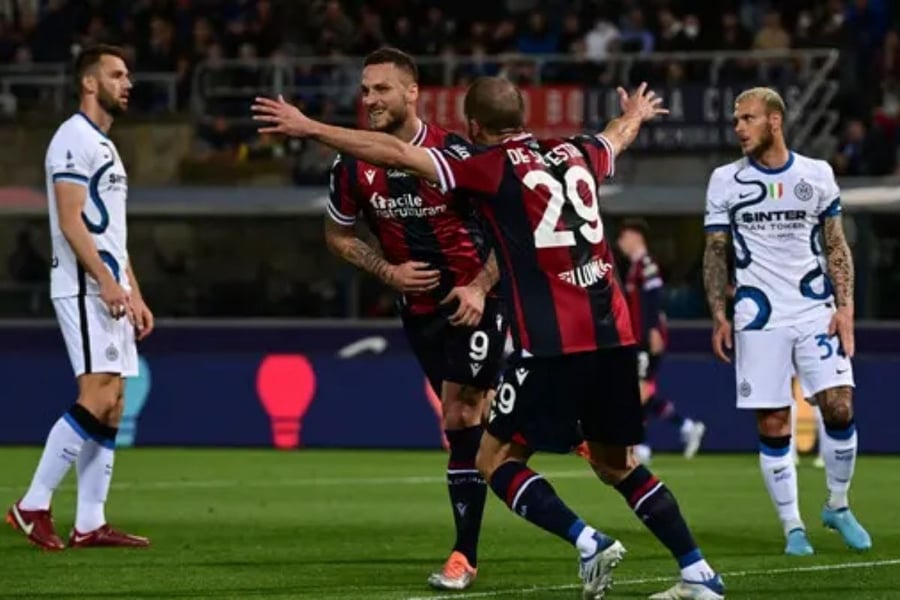 Inter Milan substitute goalkeeper Ionut Radu's howler cost his side as they slipped to a 2-1 shocking defeat at Bologna on Wednesday, with Simone Inzaghi's team missing the chance to go top of Serie A.

The match was originally due to take place in January but was postponed after numerous COVID-19 cases were discovered in the Bologna squad.

Champions Inter knew victory from the game in hand on AC Milan would see them climb back to the Serie A summit and they wasted no time in taking the lead, with Croatian forward Ivan Perisic drilling home inside three minutes.

The home side responded well, however, and got back on level terms in the 28th minute as the in-form Marko Arnautovic glanced a header into the net - the Austria international's fourth goal in his last three appearances.

Chances came and went for Inter as they looked to regain their lead before Radu, deputising for captain Samir Handanovic who was absent with a back injury, missed his kick nine minutes from time, allowing Nicola Sansone in to score a simple winner.

The defeat, Inter's first in 12 in all competitions, leaves them on 72 points from 34 matches, two points behind leaders Milan. Bologna stay 13th on 42 points.

Sandro Tonali's stoppage-time winner at Lazio on Sunday had ensured Milan regained top spot, but in-form Inter, on the back of four successive league wins, were expected to make a swift return to the summit.

As the game in Bologna approached the latter stages, it looked like there was only going to be one winner, before a huge moment in the season took place as Radu, with nobody around him, let the ball pass his foot as he tried to clear it, with Sansone tapping in almost on the goal-line.

"There is bitterness, it is normal that this is the case," Inzaghi told DAZN. "Now we are no longer masters of our destiny, we will have to look at what Milan will do and win all our games.

"Radu played against Empoli (in January) and always trains in the best way. If attackers or defenders are wrong we talk less about it. It was an injury (to Handanovic) and injuries must always be taken into consideration. He (Radu) must rest assured, he is an excellent goalkeeper."

Elsewhere in Serie A on Wednesday, Atalanta and Torino played out a thrilling 4-4 draw in Bergamo, and Udinese thrashed Fiorentina in Florence 4-0.