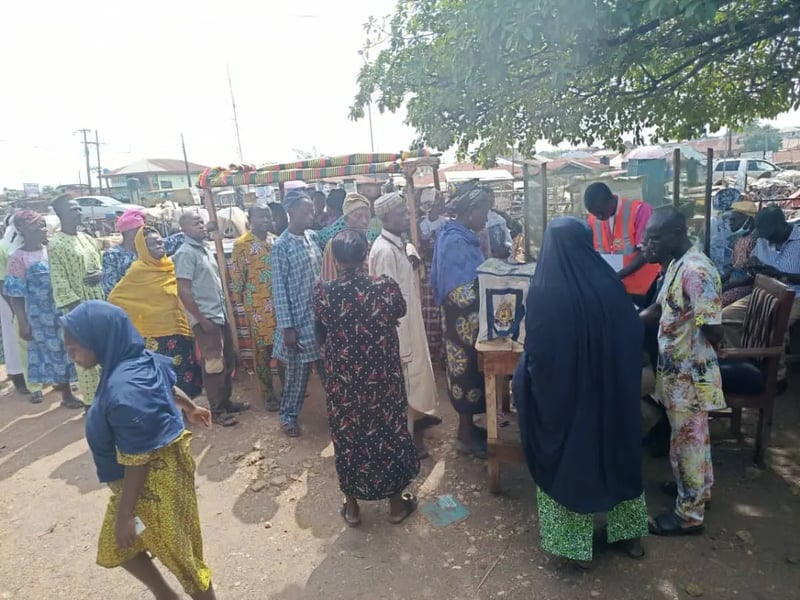 On Saturday, February 25, 2023, the focus of the rich, poor, young, old, citizens, and foreigners will be fixed on Nigeria’s presidential election.

Since we unpacked the fourth republic in 1999, the election is the seventh of its kind.

Our findings reveal that Nigerian voters might not vote on a clean slate.

Seven key factors will influence how they vote and reflect on the election results.

Even before the eventual presidential flag bearers for different political parties emerged, the heat of undue ethnicity has been brewing.

But the country made an accidental but colossal mistake by producing frontrunner candidates from the three major ethnic groups in this election.

Most Nigerians will vote for candidates from their group or subgroup in the coming election.

It is even becoming more obvious that the support structures of the leading candidates hinge on those who share a common cultural background or descent with them.

Words like “One’s child’s backside cannot be empty while decorating another man’s offspring with royal beads" have entered our political parlance.

Meanwhile, the candidates from the biggest party structure and likely winners are either Hausa/Fulani, Yoruba or Igbo, the three most dominant ethnic groups in Nigeria.

Without considering capacity, competence or readiness to pull the country out of its national disservice, voters from the north could pitch their tent to Atiku Abubakar, a former vice-president of the country (1999-2007), the presidential candidate of the People’s Democratic Party (PDP).

When Senator Bukola Saraki, a chieftain of the PDP, appeared on a political TV programme last week, he also inferred that the PDP would sweep the bulk of the northern votes.

Rabi’u Musa Kwankwaso, a former governor of Kano State and the presidential candidate of the New Nigeria People’s Party (NNPP), could also be hoping for similar luck.

Members of the party who have spoken on political spaces on Twitter have concluded that the votes from the state he governed, Kano and some other states who believed in the Kwankwasiyyah movement are enough to take Kwankwaso to Aso Rock.

In southwest Nigeria, Bola Ahmed Tinubu, the APC presidential candidate, set the pace for himself and his supporters have followed suit.

The “Emi lokan” statement of political denigration will remain in the Nigerian political space for a long time.

He is a Yoruba man, and many Yoruba people have rallied around his candidacy.

The argument has been that he is the only Yoruba man on the ballot who can do the job. Must the Yoruba adjective be included?

The Labour Party candidate, Peter Obi, an Igbo from the southeast and former governor of Anambra State, is riding on a similar standpoint that a president has never come from the southeast, so the time is now.

Also, the pattern of Obi’s support has been majorly from the Igbos in different parts of the country.

And looking at the undocumented practice since the fourth republic that presidential powers should be rotated between the north and south, most northern governors, powerful interest groups, the elite blocs, and socio-cultural organisations have made their decisions that the next president should come from the south.

The decision will likely affect the outcome of the forthcoming election.

The yearnings of the southeast and the northeast will also affect the voting patterns in those zones because they are yet to produce a president in this dispensation.

And now, they have candidates from established political parties.

Though religion is sacred, political actors have found ways to incorporate it into Nigeria’s voting criteria.

Therefore, it is likely to accompany ethnicity in how people vote in the coming election.

It is essential to state that there are more than two religions in Nigeria but since 1999, the country has accommodated a religious duopoly; a Muslim-Christian pattern and vice versa.

For political reasons, as maintained by the APC candidate Tinubu, the order has been broken.

He is a Muslim and chose Kashim Shettima, a Kanuri Muslim and former governor of Borno State, as his running mate.

The duo has received backlash from both opposition parties and interest groups ever since.

On the other hand, as much as the Muslims wouldn’t mind, the Christians have not found it endearing.

The religious disagreement will upset the voting pattern for or against the presidential frontrunners.

Across political lines, there is a growing belief that there is a national conspiracy against the Igbo people.

He implored the party to ensure equity, justice and fairness and should not marginalise any of the groups that make up the party.

Even in the PDP, the shout was uniform.

Besides the Ohanaeze Ndigbo, the pan-Igbo socio-political organisation, other individuals have endorsed Peter Obi on the premise that he comes from a constantly marginalised group, among others.

Many who believe in the historical unhappiness could stay behind the presidential candidate of Igbo extraction.

Similarly, others have also become uncomfortable with the persistent alienation of the other parts of the southwest.

There has been an outcry that all administrative entitlements belonging to the southwest start and ends in Lagos State.

Those who think such has been the case might also find another political home.

There is also the feeling that the Igbo is against the Nigerian project.

Therefore, they only align now when the region has a candidate.

To bank on the insinuation, some groups, mainly from the north, have been defensive that the Igbos are behind Obi because of revenge and would pounce on the other regions if their kinsman becomes president.

We must state clearly that most of these hearsays are handiworks of political strategists determined to sway Nigerians’ emotions to favour their candidates.

They use every means they can to pass their messages and instil national historical debacle.

Unfortunately, some Nigerians will fall for most of the unconfirmed propaganda and will allow it to determine how they vote in the coming election.

Some of the members of the Christian bloc of the APC are still aggrieved with the Muslim-Muslim presidential ticket of the party.

The sole reason that a former Secretary to the Government of the Federation, David Babachir Lawal, left the party to join the Labour Party.

There are also talks that the Vice President, Yemi Osinbajo, is miles apart from the APC presidential pursuit and is silently working against the party.

Some even said President Muhammadu Buhari himself is indifferent towards the candidacy of Bola Tinubu.

The party’s Director of the Civil Society of the Presidential Campaign Council (PCC), Najatu Muhammad, is the latest to dump the party.

One would think that the major opposition, the PDP would pounce on the disadvantage until it dawns publicly that no fewer than five governors have not been following the party’s campaign train.

From Governor Wike to Makinde, Ortom, Ikpeazu and Ifeanyi Ugwuanyi, as AllNews Nigeria has always given you the bits and pieces, the G5 governors are staying strong to work against the party in the presidential polls.

There are also similar trends in the Labour Party of late.

Sources told our correspondent that in most northeast states, the Labour Party is already collapsing their structures and joining either the PDP or the APC.

In southern Nigeria, NNPP is the party of the aggrieved.

Most party members do not have deep connections with Rabiu Kwankwaso and the party’s leadership.

These roles could be legitimate or otherwise to give their parties an unassailable edge.

The country has witnessed how political parties and their united structures have garnered votes for political office seekers.

But with the irreconcilable differences creeping in within these parties regardless of their sizes, it is unlikely that it would be business as usual.

Meanwhile, the party that could utilise the collective party disunity to its greatest advantage have an edge at the polls.

The famous saying, "He who holds the piper dictates the tune" is relevant to Nigerian politics and the outcome of the forthcoming presidential election.

Despite the overhyped political socialisation in the country, recent elections have shown that some Nigerian voters still receive tips and inducements before voting.

This time, rubbing the voters’ backs could be effective, considering how structural poverty has become a national weapon.

In an interaction with Nigerians within voting age, some potential voters, especially youths told AllNews Nigeria politics desk that they would follow those who do their bidding because they need financial support to cope with this challenging period.

The sale of Permanent Voters Cards (PVCs)and vote buying have become the most competitive business in the electioneering season.

There is no indication that there would be much change this time.

The political orientation, education and awareness done by concerned stakeholders might not help because our interaction with some voters revealed that the highest bidder game would still be crucial to the outcome of the 2023 presidential election.

President Muhammadu Buhari’s leadership has not recorded many successes, but to a large extent, it has deepened confidence in the electoral umpire, the Independent National Electoral Commission (INEC).

Unlike we have it in our recent history, Governors including Godwin Obaseki (Edo, PDP), Professor Chukwuma Soludo (Anambra, APGA), and Ademola Adeleke (Osun, PDP) have alluded to how the president has allowed due process and the will of the people to stand despite emerging victorious from the opposition party from the federal government.

At this crucial time, the commission’s independence will largely affect the election’s outcome, considering it is too emotionally driven this time.

On the other hand, the unfavourable attack, including the burning or stealing of some of the commission’s materials, the consistent attack on INEC offices, fake names on the electoral register and underage registrations in some parts of the country are issues that have opened nerves for doubts.

Also, the effectiveness of the innovations in the 2022 Electoral Act, such as the electronic transmission of results from the polling units and the Bimodal Voter Accreditation System, will go a long way in the outcome of the polls.

Nigeria is relatively insecure for a national assignment with immeasurable importance.

The general insecurity in Nigeria may make it difficult to conduct credible elections in some parts of the country.

In no small way, it could truncate the chances of those who have these affected areas as their soft spots.