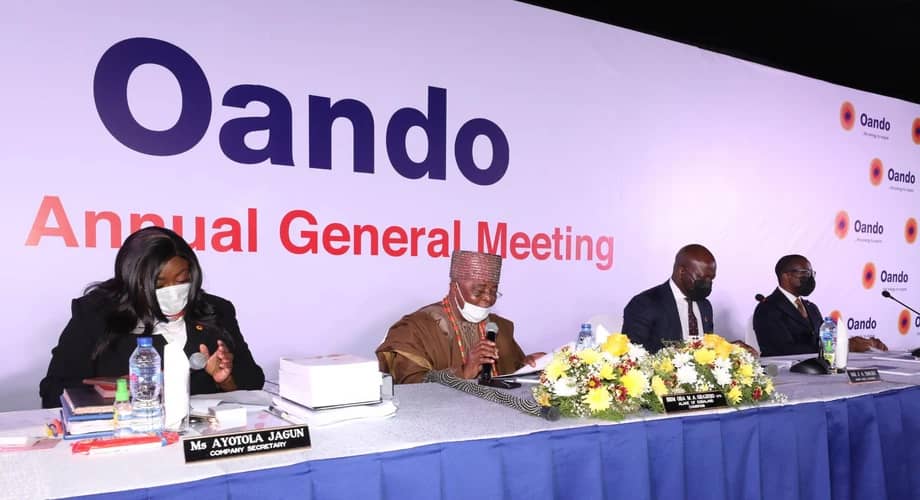 Oando Plc shareholders have expressed renewed confidence in the company's management while encouraging the government to collaborate with stakeholders to address the issues affecting the oil and gas sector.

According to a statement on Oando's website, the 43rd Annual General Meeting (AGM) of the firm was conducted on Wednesday in Lagos.

According to the statement, in accordance with the COVID-19 safety protocols, the shareholders were represented at the AGM by proxies of their various associations.

The statement claims that every proposal put up at the meeting was adopted, including the choice of Nana Mede and Ronke Shokefun to serve as non-executive directors.

The directors of Oando received praise from the shareholders for adding two women to the board of directors.

"We expect that Shokefun and Mede would benefit us, said Patrick Ajudua, an Oando shareholder.

"I want to applaud the management for the selection of Shokefun and Mede as directors," he said.

In a similar vein, Dr Farouk Umar, another stakeholder, expressed his satisfaction with the outcome and praised the board for choosing the pair.

The issue of security in the nation, including vandalism, banditry, and terrorism among others, also caused worry among the shareholders.

They pleaded with the government to work together with numerous public and private sector players to find a solution to this problem, which they claimed was harming the economy.

Patrick Ajudua, a stakeholder, said: "I'm concerned about the problem of oil theft.

"This suggests that oil theft is costing the corporation a lot of money.

“This also makes it difficult for the country to meet the Organisation of the Petroleum Exporting Countries quota and negatively impacts our Gross Domestic Product.

“I applaud the approach by the Nigerian Maritime Administration and Safety Agency using their aircraft to track vandalism.

“I believe that when various stakeholders join forces, we’ll have a resolution to this issue.”

"I want to assure you of our support to Oando and once we can solve these lingering concerns of oil theft, we will be able to enjoy the fruit of our labour," he said in a statement to the management of Oando.

The executives of the various shareholders and proxies also urged Oando's management to concentrate on business decisions that would benefit everyone.

Adewale Tinubu, Group Chief Executive of Oando Plc, responded to shareholder statements by reiterating the management's dedication to consistently acting in the best interests of shareholders.