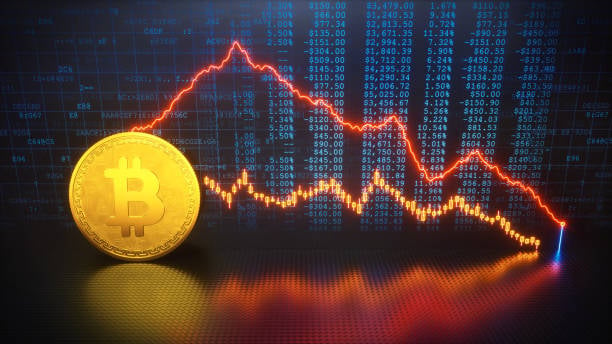 Bitcoin fell to its lowest level since September 9, 2021. The price of bitcoin on http://www.coinmarketcap.com at the time of compiling this report was US$35, 658.47.

It was some two days ago when the price was gathering strength, hoping that some elements of good news from North America, South America, South East Asia, and the cold region of Russia would help the digital coin regain its lost pride in terms of making records again.

Nobody saw it, absolutely nobody. "It was around 5:14 pm on Thursday, February 20, 2022, when my aim to get back to US$56,000 gained steam and needed traction," Bitcoin said rather confidently and bullishly, hoping that it was sure going to be the talk of everybody again, "for good this time around."

"When all of a sudden, from nowhere, a ballistic missile of catastrophic proportion hit me so hard that I started crash landing," Mr. Bitcoin, looking defeated, said rather faintly, hoping for help from whale sharks or pro-bitcoin governments to help him get back on track.

Late last year, following a resurgence in price, bitcoin hit a market cap of almost US$1 trillion, making it the most capitalized asset in the world. This was when the price made history by reaching a unit exchange price of US$60,000.

What was the effect, you may ask? A lot. It made many of its holders' millionaires and multimillionaires. Some of them even became billionaires.

Many companies aiming to provide alternative asset investments have sprung up. Even some went into the production of bitcoin by utilizing clean and renewable energy sources for the benefit of the environment.

Some analysts, like Ian King of the Profit Framing Show, have spoken gloriously about the future of bitcoin in the past.

He believes that bitcoin has the potential to hit US$100,000 in the near future.

So what went wrong this time?

The year 2021 wasn’t a good enough year for the apex digital currency as governments all over the world spoke badly about the coin. Not just that, they drafted and implemented policies to curb its influence on the global economy. From Nigeria, which has an outright ban on all forms of bitcoin, to China, which has a heavy crackdown on bitcoin miners and facilitators, to name a few.

However, the positive drive from El-Salvador, Zimbabwe, and Kenya, and a relaxed atmosphere from regulators in the United States of America gave the necessary belief to drive towards growth figures again.

Unfortunately, the crackdown on bitcoin miners, traders, and investors in Russia might be responsible for the current drop in price.

According to www.bitcoin.com, the bank of Russia has proposed a ban on cryptocurrency transactions in Russia. They propose a total crackdown on bitcoin traders, investors, and transactions.

The bank explained that it was pertinent to curb the influence of cryptocurrencies, especially bitcoin, on the domestic economy. Bitcoin transactions in Russia were worth more than US$5 billion, making it the second-highest in the world, just behind the United States of America and slightly above Nigeria, which came third.

The proposal, which is currently undergoing review in the Duma, the lower legislative house in Russia, hopes to be granted the needed legal framework to eliminate bitcoin transactions in the country.

The bank also stated reasons such as an increase in electricity usage due to bitcoin mining activities in some less prominent regions as one of the reasons why the government has to put a stop to the influence of the cryptocurrency.

But most importantly, the bank raised the fear that if there is a burst in the global economy due partly or fully to bitcoin, the Russian economy may not survive it.

Therefore, the bank called for greater sanctions on the crypto ecosystem.

How do we expect Bitcoin to react?

1.) The automatic response of the coin is to fall, as a panic sell over the news sufficed, which it did. Many people try to close their positions and cash out, hoping that a recovery in the price above the critical level of US$35,000 will see the price start to bounce back.

2.) Bitcoin will be hoping for support from pro-bitcoin governments and large institutions to re-establish public trust in the coin.

3.) Bitcoin will also be hoping that retail buyers, investment gurus, and whale sharks will buy the dip in order to boost public trust in the altcoin.

Whatever decision you make, bitcoin is pleading with you to "PLEASE HELP."