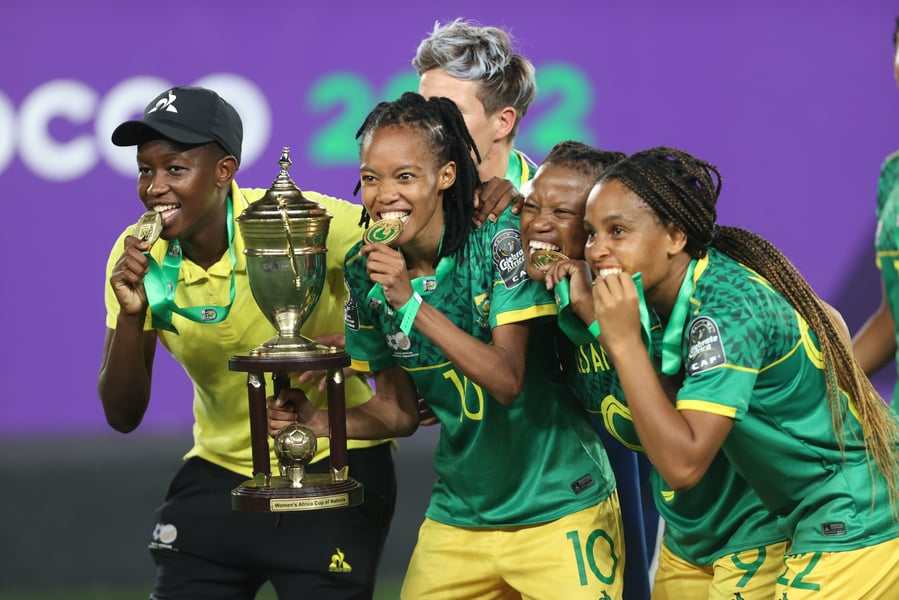 Hildah Magaia's brace in the second half claimed the first-ever Women’s Africa Cup of Nations (WAFCON) title for South Africa as they beat hosts Morocco 2-1 in Saturday’s final in Rabat.

It ended a run of five finals without success for Banyana Banyana, who completed the tournament in Morocco with a 100 per cent record, as well as securing qualification to next year’s Women’s World Cup in Australia and New Zealand

The only team to win all of their matches at the #TotalEnergiesWAFCON2022.

Banyana Banyana were a cut above the rest ✨ pic.twitter.com/7LvHq0UR9T

Magaia tapped in an excellent cutback from Jermaine Seoposenwe, who ran onto a long ball out of defence to create the opening goal as she held off the defence to provide an expert pass in the 63rd minute.

It took the sting out of a frenzied atmosphere created by a sellout crowd at the Prince Moulay Abdallah Stadium, where only weeks earlier South Africa’s men had lost to Morocco in a Cup of Nations qualifier.

Magaia then doubled the lead in the 71st minute with another close finish, this time from a cross out wide from Karabo Dhlamini that Morocco’s defence failed to cut out.

But a lapse in concentration saw South Africa lose possession and offered Morocco hope of a comeback as Rosella Ayane pulled one back in the 80th minute after being set up by Fatima Tagnaout.

It meant an anxious last 10 minutes for Desiree Ellis’ team – plus another nine minutes of referee’s time added on – before they could get their hands on the trophy.

The game started with a high tempo, fueled by the large crowd who greeted every Moroccan touch with a cheer and Banyana move with a chorus of whistles.

After 11 minutes, there was a muted shout for a penalty, but while Tagnaout’s challenge on Magaia in her own penalty area was risky, it proved expertly timed.

Both sides pressed high to allow little space for chances and, as a result, the first 30 minutes went by without any goalscoring opportunity.

South Africa had a chance with a long-range free-kick in the 32nd minute that Nomvula Kgoale hit it onto the roof of the net and three minutes later Seoposenwe played through an inch-perfect pass for Magaia, but her left-footed effort was blocked by a brave save by the home goalkeeper Khadija Er-Rmichi.

Magaia had another chance with a free-kick five minutes before the break but was unable to properly bend the ball and was well off target with what looked like a good opportunity.

Morocco had their first real effort a minute later for tall English-born striker Ayane, who tried to rag the ball from behind her and was unable to find the target.

The second half was a closeted affair until Magaia opened up the scoring, suddenly offering the occasion a rip-roaring finale.