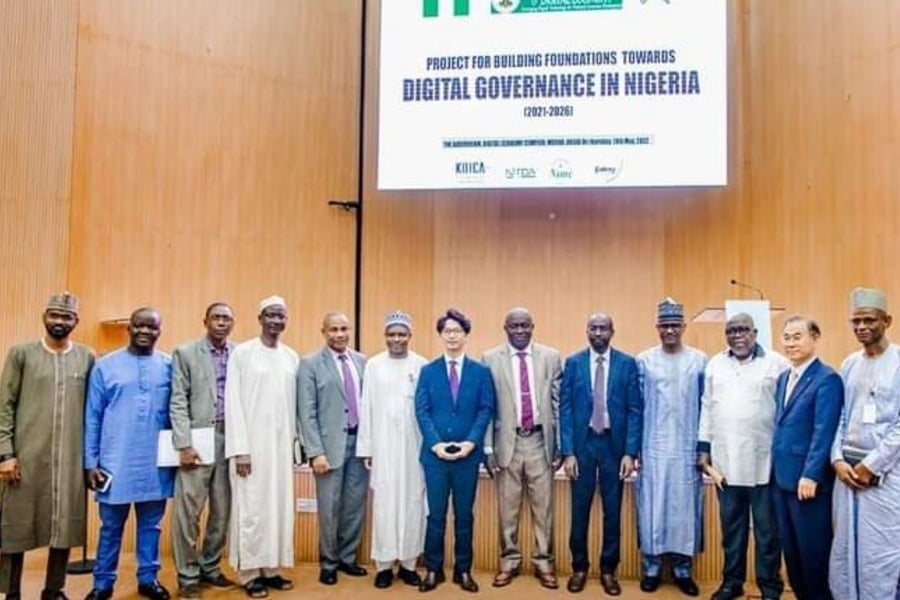 The Republic of South Korea is to spend 13 million U.S. dollars on the second phase of the Nigerian e-Government national master plan 2021-2026.

The South Korean Ambassador to Nigeria, Kim Young-Chea, said this at the official commencement of the “Project for Building Foundations towards Digital Governance for Nigeria” in Abuja on Friday.

The agreement provides that the project will be funded by Korean International Cooperation Agency’s (KOICA) grant aid.

“Today’s project, funded by KOICA’s grant aid to the tune of 13 million U.S. dollars, is expected to enhance capacity for the further execution of key initiatives of the national e-Government master plan.

“It is expected to boost competencies for the e-government service delivery, and the development of the Government Service Portal.

“It can also create increased access of the NIN enrolment for ordinary people,” he said.

He said that South Korea’s success in e-Government development was portrayed as one of the world’s most successful stories.

He added that there were many aspects of unique Korean experiences that could be adapted to suit other partnering countries.

Young-Chea added that the continued partnership between Nigeria and South Korea had provided an active platform for both countries to collaborate and take advantage of most of the Korean experience.

In his remarks, the Minister of Communications and Digital Economy, Prof. Isa Pantami, recalled that the first phase of the project commenced in 2013.

Pantami, who was represented by the Permanent Secretary, William Alo, said that KOICA supported the project as part of Bilateral Cooperation between Nigerian and the South Korean Governments.

He said that the master plan would guide the adoption and implementation of the e-Governance programme in the country, which was approved in 2019 by the Federal Executive Council.

He said the ministry under the first phase, embarked on the process of developing policies, frameworks and strategies for robust implementation of plan management and implementation of e-Governance initiatives in Federal Government institutions.

He also recalled that the ministry in August 2021, signed the agreement with the Korean government through KOICA for the implementation of the second phase of e-Government development for Nigeria.

“This will expand the delivery of government digital services through the enhancement of the government services Portal.

He said what the ministry and KOICA were doing was in line with the government’s policy to use Information Communications Technology (ICT) to drive transparency in governance.

He used the opportunity to seek more support from the South Korean government.

“We hereby solicit your support in the implementation of the project, which promises to have boundless impacts on Nigeria’s digital transformation agenda and national development,” he said.

The Programme Director, KOICA, Nigeria, Prof. Hung Kook-Park, said Korea was hoping that by 2026 Nigeria should have moved from the 140th position in the e-government ranking to be among the first 100.

“Currently Nigeria is ranked 140 in the world’s e-Government index ranking but we want Nigeria to be below 100 by the year 2026.

“That is what we hope to achieve with this programme,” he said.