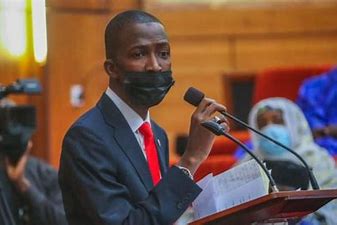 Chairman, Economics and Financial Crimes Commission (EFCC), Abdulrashid Bawa has warned youths against engaging in financial and other crimes that could ruin their future.

Bawa disclosed this at an annual conference organized by the Centre for Economic, Social and Population Research (CESPOR), Bayero University, Kano tagged 'The Future is Youth'.

The EFCC boss who was represented by the Head of Research in the commission, Abiodun Adebanji, emphasized that it has been projected that by 2050 the world population would be dominated by the youth because of this increasing population.

He added that currently, the youths constitute over 50% of the world’s population.

He expressed worry over indicators from the National Bureau of Statistics showing that 38.5% of the Nigerian youth are unemployed. This he said has generated a lot of concern giving that majority of the yahoo boys and inmates at correctional facilities are tough.

He clarified to the gathering that the recovered loot by the EFCC is being kept at the Recovery Account domiciled at the Central Bank, pointing out that the commission does not keep a single kobo after the discovery.

He emphasized that there is no need for government to take proactive measures through reorienting the youth at all levels and that entrepreneurship programs in schools keep their minds occupied with the entrepreneurship mindset, adding that employment drastically reduces crime in a society.

Also speaking, the Minister of Youth and Sports Development, Sunday Dare, represented by the Chief of Staff in the Ministry, Alhaji Abba Yola, said the conference was apt given what the Ministry is doing, saying that the President believes that investing in the youth and positioning them to be patriotic, productive and selfless citizens is worth the effort.

He said sports development is another area where the Nigerian youth are making the country proud.

In a remark, the Vice-Chancellor, Professor Sagir Adamu Abbas cautioned the students against being used by money bag politicians as general elections draw nearer.

He charged them to desist from jeopardizing their future and concentrate on their studies.