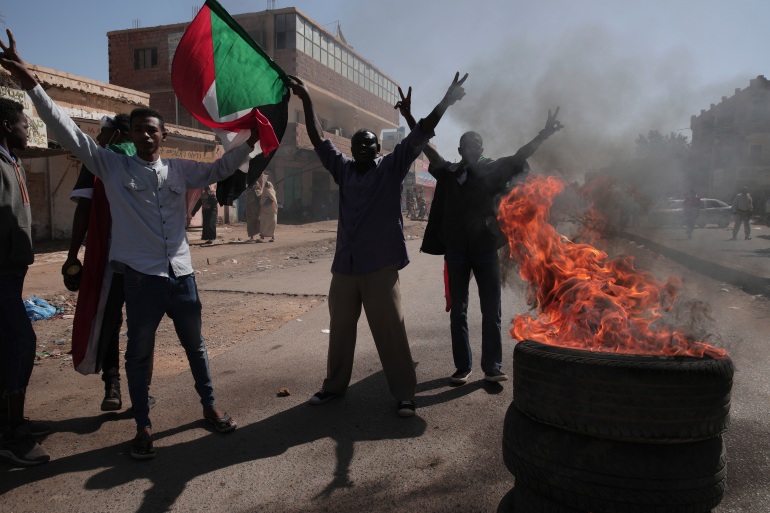 Protesters in Sudan have erected barricades across roads in Sudan’s capital, Khartoum, as a two-day general strike continues in response to the death of some protesters.

The Neighbourhood resistance committees and political parties called for the strike which began on Tuesday after seven people were killed in Khartoum on Monday.

The protesters have been demanding an end to military rule after the coup that took place on October 25, 2021.

The Khartoum State resistance committees said in a statement; “It is our duty to resist them until we are victorious or they rule an empty country after they have killed us all.”

On Tuesday, the country’s police confirmed the seven deaths, saying they used minimum force and had faced systematic aggression.

Since the coup began, at least 71 people have been killed and more than 2,000 injured by security forces.

Sudan’s University for Science and Technology suspended all activities, while several pharmacies and shops in parts of Khartoum were locked.

The Police fired tear gas at protesters who blocked roads and mounted barricades on Tuesday.

Last week, it was reported that a police general was stabbed to death.

Several sestern nations and the United Nations (UN) has expressed concern about the deaths. The UN special representative, Volker Perthes condemned the use of live ammunition and the U.S. embassy criticised the violent tactics of Sudanese security forces.

The European Union said in a statement;

“Through disproportionate use of force and continued detention of activists and journalists, the military authorities are demonstrating that they are not ready to find a negotiated and peaceful solution to the crisis.”