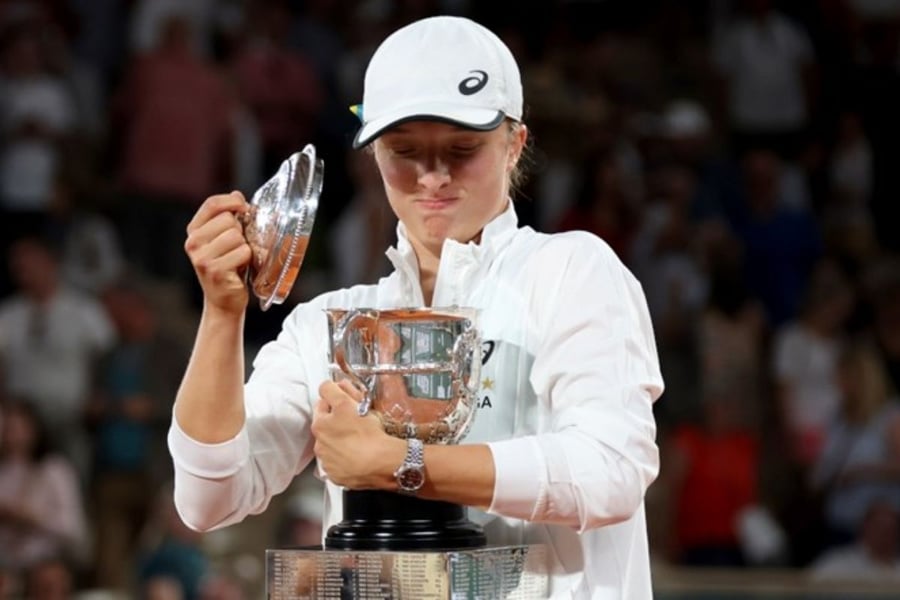 World No. 1 Iga Swiatek cruised to her second Roland Garros title by dominating teenager Coco Gauff in the final on Saturday, as the world number one claimed her 35th successive victory.

The 21-year-old Polish star stormed to a 6-1, 6-3 win in only 68 minutes on Court Philippe Chatrier, equalling Venus Williams's record for the longest winning run by a woman in the 21st century.

Swiatek celebrated her sixth straight title this year in the players' box with her friends and family.

"I told Coco 'Don't cry' and that's what I am doing. Congrats to Coco" said an emotional Swiatek.

"You are doing an amazing job. At your age, I was on my first year on tour and I did not know what I was doing. You will find it, I am sure of that."

A disconsolate Gauff was left sitting on her seat in tears after a nervous performance, punctuated by 23 unforced errors and three double faults.

The 18-year-old American came up short in her bid to become the youngest Grand Slam singles champion since Maria Sharapova won Wimbledon in 2004.

"I want to congratulate Iga, what you've done on tour in these past couple of months has been amazing," said Gauff, as the tears flowed again when she thanked her team.

"I hope we can play in more finals and maybe I can win one... I want to thank my team, I'm sorry I couldn't get this one today."

Swiatek, only the 10th woman to win multiple French Opens in the Open era, lost just one set in the tournament -- against China's Zheng Qinwen in the fourth round.

She has now won all three of her career meetings with Gauff, who was playing in her first major final.

Gauff will now turn her attention to Sunday's doubles final, where she will face home favourites Caroline Garcia and Kristina Mladenovic alongside compatriot Jessica Pegula.

Swiatek improved her remarkable record in the finals, having won her last nine on the WTA Tour.

Swiatek expressed her support for Ukraine during the trophy presentation, despite saying that she does not feel ready to speak about off-court issues before the final.

"I want to say to Ukraine, 'Stay strong'. The war is still there," she said, to cheers from the stands.