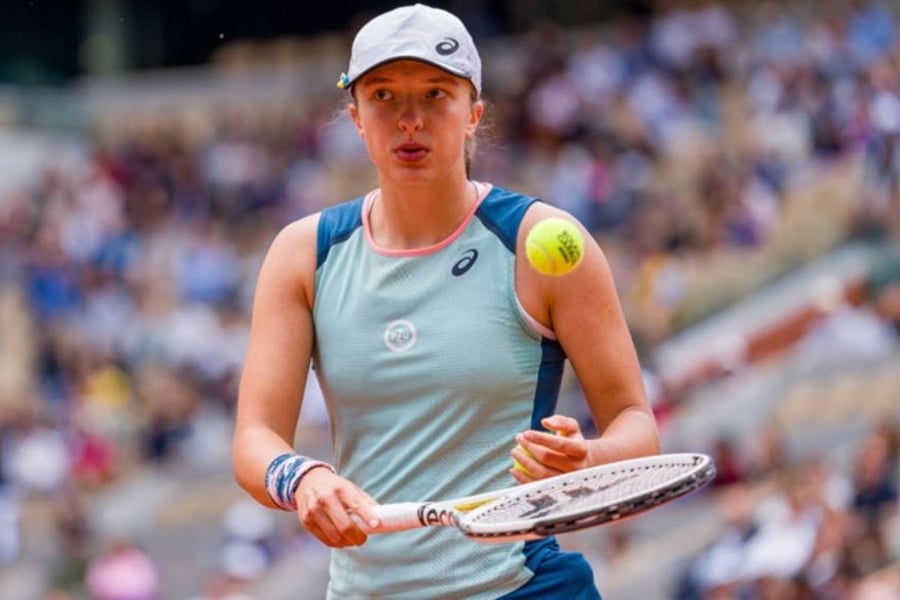 World No 1 Iga Swiatek was the only top 10 seed left standing at the French Open on Saturday after racking up her 31st straight win as third seed Paula Badosa and seventh-ranked Aryna Sabalenka crashed out.

Swiatek, the 2020 champion, dropped serve three times against 95th-ranked Danka Kovinic of Montenegro before sealing a 6-3, 7-5 third round victory.

"I wanted to play really aggressively but sometimes I felt I was hitting with too much power and it was hard to control," said the 20-year-old Pole.

Swiatek's winning streak is the best since Serena Williams's 34 successive victories in 2013.

She next faces Chinese teenager Zheng Qinwen who made the last 16 on her debut when French veteran Alize Cornet, playing in her 61st consecutive Grand Slam, retired with a leg injury, trailing 6-0, 3-0 after just 44 minutes.

Having stunned 2018 champion Simona Halep in the second round, Zheng becomes only the fourth Chinese woman to make the fourth round in Paris where compatriot Li Na won her landmark Slam title in 2011.

Cornet, the last Frenchwoman in the draw, was booed by a section of the Court Philippe Chatrier Court.

"It hurt more than my injury," she said.

Spain's Badosa, who made the quarterfinals in 2021, retired from her last 32 match due to a calf injury when she was trailing Russia's Veronika Kudermetova 6-3, 2-1.

Sabalenka, the seventh seed, slipped to a 4-6, 6-1, 6-0 defeat against Italy's Camila Giorgi who is into the fourth round for the first time.

The exits of Badosa and Sabalenka mean that for the first time in the Open era only one top 10 seed has survived to the fourth round.