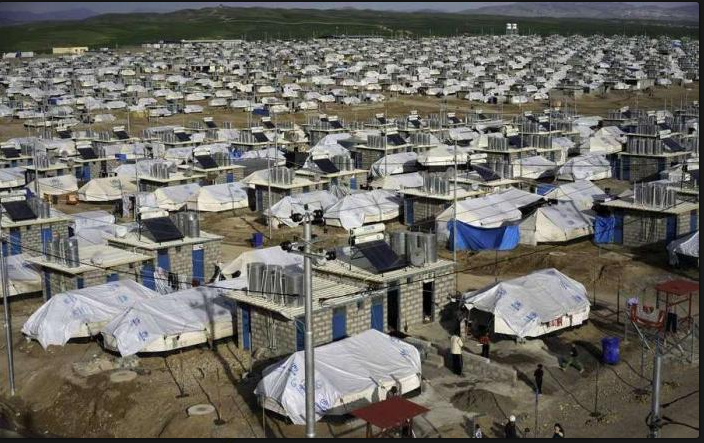 Darashakran camp, spreading over an area of almost 650,000 square meters was opened in 2013

The conflict in Syria created the largest displacement crisis that the world has ever seen, forcing millions to leave everything behind and flee to the neighbouring countries.

The last decade has been the darkest for Syrians and, as millions are now based in refugee camps around the Middle East, many have lost hope of ever coming back to their home country.

While some argue that Syrian refugees have been abandoned by the international community, there are nations that have welcomed hundreds of thousands of Syrians, helping them escape war and giving them a chance to dream of a better future.

Iraqi Kurdistan, for example, despite not having its officially recognised state, has generously welcomed Syrian refugees. In fact, out of 247,305 registered Syrian refugees in Iraq, more than ninety-eight percent live in the Kurdistan region.

For some, Iraqi Kurdistan became home, a place where they want to settle down and slowly put the pieces of their past lives back together. For others, however, living there is hell on earth, a constant reminder of their helplessness in the face of armed conflict that caused their displacement.

To get a better understanding of the challenges Syrian refugees who arrived in Iraqi Kurdistan face, I have recently visited the Darashakran refugee camp, located 42 kilometers north from Erbil city.

A look inside the Darashakran camp

The Darashakran camp, spreading over an area of almost 650,000 square meters, opened in 2013 and, according to what the camp’s security officers told me, it is now home to 13,000 Syrian refugees. Even though in theory refugee camps are temporary facilities, it is one of Erbil’s permanent camps.

Until late 2015 when a ‘tent-free camp’ initiative was launched by UNHCR, the UN Refugee Agency, refugees in Darashakran lived in tents, which was one of the biggest challenges they had to face each day. In Iraqi Kurdistan summers and winters could hardly be in sharper contrast, with temperatures falling from forty degrees Celsius in summer months to below freezing in winter. On that account, tents were not sufficient to protect the refugees from rough weather conditions.

On top of that, with no realistic prospects in sight for the situation in Syria to allow refugees to return and live there peacefully anytime soon, more durable shelter was needed. In turn, the tents have been replaced with houses made of concrete blocks, equipped with mattresses and latrines.

Thanks to UNHCR, refugees living in the Darashakran camp have access to safe drinking water and the houses are connected to a water network, which allows families to prepare meals and maintain good personal hygiene, thus decreasing the risk of disease outbreaks.

People living in the camp had been stripped of all their freedoms and happiness so this change meant a significant improvement in their living conditions. It was a step towards giving them the resources to rebuild their lives and restore their faith in humanity, at least to some extent.

Despite the improvements, poverty is prevalent in the camp

Even though living in small houses that make up the Darashakran camp is much more comfortable than in tents, overcrowding remains a major problem on the site. It is not uncommon for refugees there to have five or more children and most houses contain only two rooms.

During my visit to the camp I met a woman who lives in one of these houses with her husband and their eight children. The space is not big enough for all of them and some of the children have to sleep on the floor.

Another major problem that the residents of the camp face are the deficits of clean water. As its supplies are limited, bigger families do not have enough water resources to meet the daily demand of all family members.

Those who live in the Darashakran camp are allowed to leave and reenter the camp throughout the day and, if they have residency permits, they have the right to seek employment in Erbil. Accordingly, some families have been able to reduce their dependence on relief organisations and have been able to manage their demand for water and food on their own.

Unfortunately, only the luckiest manage to do so. The majority faces a high degree of discrimination when trying to enter the job market, thus they do not receive any income and are entirely at the mercy of charities for essential supplies such as food.

The woman I got a chance to talk to, for example, cannot work because she has to take care of her eight children and her husband is chronically ill, which prevents him from finding employment. They have no income coming in so when, what, and how much they eat depends on the donations they receive from NGOs operating in the camp.

What makes things even more difficult is the fact that four of their children are disabled and require constant assistance. Access to medical care in the camp is limited so they do not attend any rehabilitation sessions nor regular check ups. The essential equipment such as wheelchairs is also proving to be too expensive for the family so they only have one wheelchair for all four disabled children.

Living in the camp is not the life Syrian refugees want

‘Sometimes I wish for death because it must be better than living this way’, said the woman who invited me to her house in the Darashakran camp.

Indeed, back in Syria both her husband and her were working, had their own house, and did not have to worry about their children going hungry. Because of the war they lost it all and she does not think they will ever be able to live this way again.

For the most part, the facilities in the Darashakran camp allow Syrian refugees to lead a decent life and its residents can feel accepted by the host society. Nevertheless, the life of a refugee couples with inadequate housing and barriers to accessing employment, healthcare, and education. No matter how welcoming the host society is, if one does not have any documents and is isolated in a refugee camp located tens of kilometers away from major cities, creating new lives outside of Syria is not an easy task.

As the Darashakran camp is becoming a place where many are starting their own businesses and developing economic ties with Erbil city, some hope that it will eventually transform into a new city on the map of the region rather than an isolated enclave.

For the time being, such a scenario seems like a dystopian future but should it happen one day, it would allow for the full integration of Syrians into the society of the Kurdistan region of Iraq.

Katarzyna Rybarczyk is a Political Correspondent for Immigration Advice Service, an immigration law firm based in the UK but operating globally. Through her articles, she aims to raise awareness about security threats worldwide and the challenges facing communities living in low and middle-income countries.