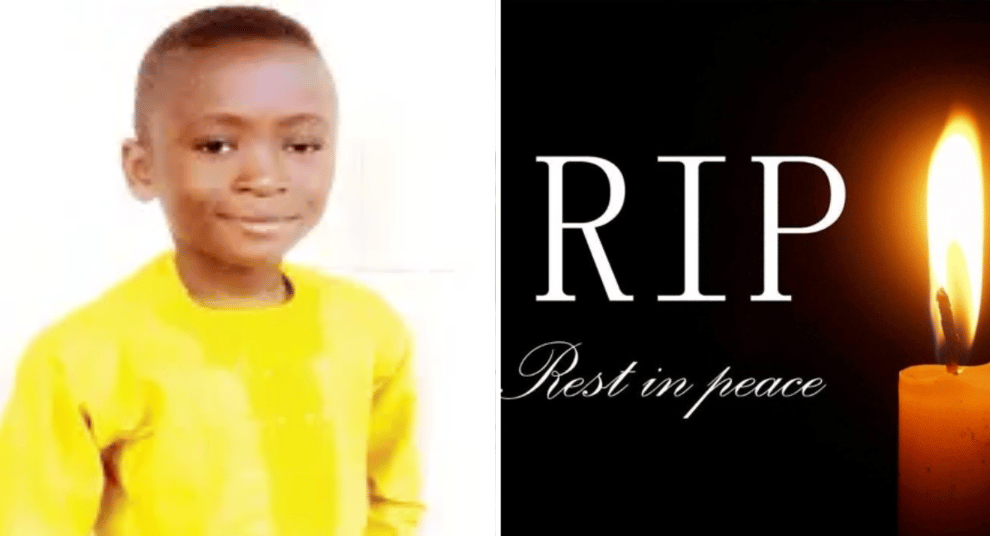 A teacher has reportedly beaten a student to death at Simple Faith Schools, Agbara, Lagos State.

The victim, Emmanuel Amidu (12) was allegedly beaten to death by the teacher (name withheld) for not completing his assignment.

Emmanuel who was a Junior Secondary School (JSS) 2 pupil died at the Lagos University Teaching Hospital, Surulere, on Thursday, May 12, 2022.

Speaking to newsmen, the father of the deceased, Akinola Amidu, said his son started vomiting shortly after the corporal punishment meted out to him and was rushed to a hospital, where he gave up the ghost.

The distraught father alleged that the school management was covering up his son’s death and protecting the Mathematics teacher, one Steven, who allegedly flogged Emmanuel for not completing his assignment.

“I was at home that Thursday because I was on leave. I recall that Emmanuel asked me for money to buy a new exercise book and I gave him N500 to buy the book and give the remaining change to his sister.

“Later that day, I was called by the management of the school that Emmanuel was vomiting. Meanwhile, this was a boy who left home without any health issues. I had to go to the school and we moved him to a hospital.

“I later learnt that the whole thing started after their class teacher, Mr Steven, beat the whole of his class for not completing their mathematics assignment.

“Emmanuel was actually using my phone torchlight to do his assignment a day before, but I had to collect the phone from him and his sister because I needed to be in contact with the office. We had issues with our electricity at home.

“It was at LUTH that I lost my son. Meanwhile, the management of the school quickly ran to the Morogbo Police Station at Agbara to report that my son died from vomiting.

“How can somebody just die from vomiting if nothing triggers it? The management of the school is trying to protect the teacher.”

Akinola, 45, demanded the arrest and prosecution of the teacher, as he urged the state government and the police to give the family justice.

Emmanuel’s 13-year-old sister, Rachael further confirmed to Punch that her brother vomited after he was beaten.

“I was called by our English teacher that my brother was not feeling fine and he did not eat and had been sleeping.

“His friend told me that they were beaten for not doing their sums in mathematics and after that he was just sleeping and vomiting.”

The school Principal, Adetayo Akanji, described the incident as unfortunate.

“I was there when Emannuel died on Friday and it was unfortunate that it happened this way. Yes, Steven flogged the whole class for not doing their sums, but not with the intention to hurt them.

“Some hours after that, he (Emmanuel) placed his head on his desk and he started vomiting, after which water was poured on his head.

“When he started to vomit, the proprietor called me and we took the boy to the hospital.

"In fact, the father joined us when he was taken to LUTH where he and I were running around to get prescribed drugs for him.

"But before we came back, he had given up. Our school reported the matter at the Morogbo Police Station.”

As of press time, the Lagos State Police Command is yet to issue an official statement on the matter

What The Child Rights Law Says

A lawyer, Toyin Taiwo, said the Lagos State Government had prohibited the flogging of children in schools.

“Children have rights and they must be respected. This is one of the reasons for training programmes organised for teachers, parents and guardians on how to handle children,” she added.

Furthermore, the Executive Secretary of the Lagos State Domestic and Sexual Violence Response Team, Titilola Vivour-Adeniyi, says all forms of abuse of children are criminal.

“This is evident in the enactment of the Child Rights Law which came into force in 2007 but was amended in 2015.

"Since then, the state has gone on to formulate policies that pertain to safeguarding and protecting children, especially in child centres, institutions and schools.

"To this end, all forms of child abuse, including physical or sexual, are criminal in nature and the full wrath of the law would be unleashed on anybody found culpable.”