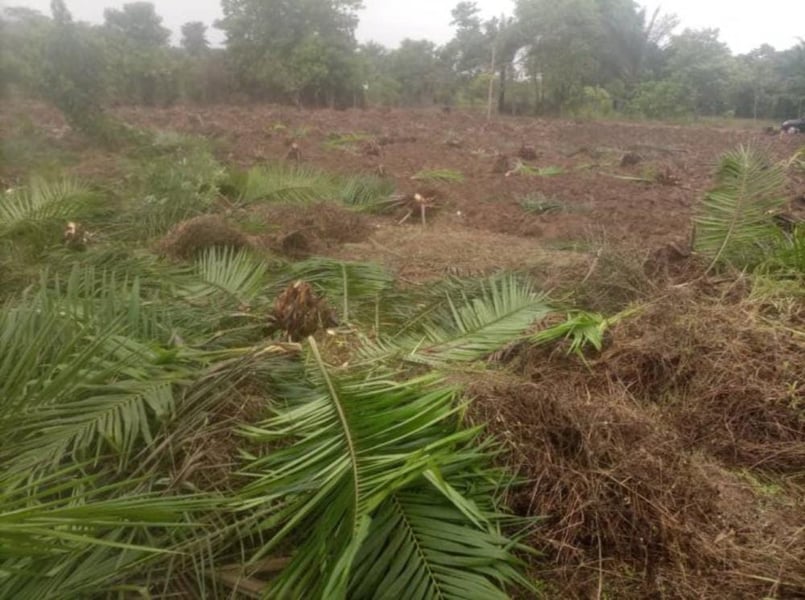 There is palpable tension in Isi-Uzo Local Government Area of Enugu State following an attack on Ikem community by armed Neke Community youths on Sunday.

The youths were said to have destroyed hectares of palm trees belonging to Chief Paul Ugwuagbo of Umuaram-Ikem on Sunday.

The victim, who conducted newsmen round the farm on Monday, narrated that his labourers were attacked on Sunday.

He said that they were chased out from the farm by the invading youths who went ahead to uproot over 100 palm trees of eight years old, claiming ownership of the land.

“This is a land that my farther owns Ikem Asokwa has cultivated from time immemorial.

"I am now 70 years old and the Enugu State boundary commission had resolved this land dispute up there at Ugwuokwunenne.

"The two communities, the state and local governments, the Catholic and Anglican Bishops from Isi-Uzo including Bishop Olinya of Eha-Amufu, Bishop Agbo of Nsukka Diocese who is from Neke, all these people signed the document, yet some people from Neke said no and went to court.

“We have been in court getting to ten years and Neke that went to court cannot exercise patience but has been attacking Ikem since 2012.

"If you go up you will see houses they are building but our people have maintained peace to allow the court make pronouncement.

“We are therefore begging the state government, the commissioner of Police and other security agencies to wade into this matter because Neke has over stretched the patience of our youths.

"The community leaders in Neke should hold their boys.

"The leader of these rampaging boys is a former councillor from Akpani Neke.

"We know these boys and I am pleading for the intervention of all and sundry to avoid breakdown of law and order,” Ugwuagbo pleaded.

Ikem community had written a petition to the state governor, Ifeanyi Ugwuanyi and the state Commissioner of Police.

In the petition, Ikem community had accused Neke community of breaching security in the local government through persistent invasion, abduction and forceful encroachment into Ikem community in a land dispute already settled by Enugu state Boundary Committee in 2012.