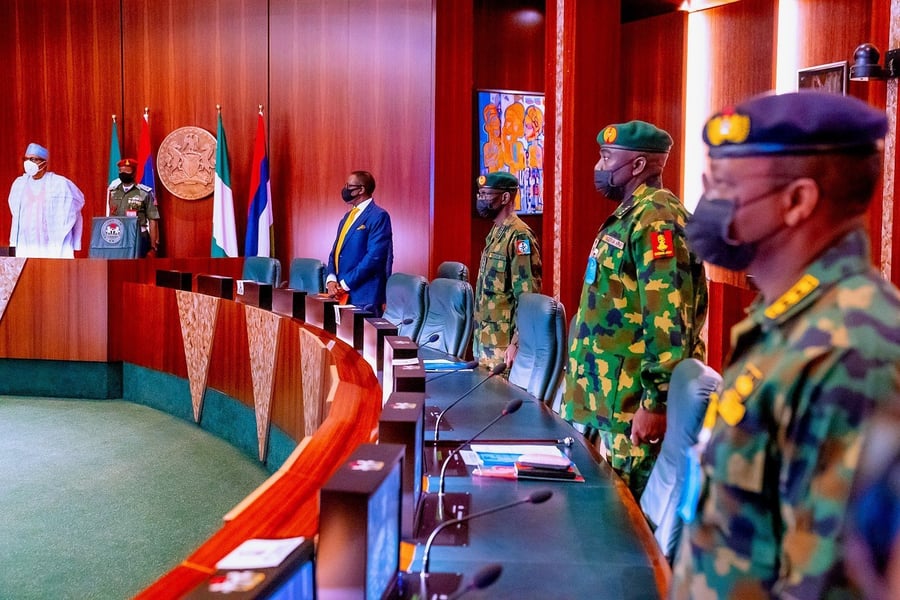 In late July and barely few hours after terrorists threatened to abduct Nigeria’s President and Commander-in-Chief, Muhammadu Buhari and Kaduna Governor Nasir El-Rufai in a viral video, troops of the elite Presidential Guards Brigade were ambushed and  attacked by terrorists  along the Bwari-Kubwa road where a Captain, Lieutenant and six soldiers reportedly lost their lives in the capital city of Abuja.

An aspect of the narratives indicated that one of the terrorists’ targets, in that major onslaught against the Nigeria government, was the campus of the Nigerian Law School in Bwari.

For fear of further attacks, the management of schools closed down and alerted  parents on the urgent need to take their children home.

In like manner, the Federal Ministry of Education, for fear of impending bandits and terrorists’ attacks, directed the immediate closure of all unity schools domiciled in Abuja, while ordering immediate evacuation of students.

Before then, the Islamic State West Africa Province militants, a breakaway faction of Boko Haram, attacked the Presidential Advance Team to Katsina State before the last Sallah Holidays.

In addition and within the same period under review, specifically in the first week of July, ISWAP used explosives and guns to attack Kuje Prison in Abuja.

About six cars and buses were damaged during the attack.

Four prisoners and a security official were also killed.

Over 800 prison inmates escaped during the attack with about half of them still at large.

Those still at large include over 60 Boko Haram suspects.

Without a doubt, the fall of Abuja to terrorists is the peak of humiliation as a country.

The tactless and amoebic defence and security arrangement implemented by security chiefs have showcased Nigeria as the most retrogressive in the comity of countries in the world.

Shutting down schools because of insecurity is very worrisome and the lowest a country can descend.

Obviously, a banditry sector has been created.

Within the last few months, the banditry sector would have benefited in over a billion dollars from ransom taking.

So bad has the situation become that Governor Mohammed Matawalle  of Zamfara State directed citizens in the state to obtain guns to defend themselves against bandits, a move many see as a sign of the final collapse of Nigeria.

The Zamfara Government equally gave orders for immediate closure of markets in three senatorial districts as a result of the escalating activities of terrorists in various parts of the State.

To demonstrate its seriousness, governor Matawalle  has concluded arrangement to distribute 500 forms to each of the 19 Emirates in the state for those willing to obtain guns to defend themselves.

Reacting to the development, human rights lawyer, Femi Falana, SAN described it as “A free-for-all affair,” adding: “These are all signs of imminent collapse of the Nigeria state.”

With all these, it is instructive to note that whenever armed gangs control the instrument of violence, the state has collapsed or is about to collapse.

The enormity of the security challenges across Nigeria is the best definition of a failed state.

In the face of all this, the Islamic State West Africa Province (ISWAP) and Boko Haram seem to be in perfect control of the entire Nigerian system.

In the 2022 budget passed and signed by President Muhammadu Buhari, the Ministry of Defence is to spend the sum of N1.52 billion on security operations, as well as various sums for capital expenditure and welfare packages for officers.

Despite this humongous sum at the disposal of service chiefs, soldiers are deployed into terrorists’ enclaves blind with double-barrel guns even when technology is the ultimate instrument in modern warfare.

No single intelligence is deployed into operations.

What sends jitters into the spines of innocent citizens is the way ISWAP kills and captures Nigeria’s elite soldiers like chickens.

If elite soldiers from the presidential guard are on a mission to rescue people in distress, aren’t they supposed to be ready for trouble?

How come they just got captured and killed by a so called rag-tag army of vandals?

If elite soldiers can be routed so easily, where are the helpless and hapless civilians to turn to?

Over time, the National Association of Online Security Reporters (NAOSRE) has lived up to its billing by encouraging citizens through numerous editorial persuasions to co-operate with military personnel in the fight against insurgency.

But it does seem that service chiefs who are at the commanding heights to co-ordinate all supporting channels for result-driven operations are square pegs in round holes.

The failure of the security chiefs partly informed the reasons the once cohesive administrative posture of the legislative and executive arms of government at the federal level has been punctuated with Senators baying for the blood of President Buhari with impeachment threats.

The Senators are of the conviction that the ambush and killing of a platoon of the elite Brigade of Guards in Abuja are enough warnings that the terrorists are possibly planning to overrun the federal capital, adding that the Commander in Chief is a failure.

Indeed, insecurity is spreading fast. Those very close to the seat of power and perceived safe areas in Abuja are afraid.

Abuja residents are scared. Some are already relocating to other places and countries. The situation at hand is that bad.

Available information on insecurity indicates that terrorists on the rampage across the country have attacked about 16 military bases since mid 2022.

In most instances, the attacks led to the killing of about 800 soldiers and many have been killed in different parts of the country.

Despite huge funding and incessant presidential directives to the military and other security agencies to deal decisively with terrorists through bilateral and multilateral arrangements to tackle the trans-border and maritime crimes, given that some of our security challenges are imported into Nigeria by foreign elements, the Nigerian Army, Navy and Airforce under the command of service chiefs, have been the lame duck.

This ugly development may have informed the reasons the House of Representatives’ Committee on Defence urged the Federal Government to engage mercenaries to tackle the growing insecurity.

Chairman of the committee, Honourable Babajimi Benson, who is in the vanguard of this option, got an upvote from a retired Brigadier General, John Sura, who described as unacceptable the way soldiers are being killed by terrorists, pointing at lack of cohesion and synergy among the security agencies.

Looking at it differently, a  security consultant, Jackson Lekan-Ojo, enthused that the bandits have  become brazen, saying, “The bandits or terrorists are fighting offensively and the military are fighting defensively.

"These terrorists have brought the battle to our doorsteps.

"They are no longer waiting for us to cross to meet them.

"Imagine being confronted on one’s doorstep and being defeated.

"Our security system and apparatus are very weak and that is what gives them the audacity to come and fight offensively in our military bases.”

Corroborating Lekan-Ojo’s position,  Yemi Adeyemi, another security consultant, lamented: “How can some miscreants say they want to kidnap the President?

"For you to know that they were not joking about it, they attacked the presidential guards brigade which is supposed to be the most fortified brigade of the Nigerian Army and killed some officers and men.

"They went again to Zuba and killed a man there.

"All the blame should go to the service chiefs who should implement presidential directives to the letter in line with national interests.”

Notably, the spate of insecurity in Nigeria has reached an alarming stage.  It has become all encompassing.

From the north to the south; from the east to the west, from one geo-political zone to the other, there’s always a scary story to tell.

And the story is that insecurity is spreading like wild fire.

It has become such a dastardly situation where no one is safe and the problem is escalating and totally getting out of control.

Travel in Nigeria, whether by road, rail, air or sea has become a nightmare.

Homes and places of business are not safe because the bandits are on the prowl.

To be in prison is not safe either. Terrorists are invading prisons and releasing prisoners across the states of the federation.

The consequence of such action is that criminals released from prisons increase the numerical strength of those already in the bush.

Having a retinue of guards does not guarantee safety.

In the south-west, there’s a surge in armed robbery, kidnapping, herder-farmer conflicts and banditry.

The Ondo State Church experience happened not too long ago.

The agitation for Biafra with its now accompanying killings, commercial crime, kidnapping, herder-farmer clashes, attacks by unknown gunmen, and banditry is now holding sway in the southeast.

In the south-south, kidnapping is  not completely over.

Boko Haram insurgency and the Islamic State of West Africa Province have been holding sway for years in the northeast.

Ethno-religious killings and banditry are known to have taken a centre-stage in the north-west.

From all indications, the escalating rate of  insecurity has cost Nigeria over 11% of its GDP worth N119 billion and projects worth N12 trillion were abandoned across Nigeria due to alarming development.

The  global peace index for 2021 compiled by the Institute for Economics and Peace ranked Nigeria 146th out of 163 countries with a score of 2.712, while among sub-Saharan African countries the country was ranked 39th out of 44 countries examined in the region.

According to experts, insecurity affects economic growth by drying out investments, increasing unemployment, and dwindling government revenue, among others.

To a very large extent, nothing is new. But what is required is a new strategy to keep the county safe.

For instance, after the amnesty by late President Yar’ Adua, a militant leader backed out. His name was John Togo.

He went back to the creek and started a massive campaign of violence against oil installations and the Military.

John Togo was highly trained and intelligent. But Yaradua would have none of it.

He gave the military clear directives to get John Togo.

The military went after John Togo. There was no hiding place for him.

He was first smoked out of his hideout and shot but escaped. His men took him to a hospital, the military came after him but again he escaped narrowly before they came.

He ran to the creeks but the order from the President was clear.Get John Togo!

It was a clear order. There was no in-between. The Military never relented.

Thinking he was safe in his fortress, his new location was found and fighter jets dropped bombs on his camp.

He and his men perished. That was the end of John Togo.

No terrorist or bandit is bigger than the might of the Nigerian military or federal government.

If this was achieved by service chiefs at that time, it can be achieved now.

Therefore, the problems really are the service chiefs who are tactless and ineffective.