The Story Of Chukwueze: A Hero Who Scored A Winning Goal Against FC Bayern Munich 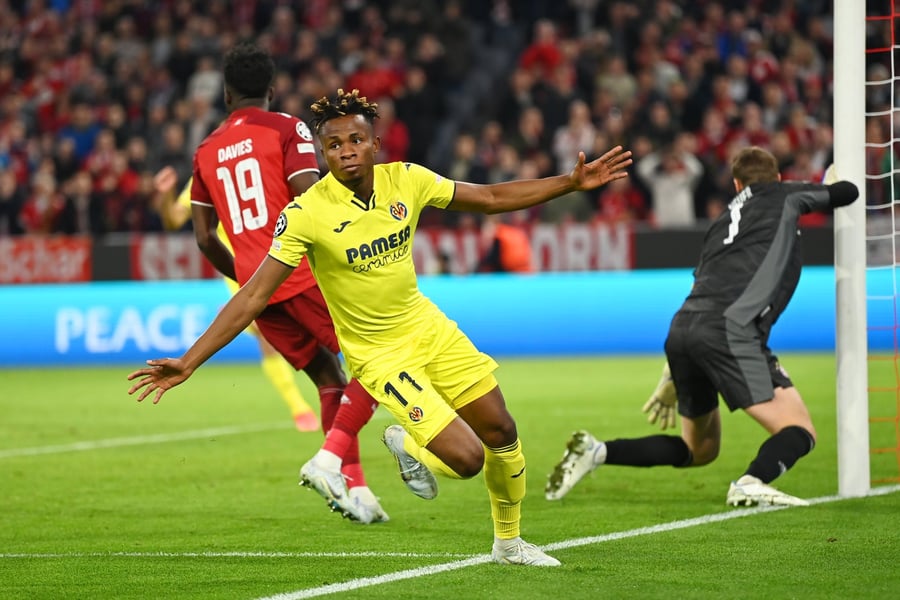 He couldn't play football because of his parents. Now he is the one, who had scored a goal on FC Bayern Munich. The story of Chukwueze.

Samuel Chukwueze had turned the game between Villarreal and Bayern Munich upside down when all had been going overtime. We will tell you about the hero of the quarter-final match of the Champions League.

On April 12, the Spanish football club Villarreal made a splash. The team had led 1:0 in the first match. However, FC Bayern Munich got ahead in the second game. Chukwueze appeared on the football field five minutes before the end of the game and scored a goal. The match ended in a draw. This score booked Villarreal’s place in the Champions League semi-finals.

Whether they'll manage to play in the finals? We'll see. We can make a bet on it. Go URL to see the list of the best betting companies to bet on the European Cup. Here's a fun fact: Samuel Chukwueze was six when Villarreal took part in the semi-finals for the last time. Chukwueze didn't play football at that time. His parents didn't let him play because they thought that sport would interfere with Samuel's studies.

Chukwueze said that he was pretty good at school although he had been obsessed with football. Samuel went to evening training despite the fact that he knew he was going to be punished." My parents told me that I would sleep outside if I got back late. My mother wouldn't let me in".Uncle Sam burned his sneakers and uniform once to prevent him from playing football.

God appeared to me and said: "Let your son play football."

Chukwueze had to give up football. One day his friends knocked on his door and asked him to go to the trials. According to them, Portuguese scouts had come to Nigeria to find talented young athletes who could participate in tournaments.

Chukwueze kept saying no because he knew his parents wouldn't let him but his friend came to him the next day at six in the morning. Samuel's mother opened the door, found out about the tournament from the boy, and woke her son up.

Samuel couldn't believe it and even refused to go. His mother shouted at him: "Take your sneakers and go!". Later she explained that she saw God who said: "let your son play. "Sam was happy he could do what he loved. But it wasn't that simple. Sam's friend was wrong: there were trials at Diamond Football Academy. A few minutes later the coach recognized Samuel's incredible talent.

Chukwueze preferred Villarreal to the best football clubs in Europe.

Chukwueze became the best bombardier of the Academy and went to that tournament in Portugal. He scored more goals than anyone there. Samuel was very good at the junior level. He was one of three football players who had excelled at World Junior Championships-2015: sixteen-year-old Victor Osimhen scored 10 goals in 7 games, Chukweze (3+4), Kelechi Nwakali (3+1).

After the great success, many scouts from different European clubs started to follow them. Chukwuese needed to choose between six football clubs: Porto, Sporting, Paris Saint-Germain, Red Bull Salzburg, Arsenal and Villarreal. He chose the last one. Samuel became friends with Pau Torres, who dropped him off at training and helped him to learn Spanish. Chukwueze achieved success in his new club quite quickly because of hard work.

• Sam debuted in the first team and scored a goal in the Spanish Cup in autumn 2018.

• He scored a goal and made an assist during the match with FC Barcelona which ended at 4:4.

• He had caused the interest of Real Madrid, Chelsea and Liverpool, but Villarreal raised his exit package in the winter of 2020.

• Sam went to the finals of the UEFA Europe League but he couldn't play there because of his trauma.

It seems like Samuel Chukwueze is entering his golden age, which he would never dream about when he was a kid.