Many fine journalists in Nigeria today are being threatened. Their art, journalism, in some of its best and most fundamental forms is also receiving unprecedented attacks. Harassment, unprovoked assault, intimidation and death threats are some of the challenges journalists are dealing with in the country.

The resurgence of separatism in Nigeria -- caused by perceived discrimination -- is one of the factors fuelling the threats to the country's fourth estate. Two now-detained men, Nnamdi Kanu, leader of the outlawed Indigenous People of Biafra (IPOB) and Sunday Adeyemo, aka Sunday Igboho, Yoruba Nation lead agitator, steer the campaign for Nigeria to break up. Both share similar goals – and a common enemy, in the Federal Government/Nigerian nation – but their ethnic bases are different. They also have massive following and very enthusiastic supportership, a vast number of whom push the separatism agenda religiously online. Many times, pro-Biafran organization, IPOB, and Yoruba Nation pushers deploy propaganda tools, masking false information as true. But when fake news combatants do their job, they are sent death threats. 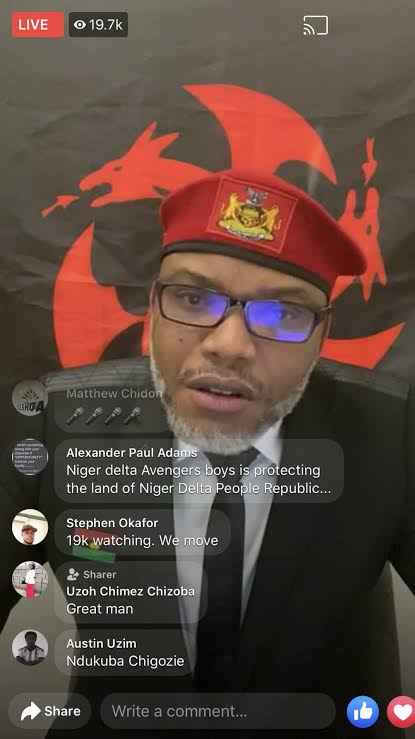 Nnamdi Kanu during a live broadcast in December 2020

One of the country's top fact-checkers, Mayowa Tijani, who is fighting misinformation, is being delivered dangerous messages via backers of separatism in Nigeria. The journalist said Kanu was furious with one of his checks, triggering a hostile response.

"There was a particular one that really got to him and he went live on Facebook and he was reading the fact check to his followers," Tijani narrated.

"There were about two thousand people watching at the time. Of course, hundreds of thousands would later watch the video. He said a lot of foul language, a lot of threats, basically trying to intimidate myself and a journalist I spoke to at the time about him (Kanu), about the story we were working on.

“The way we (AFP) handled it (the threat): I had to leave Lagos, I had to go to another city for a while. I stayed off social media for a bit.

“So some of his (Kanu’s) boys sent me messages, on Twitter, on Facebook, some of them even still follow me on Twitter till date, such that when I tweet some things, they come under it to come and abuse me, or try to intimidate me and all that. But so far, of course, I’m still here, I’m still around, I’m still alive. And I don’t think that I have any other problem aside from just being careful every now and then," Tijani, who works with The Cable and AFP Fact Check said. 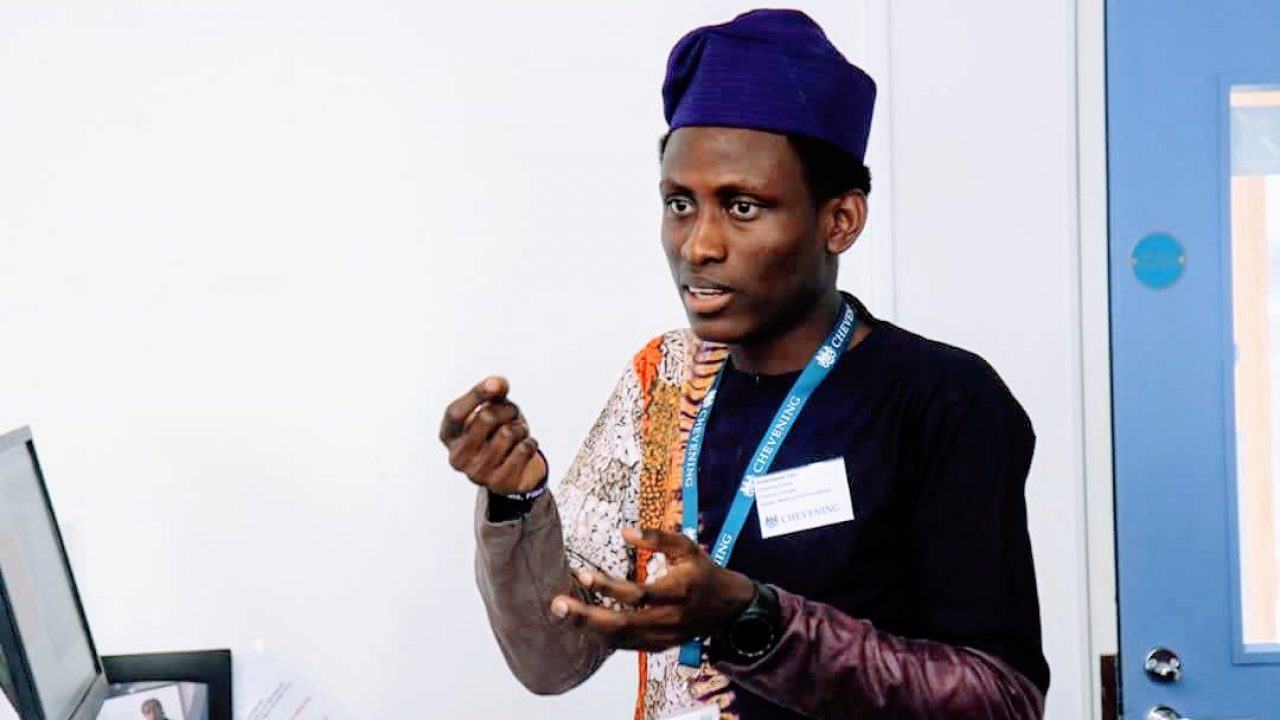 Earlier in 2021, having recognized him as a journalist, Yoruba Nation separatists who were present in court in solidarity with Sunday Igboho, lunged at Tijani, and for no cogent reason, threatened to exterminate him. 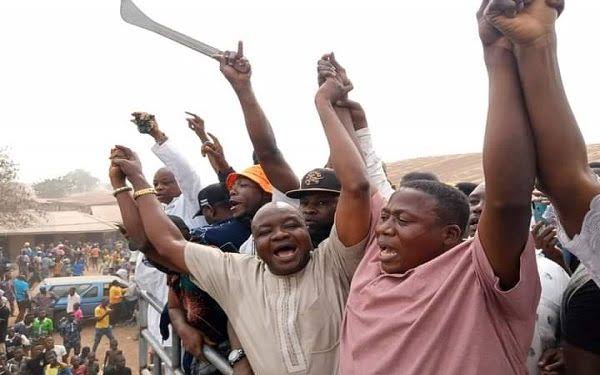 Sunday Igboho at a rally

“On the other side, in July, I went to Cotonou, Benin Republic to report the Sunday Igboho story, and his supporters attacked me in front of the court of appeal, and some of them threatened to kill me. Some of them beat me, like trying to harass me, hit me on my head, and one woman was trying to slap me.”

Online threats are a growing impediment to press freedom, but Obiejesi Chukwunaeme Kingsley, a journalist with BBC News Igbo does not want to be deterred. He and his colleagues constantly get threats from people affiliated with IPOB.

He had written on his known Facebook page on September 1: “As a journalist working with BBC Igbo Service, I am not new to death threats.

“Myself and my colleagues get death threats on a daily basis. Sometimes it hurts, but most times I laugh it off.

“The interesting thing is that the people that threaten to kill me and my colleagues, are the same people that refer to themselves as “Ụmụ Chineke” or “ụmụ Chukwu okike Abiama”. Is it not funny?

“I am not allowed to join issues with these death mongers, but whenever I see the threats, I reply in my heart: “My name is Chukwunaeme. Ejirọ ọnwụ eyi m egwu.”

In August 2019, Ike Ekweremadu, a serving senator from Enugu state was beaten up by Biafra agitators (who all have Nigerian descent) in Nuremberg at an event put together by 'Ndigbo Germany'.

IPOB claimed responsibility for the attack and said it “should serve as a warning” to Igbo leaders. Unlike how such assaulters go scot-free in Nigeria, four IPOB members involved in the assault were prosecuted by German authorities.

On many occasions, proponents of the group have accused the Nigerian government of intolerance of dissent, but these separatists are also guilty of the same.

A young man told this reporter how he was almost physically assaulted, in 2018. The instigation was his refusal to give support to IPOB. At the height of Nigerian Army’s ‘Operation Python Dance’, he had gone for lunch at a restaurant in Enugu State, South-East Nigeria, random people started discussing politics, and he joined in. What followed was an attack.

“I was verbally attacked, and was almost physically assaulted. This was in 2018 before IPOB became the menace they are today. Then, many people weren’t even really aligned with IPOB, many just wanted out of Nigeria,” the man who opted against mentioning his name citing his own personal safety explained. 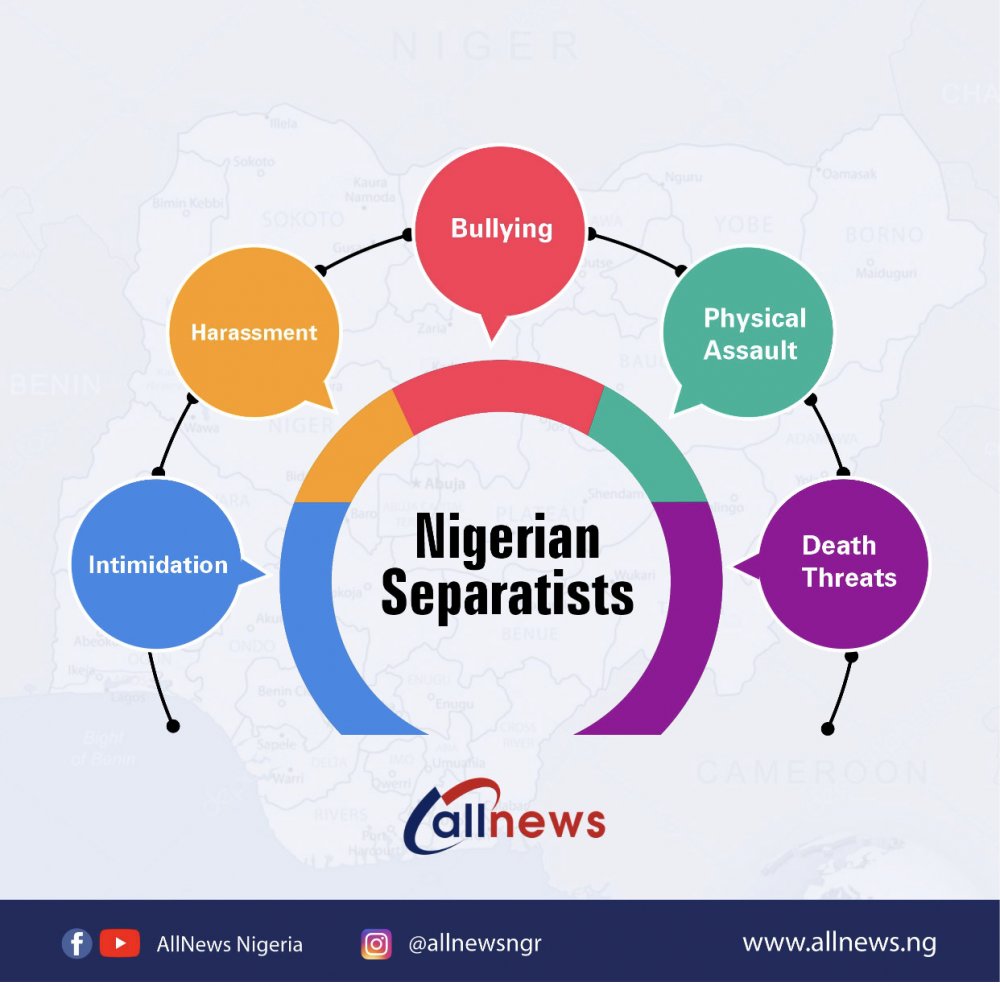 Separatists-inspired death threats are terrorising fellow citizens. Fredrick Nwabufo, a columnist, journalist and thought leader, has long been getting online death threats from members of IPOB.

He first had a brush with the banned group in June 2019 when he wrote an article asking the south-east to cooperate on security with Miyetti Allah, an advocacy group that promotes the welfare of pastoralists in Nigeria. Irked by the article, IPOB members sent threats. In 2020, he decided to file a petition to Nigeria’s secret police, the Department of State Services (DSS) when the threats escalated. During an interview with AFP Fact Check on August 14 of that year, the journalist stated that the movement’s supporters see President of Nigeria, Muhammadu Buhari as an obstacle to the “realization of their separatist goals”, and employ the body-double narrative to “de-legitimise” the Buhari administration.

This did not sit well with the group, and Kanu issued threats in one of his routine broadcasts.

“Friends and family in the south-east have been calling me to inform me that IPOB is looking for me. They also expressed fear for their own safety. This is one threat too many. Members of IPOB had issued similar threats before. But this is more targeted – with my photo and an insidious message which has been circulated on social media by agents of the proscribed group.

“I have decided not to recline. The security agents will be involved this time,” Nwabufo said at the time. 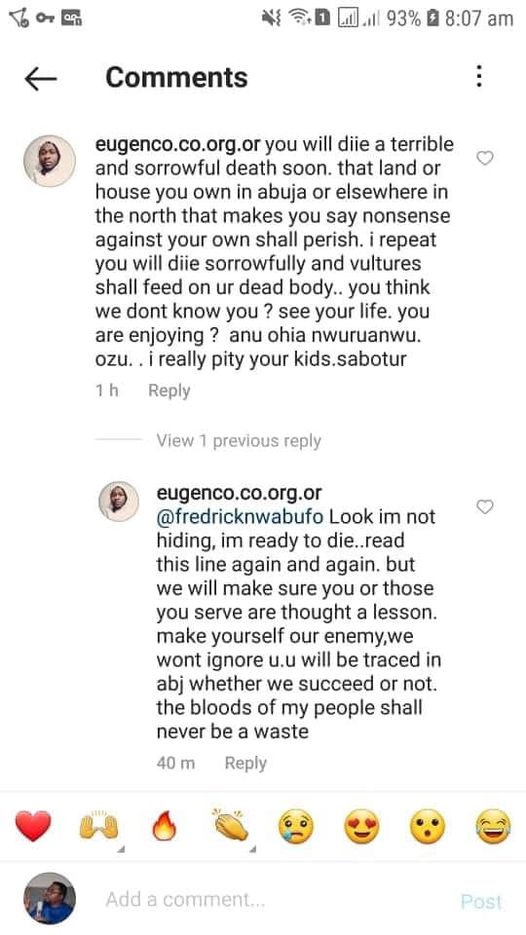 Until now, the threats have not ceased – as apparent in the post above by an Instagram user, eugenco.co.org.or which Nwabufo shared on his Facebook page in July 2021. 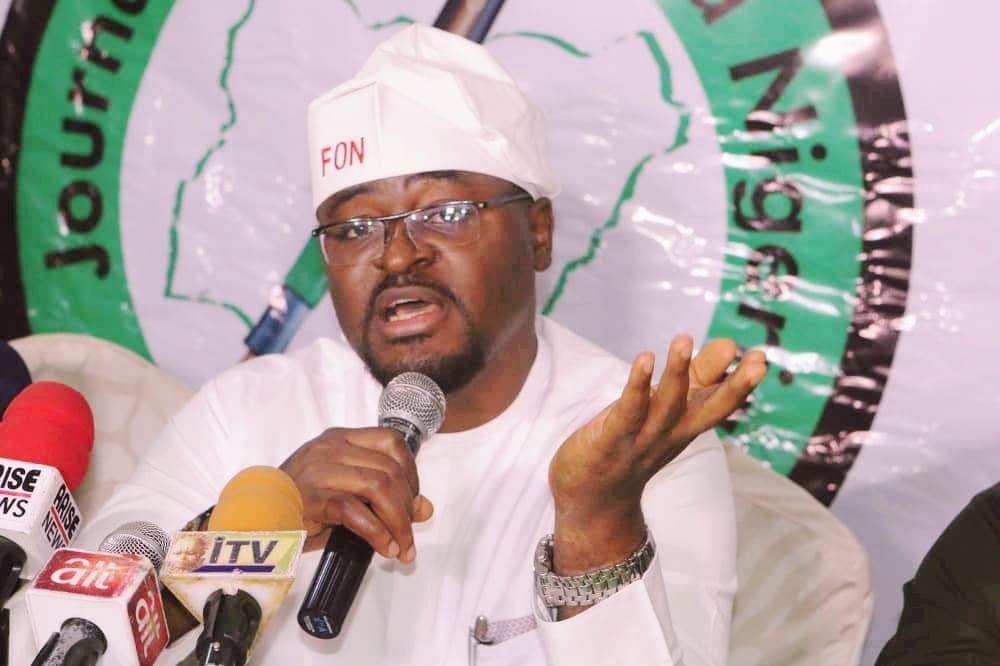 In a chat with this reporter on 8 September, Nwabufo sees separatists’ threats as strong. “The threats are potent, but the antagonist may lack the capacity, chance or opportunity to carry out the threat. We are all too aware of the murderous activities of that separatist group (IPOB),” he said.

In most jurisdictions, death threats are a serious type of criminal offence. In Lagos for instance, Sections 5, 56 and 411 of the Criminal Law of the state, 2015 touches on this: Section 5 stipulates a six-month jail term for attempting to commit a misdemeanour, while Section 56 stipulates a one-year jail term for threatening violence.

Where there are immediate concerns regarding one’s safety, people are advised to submit a petition to the Police Force Headquarters, and agencies like the DSS and the National Human Rights Commission (NHRC).